Speaking to reporters after a lunch with New Hampshire business leaders in Nashua, the second-time candidate, who has yet to publicly announce his presidential campaign, said that after electing first-term Sen. Barack Obama in 2008, voters don’t want to take the same risk again. Perry declined to say whether he believes Sens. Ted Cruz, Marco Rubio and Rand Paul are qualified to be president.

In his roundtable with the business leaders, the longest-serving governor in Texas history said he understood why people gravitated to Obama, but argued that his lack of experience let the country down. “I think he was talented, he was a unique individual,” Perry said, “but he had no executive experience, and I think the country is seeing the cost of that.”

Perry compared electing a well-spoken Senator to flying on a plane from Boston to London with a charming pilot who can explain the theory of aerodynamics, but has only 150 hours of flight time. “Or do you want to be with that grizzled old 20,000-hour captain who has taken that airplane back and forth thousands of times safely,” Perry asked.

“That’s the juxtaposition of a young inexperienced United States Senator versus a skilled, experienced executive,” he continued. “I just think the American people are going to want an executive after eight years of Barack Obama — I’m thinking they’re going to want to have somebody who has got a real track record: don’t tell me, show me.”

Perry, 65, addressed concerns that he is among the older generation of Republican candidates, quipping to reporters, “I’m just filling out my Medicare card, so I hope they don’t hold my age against me.” 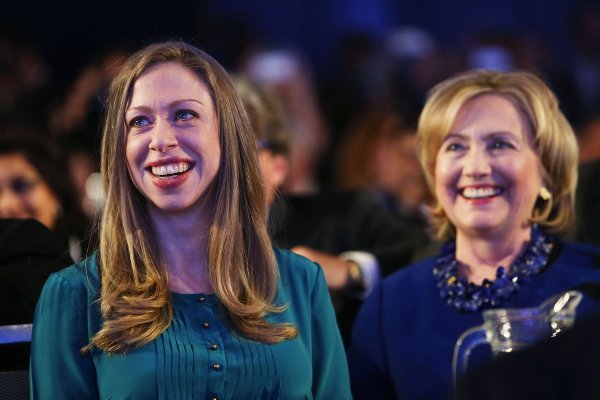 Chelsea Clinton Gets Ready to Take the Stage
Next Up: Editor's Pick