What Ayaan Hirsi Ali Doesn’t Get About Islam

Getty Images
Ideas
By Carla Power
Carla Power is the author of If The Oceans Were Ink: An Unlikely Friendship and a Journey to the Heart of the Quran (Henry Holt, April 2015).

The author Ayaan Hirsi Ali has called for an Islamic reformation. Her new best-seller Heretic proposes five ways that Muslims need to change their faith so that it sits neatly with her notion of modernity. In a book that reads like a home-made intellectual bomb – a cobbling together of the most vicious examples from Muslim societies – she argues, among other things, that Muslims should rethink the status of Muhammad as infallible and question whether the Quran is truly the word of God.

That’s not going to happen, not in a faith whose bedrock creed is that ‘There is no god but God, and Muhammad is his Messenger.” Muslims revere the Quran as the word of God, as revealed to their beloved Prophet Muhammed in 7th century Arabia. To demand that Muslims question the Quran as divine or the prophet as the perfect human is just unthinkable for the vast majority of believing Muslims. It’s also an evisceration of Islam’s fundamental principles, akin to taking a giant eraser to the bits about justice and liberty in the preamble to the American Constitution. As such, Hirsi’s proposal is not so much a proposal as an imperial decree, a tone-deaf declaration rather than an opening of a conversation.

Hirsi’s proposal for a reformation may be a non-starter, but that’s not to say that there’s no hope for a reformation – or rather, given mainstream majority Islam’s lack of a centralized structure – for reformations. Indeed, change is afoot, not just from radical outliers and dissidents, but from Muslims working inside the mainstream tradition. Across the world, Islamic scholars are going back to the texts, peeling off the medieval interpretations that have hardened into truths, and searching for their own answers in the Quran and the Hadith.

As every generation of Muslims has done since the 7th century, modern Muslims are seeking to interpret the spirit of the divine text in light of the mundane realities of its followers. The difference today are the effects of large-scale Muslim migration to the West and modern technology. Education, mobility, and access to information have lead to opportunities of new interpretive freedoms, sped up by the breakdown of the stature of the traditional Islamic authorities. This process cuts both ways: It has made it easy for the Kansan teenager wondering about whether Islam allows her to write her own marriage contract (it does), and it’s also made it easy for fundamentalists to spread a message of intolerance. The same historical disruptions that have produced the horrors of Al Qaeda and ISIL have also produced increasingly confident Muslim activists and scholars, who are working to square their understandings of the Quran’s divine message with universal human-rights norms.

Unlike bombs or beheadings, these gentle disruptions don’t make the news. Earlier this year, the conservative scholar Mohammad Akram Nadwi reversed his acceptance of child marriage – a practice generally allowed in medieval Islamic jurisprudence – after two of his female students told him of the ways they’d seen the practice ruin girls’ lives. He also found a fatwa from an 8th-century scholar denouncing the practice. In other words, he found ways to change his understanding of his faith from within.

Too often, non-Muslims and Muslims alike don’t know enough about Islam to see how flexible Islamic laws can be. Like the violent extremists she rightly opposes, Hirsi takes the Quran and the Prophet Muhammad’s example to be an unbending set of rules and Islam to be “the most rigid religion in the world.” However, its flexibility was one of the reasons it could spread so effectively from Arabia through Asia and Africa, allowing local practices to remain as long as they didn’t contravene its basic tenets.

How could Islam be a rigid set of one-size-fits-all edicts, as the zealots claim, when it’s a faith with followers who range from dreadlocked Oakland grandmas to Hyderabadi mystics to French businessmen? How could it be rigid when interpretations range so widely, running the gamut from bans on women driving (see Saudi Arabia) to giving women the right to lead countries (see Pakistan and Bangladesh)? Such is the decentralized nature of Islam’s majority Sunni sect, which lacks an organized clergy, that it allows followers to go from scholar to scholar until they find an opinion that matches their own.

To reform, Islamic societies need more Islamic education, not less. The Prophet Muhammad warned his followers against blind faith. A famous anecdote tells of him coming across an Arab nomad walking away from his camel, having neglected to tie it up. When he asked the man why he didn’t secure the beast, the man said, “I put my trust in Allah.” Muhammad’s answer was pithy: “Tie your camel first – then put your trust in Allah.” 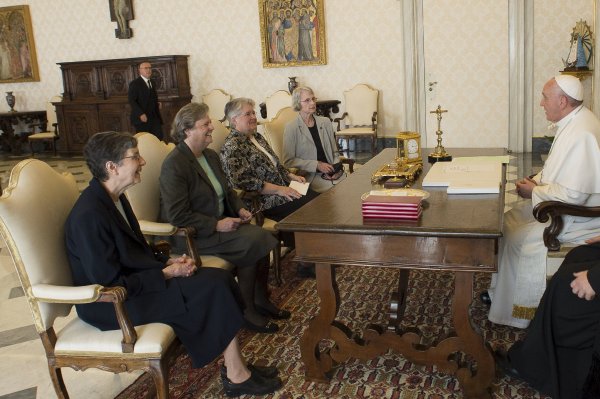 Finally, Affirmation for Nuns
Next Up: Editor's Pick