Sen. Marco Rubio is rarely on the same side as President Obama. But the Florida Republican, who is running for president in 2016, recently drafted a letter to the White House in support of Obama’s signature free-trade deal, the Trans-Pacific Partnership, which Congress is expected to vote on this term.

This odd-bedfellows moment backs Hillary Clinton, who announced this week that she is running for President, into a particularly uncomfortable corner — sandwiched between Republicans and centrist Democrats on one side, and the Democrats’ liberal, activist base on the other.

So far, Clinton has kept quiet about whether she supports the deal.

Most Republicans, the Obama administration and a powerful coalition of business interests, some of whom have donated to Clinton’s campaign, would like to see the former Secretary of State champion the Trans-Pacific Partnership. They argue that the sweeping, 12-nation free trade pact, the largest-ever for the United States, would been a boon for the U.S. economy.

“We stand ready to work with you to ensure quick consideration and approval of legislation to renew TPA,” Rubio wrote in the draft letter to Obama, which was obtained by TIME, in reference to the Trade Promotion Authority, the so-called fast track bill designed to facilitate the passage of the trade deal. “We must work together to ensure that goods and services created by U.S. workers are able to enter and effectively compete in overseas markets.” Rubio’s office declined to comment on the letter.

Meantime, an increasingly vociferous coalition of liberal lawmakers, labor leaders and grassroots populists, whose support Clinton will need during the primary campaign, have warned Clinton that they deeply oppose the pact, which they describe as a job-killing sweetheart deal for global corporations.

“People feel a lot of urgency and tension around this moment,” said George Goehl, the executive director the the National People’s Action, a network of progressive, grassroots organizations nationwide, in a press call Thursday morning.

“This is not a theoretical question for [Clinton] to answer,” he added. “It’s real-life right now and people want to know where she stands.”

On Wednesday night, Vermont Sen. Bernie Sanders, a potential Democratic presidential candidate who has been one of the loudest voices in Congress in opposition to the deal, rallied members of the progressive organization, Democracy For America, against the bill during a conference call. “The only way a member pays the price [for supporting TPP] is if the poeple are educated and organized,” he said, adding later that “What we have got to do is rally the American people and educate them and put pressure on vulnerable members.

“Keep the emails coming, put the pressure on,” he urged.

Clinton’s silence about the Trans-Pacific Partnership has sent both supporters and critics into spirals of speculation.

In her most recent memoir, Hard Choices, published last year, Clinton expressed limited support for the deal. “It’s safe to say that the TPP won’t be perfect,” she wrote. “No deal negotiated among a dozen countries ever will be — but its higher standards, if implemented and enforced, should benefit American businesses and workers.”

But during her 2007 run for the White House, she explicitly distanced herself from the last big free trade deal, the North American Free Trade Agreement which her husband signed in 1994, and said she would not pursue any new trade deals for a while.

After supporting NAFTA as first lady and in her 2003 memoir, Living History, Clinton said in an interview with CNN in 2007 that it “was a mistake to the extent that it did not deliver on what we had hoped it would, and that’s why I call for a trade timeout.”

Ohio Sen. Sherrod Brown, a liberal Democrat who has been outspoken about his opposition to the Trans-Pacific Partnership, refused to speculate on Clinton’s position on trade. “I’m not going to go there. Hillary’s got a history. I’m pretty sure she was against fast track, against CAFTA. [She] spoke out in ’08 that we should renegotiate NAFTA,” he said Thursday. “So you make an assumption that Hillary is bad on trade but you would be wrong, I’d think.”

The Senate Finance Committee proposed a fast-track bill on Thursday afternoon that would give Obama the power to submit the trade pact to Congress for a simple up-or-down vote with no amendments. Supporters of the Trans-Pacific Partnership say such legislation is crucial as it assures other countries that Congress won’t significantly change the deal during debate.

Opponents, including Sens. Brown and Elizabeth Warren, have called the fast track undemocratic, in part because it makes it easier for negotiators and lobbyists to insert provisions into the trade deal that Congress would not approve individually.

The populist base has also railed against the non-transparent, and sometimes downright secretive, process surrounding the Trans-Pacific Partnership negotiation process. As of last fall, a network of 566 stakeholders, 85% of whom represented industry and trade groups, were given limited access to the draft trade agreement, according to the Washington Post. Although more stakeholders have since been invited to access the document through a secure website, the details of the agreement, which will include twelve nations in the Asia-Pacific region, have not been made public or provided to the press. Even lawmakers have not been given copies of the draft plan.

In the coming weeks, Clinton will be asked, probably repeatedly, to take a strong position on the Trans-Pacific Partnership. If she opposes it, she risks alienating a slew of powerful, corporate interests. But if she doesn’t, she risks the rage of the populist left. And if she does nothing, she’ll lose points with both sides and be criticized by pundits for ducking a major issue.

“It’s a choice between a corporate vision of a world economy and a vision in which … workers’ rights and sustainable development is allowed by the legal system,” Roger Hickey, the co-director of Campaign for America’s Future, said on a press call Thursday morning. “It’s a big issue.” 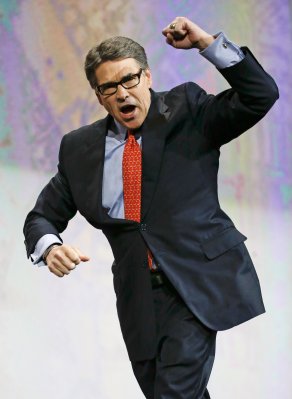 Perry Compares Cruz, Paul and Rubio to Obama
Next Up: Editor's Pick