Here Are the 5 Things TIME 100 Says About the World

Malala Yousafzai after being announced as a recipient of the Nobel Peace Prize in Birmingham, England on Oct. 10, 2014.
Christopher Furlong—Getty Images
By Bryan Walsh

The annual TIME 100 list of the world’s most influential people is out—and looking very international. Fifty-one selectees were born outside the U.S., ranging from national leaders like Tunisia’s Beji Caid Essebsi to financiers like Brazilian multi-billionaire Jorge Paulo Lemann to artists like the novelist Haruki Murakami—a favorite of mine, as I’ve been trying to get him on the list since around when the TIME 100 started in 2005.

It’s a large and diverse list, hailing from five continents. But there are a few lessons we can draw from who made the TIME 100–and who didn’t:

1. Asia has a crop of strong leaders: China and India may be two of the most dynamic countries in the world, but for years their leaders were anything but. From 2002 to 2012 China was run by the colorless and cautious President Hu Jintao, though most decisions were made not by the president alone but through consensus among the top tier of the Communist Party. In India, Prime Minister Manmohan Singh presided over a decade of increasingly listless rule, ending in 2014 when he left office at the age of 81.

But today, both China and India are run by forceful leaders eager to to put their stamp on history. In the TIME 100 issue President Barack Obama notes that Indian Prime Minister Narendra Modi has “laid out an ambitious vision to reduce extreme poverty, improve education, empower women and girls and unleash India’s true economic potential.” Unlike many of his predecessors, Modi has worked to lead from the front, and he’s already carved out an impressive international profile—not too many other international leaders can pack Madison Square Garden for a speech, as Modi did last September.

If anything, Chinese President Xi Jinping is even more powerful—and more determined to exert direct control of his country. In the TIME 100 former Australian Prime Minister Kevin Rudd—a Mandarin speaker and China expert—writes that Xi is now “likely to be China’s most powerful leader since Mao.” That’s not always a good thing. While Xi is carrying out reforms that are needed to make China’s economy more sustainable, he’s also ruthlessly cracked down on civil society and challenged the U.S. for global leadership. Joining Xi on the list is his tough-minded Internet czar Lu Wei, who’s strengthening the Great Firewall.

A third new Asian leader also made the list: new Indonesian President Joko Widodo. Former World Bank president Paul Wolfowitz writes in the TIME 100 that Widodo “has brought youthful energy and a popular touch to his large and diverse nation.” But after a promising start last fall, Widodo has faltered in his first year in the office—as Wolfowitz goes on to note, he’ll need to “overcome the entrenched interests in Indonesia that resist change.”

2. Latin America…not so much: Just one Latin American leader made the TIME 100 this year. From Mexican President Enrique Pena Nieto—dodging corruption allegations and public anger over a bloody drug war—to Brazilian President Dilma Rousseff, who may be impeached just a few months after winning re-election, it can seem like every Latin American leader is struggling to stay above water. Even politicians who have had success in the past are flailing—Chile’s widely respected President Michelle Bachelet, who was on last year’s TIME 100 list, has seen her family tainted by corruption allegations.

The one leader bucking trend: Cuban President Raul Castro, who has presided over a historic rapprochement with the U.S. And the region has influencers outside politics. Two Brazilians made the list—the surfing champion Gabriel Medina and the multi-billionaire dealmaker Jorge Paulo Lemann (who’s no slouch of an athlete himself, winning Brazil’s national tennis championship five times in his youth). The courageous Guatemalan human rights activist Aura Elena Farfan was saluted for “fighting for justice for the tens of thousands who were disappeared or killed during the civil war. CNN’s Christiane Amanpour hailed Telemundo anchor Jorge Ramos, born in Mexico City, as a reporter “determined to get an answer or go down trying.”

3. Japan is a cultural superpower: Japanese Prime Minister Shinzo Abe didn’t make the TIME 100 list this year—though having been decisively reelected in December, he had a pretty good claim. But two other representatives of Japan did. The home organizing maven Marie Kondo introduced audiences around the world to the happiness of a scrupulously clean living space. (Her most important piece of advice: if an object doesn’t bring you joy, chuck it out.)

And the novelist Haruki Murakami more than earned his spot—his most recent novel sold half a million advance copies in Japan before it was even printed, and became a bestseller around the world. For the TIME 100 we paired him with his countrywoman Yoko Ono, who knows a thing or two about succeeding globally, who celebrated Murakami’s “great imagination and human sympathy.”

4. Africa’s time is now—and Nigeria leads the way: Seven Africans made the list—and more came from Nigeria than any other country. That includes the new president-elect of Africa’s most populous nation, the man TIME’s Aryn Baker called a “born-again democrat” who will face the difficult challenge of defeating the Boko Haram insurgency. Doing so could mean killing another TIME 100 selectee: Boko Haram’s enigmatic leader, Abubakar Shekau, whom retired U.S. General Carter Ham warns “is the most violent killer their country has ever seen.”

But the African spots on the TIME 100 list go beyond strongmen. We selected Obiagali Ezekwesili, an anticorruption activist in Nigeria who has dedicated her life to ensuring that the hundreds of girls kidnapped by Boko Haram aren’t forgotten. The actor Idris Elba hailed Dr. Jerry Brown of Liberia for his heroic work to help stop the Ebola outbreak that killed thousands in West Africa. “It is because of this man’s actions—rather than his words,” Elba wrote, “that many lives were saved.”

5. Women are changing the world: Women make up nearly half the TIME 100 list, ranging from the pinnacle of power to activists on the ground. The German Chancellor Angela Merkel isn’t just the most powerful women in the world—she’s one of the most powerful people period. “Angela Merkel,” writes Ukrainian President Petro Poroshenko, “managed to leverage German economic power into diplomatic power.” France’s Marine Le Pen isn’t loved by everyone, but she’s become a major force in French politics—and Europe could be next.

But for every political or business leader, there are women like Chai Jing, the courageous Chinese journalist whose environmental documentary Under the Dome was watched by more than 200 million people in China. Dr. Joanne Liu, the Canadian-born head of Doctors Without Borders, got the Ebola crisis right when so many of her peers got it wrong. And of course, there’s Malala Yousafzai, the young Pakistani activist who first made the TIME 100 in 2013 at age 15. All she’s done in the meantime is win a Nobel Peace Prize—so we decided to put her on the list again. And that gave us the chance to publish another young woman, the Syrian Mezon Allmellehan, who wrote that “yes, I can make a difference, and I have to continue to fight for what I believe in.” Fitting words for an extraordinary—and influential—collection of women and men from around the world. 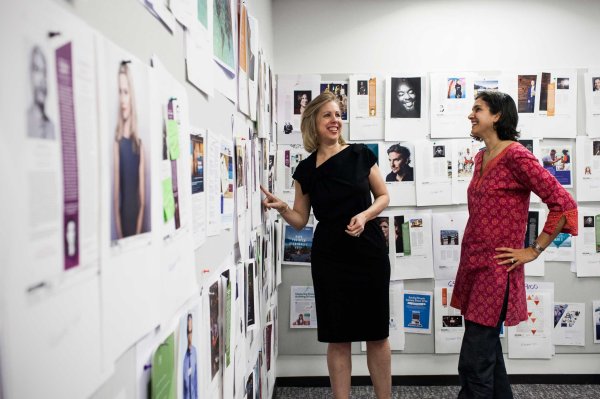 How We Pick the TIME 100
Next Up: Editor's Pick