In our annual TIME 100 issue, we tell 100 stories of individual influence. But taken together, these stories are an anthem to interaction, the convergence that occurs when you harmonize a good idea.

The technology that connects us also connects our worlds, of art and science and business and politics. So when we were debating whom to approach to write for this issue, we looked for people who could speak to their subject’s influence in all its dimensions. Entrepreneur Elon Musk writes about Kanye West’s “long game” as the music superstar moves into the worlds of fashion, design and philanthropy. Apple CEO Tim Cook is running the most valuable company on earth—but Congressman and civil rights icon John Lewis writes about how Cook has also used his position to elevate issues from privacy to the environment to LGBT rights. Former New York Times executive editor Jill Abramson writes of actor Emma Watson’s work promoting gender equality as a U.N. Women goodwill ambassador.

For the third straight year, education activist Malala Yousafzai, 17, is the youngest person on the list. Two years ago Chelsea Clinton wrote about her; this year the tribute comes from Mezon Almellehan, a Syrian refugee in Jordan who was inspired by Malala to urge girls in her refugee camp to focus on going to school. “Education,” Mezon writes, “ is the only way to regain our spirit and control over our lives.” The oldest person on the list is Tunisian President Beji Caid Essebsi, who at 88 finds himself the steward of the Arab world’s youngest democracy.

Some jobs are best understood by those who have themselves faced the fire. We asked President Barack Obama to write about India’s Prime Minister Narendra Modi. British Prime Minister David Cameron explores Haider al-Abadi’s mission to hold Iraq together. Petro Poroshenko, the President of Ukraine, writes on German Chancellor Angela Merkel as they wrestle with how to challenge the aggressions of Vladimir Putin. The King of Jordan writes on the new King of Saudi Arabia even as the map of the Middle East looks increasingly blurry.

At TIME we know that great minds don’t all think alike: politicians from very different ideological compass points are on the list because of their ability to steer our conversation in new directions. However much they may disagree, they recognize this quality in one another, which is why we asked Antonin Scalia to write on his fellow Supreme Court Justice Ruth Bader Ginsburg. “What only her colleagues know,” Scalia says, “is that her suggestions improve the opinions the rest of us write, and that she is a source of collegiality and good judgment in all our work.” Charles Koch and David Koch are best known for their industrial wealth and conservative activism, yet, as Senator Rand Paul writes, they are also champions of criminal-justice reform looking to fund more public defenders, overhaul sentencing and help parolees re-enter society. Anti-tax crusader Grover Norquist may extravagantly disagree with liberal economist Thomas Piketty’s crusade to reduce income inequality, but he notes in his piece that “every prominent Republican has taken up the challenge,” which speaks to a popular influence uncommon to academics who write 700-page tomes in French.

Every year we hope the TIME 100 will introduce you to influential people you might not have met before and encourage you to find out more about them. That’s why we’ve featured a selection of books authored by honorees on this year’s list, from ballerina Misty Copeland’s memoir Life in Motion to Magnus MacFarlane-Barrow’s account of how he came to found his charity Mary’s Meals.

This double issue was designed by Chelsea Kardokus, with Natalie Matutschovsky as photo editor. For the sixth year, the issue was overseen by deputy managing editor Radhika Jones. “I’ve come to think of it as the TIME 200, because of all our influential contributors,” she says. “It’s so rewarding to put together these pairings of mentors, collaborators, rivals and friends.” 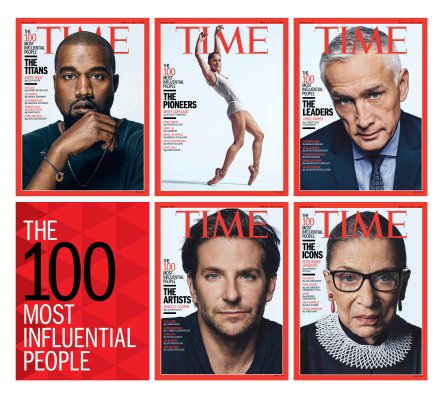