Another Similarity Between Lincoln and Obama: They Polarized the Nation

Americans yearn for an end to political polarization and partisanship, and many today fault President Obama for failing to achieve consensus on his major initiatives: health care, immigration reform, foreign policy and so on. But consider Abraham Lincoln. From their state of origin to their legal backgrounds, the two presidents have drawn many comparisons, and here’s another: Despite his various efforts at outreach, our sixteenth president was, in life, an intensely polarizing and partisan figure, every bit as polarizing and partisan as our current president.

Lincoln’s presidency, which ended exactly 150 years ago today, sharply differed from the experience of his predecessors. Before Lincoln, five presidents had won a second term: George Washington, Thomas Jefferson, James Madison, James Monroe and Andrew Jackson. Each had carried both North and South in at least one of his presidential bids. By contrast, Lincoln was purely a regional candidate, despised by intense majorities in a large chunk of the country. In 1860, he received zero popular votes south of Virginia, and in 1864, none of the 11 states in Dixie held a valid presidential election, thanks to sectional war precipitated by Lincoln’s prior election. Even Lincoln’s assassination was related to regional differences: John Wilkes Booth was an intense southern partisan.

In the ensuing century and a half, many of America’s most successful presidents have managed to achieve considerable popularity in both North and South. Franklin Roosevelt, Harry Truman, Dwight Eisenhower, John Kennedy, Lyndon Johnson, Ronald Reagan and Bill Clinton all outdid Lincoln in this regard. But our current president won, twice, by following a more emphatically Lincolnian path to power—that is, a distinctly northern route: Of the 11 states in the former confederacy, Obama lost eight twice, and lost a ninth (North Carolina) once, prevailing twice only in Virginia and Florida.

In our era, as in Lincoln’s, regional polarization is on the upswing. Prior to 1850, the winning presidential candidate typically carried both North and South. But that pattern broke down in the 1850s, even before Lincoln rose to national prominence; and a similar fate has befallen Obama. At the presidential level the North and the South have backed different candidates in every one of the six most recent elections; and many states are becoming increasingly red or blue, presidentially. In 2012, only four swing states—Florida, Ohio, North Carolina and Virginia—were close enough to be decided by fewer than five points.

If we shift gears from regional polarization to political polarization, Lincoln and Obama once again appear as political doubles. Both made efforts to reach across the aisle. For example, Lincoln, a Republican, chose a former Democrat, Edwin Stanton, to serve as Secretary of War. Democrat Obama has symmetrically chosen Republicans Robert Gates and Chuck Hagel to fill the same slot, now renamed the Secretary of Defense. Still, Lincoln’s signature executive accomplishments were at risk in a judiciary dominated by appointees of the opposite political party; the same remains true for Obama. Shortly after Lincoln’s death, every single congressional Democrat voted against the Fourteenth Amendment, which codified Lincoln’s dream of birthright equality of all citizens; almost never before had America seen such 100% polarization. In our era, every single congressional Republican likewise opposed Obama’s signature health care plan.

But even on the topics where his proposals were most radical, Lincoln’s opponents’ arguments have not aged well. Shortly before his death, he signed a proposed constitutional amendment providing for an end to American slavery—immediately and with no financial compensation to slaveholders. Nothing like this had ever happened in any American jurisdiction where slavery was widespread. In 1860, less than 1% of America’s black population voted on equal terms. In 1870, all racial disfranchisement was constitutionally forbidden, building on another suggestion made by Lincoln himself in his last public speech, just days before he died.

That level of equality had been a new public stance for Lincoln, a break from his more cautious early views, much as Obama has only recently evolved to a position of open embrace of same-sex marriage. If the Supreme Court later this year constitutionalizes this egalitarian vision, following the lead of the latest lanky lawyer from Illinois to occupy the Oval Office, the decision will likely trigger howls of protest. These howls are likely to be loudest in those regions that hated Lincoln and all that he stood for when he was still standing. But Lincoln’s example should remind us that contemporary controversy does not necessarily mean that the judgment of history will be equivocal. Lincoln’s vision of racial equality has been vindicated by posterity; and the same seems highly likely for Obama’ vision of sexual-orientation equality. As Mark Twain is said to have noted, history never repeats itself—but it sometimes rhymes.

Akhil Reed Amar is a professor of law at Yale and author of the newly released book, The Law of the Land: A Grand Tour of our Constitutional Republic. 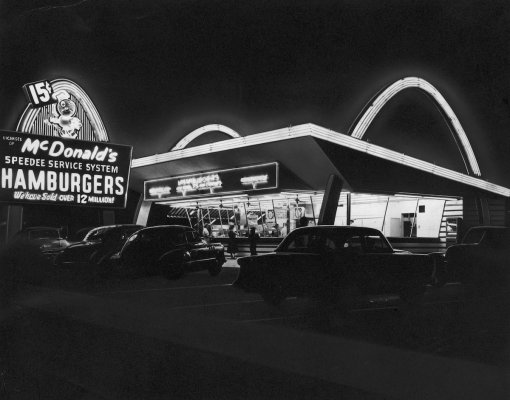 How a Late-Blooming Entrepreneur Made McDonald's the World’s Largest Burger Chain
Next Up: Editor's Pick