Malala Yousafzai holds a bouquet of flowers during after being announced as a recipient of the Nobel Peace Prize, on October 10, 2014 in Birmingham, England.
Christopher Furlong—Getty Images
By Dan Kedmey

Nobel laureate Malala Yousafzai wrote an open letter to the 219 Nigerian schoolgirls abducted by Boko Haram militants, one year after the girls were seized from a boarding school in the rural northeastern town of Chibok.

“On this first anniversary of your captivity, I write to you with a message of solidarity, love and hope,” the young Pakistani activist wrote in a letter posted to Medium, which she also read aloud in a SoundCloud audio recording.

Yousafzai described her own meetings with Nigerian officials, in which she urged Nigerian President Goodluck Jonathan to secure their release. “I am among many people pressuring them to make sure you are freed,” she wrote.

She also described emotional encounters with grieving parents and survivors of the attack. “Last July, I spent my 17th birthday in Nigeria with some of your parents and five of your classmates who escaped the kidnapping. Your parents are grief-stricken. They love you, and they miss you,” she wrote.

She added that girls who had escaped the attack received full scholarships through the Malala Fund to complete their secondary school studies. “We hope to someday extend that same scholarship to all 219 of you, when you return home,” Yousafzai wrote.

Read the full letter at Medium. 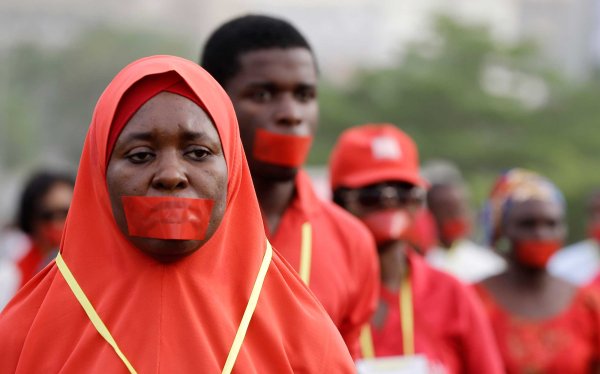 One Year On, Nigeria's Girls Are Still Missing
Next Up: Editor's Pick