5 Reasons You Should Update Your iPhone Immediately

A seller poses with iPhone 6 during a midnight sale of the new iPhone 6 and 6 Plus at Apple Premium Reseller store on October 24, 2014 in Prague, Czech Republic.
Matej Divizna—Getty Images
By John Patrick Pullen

Averaging more than an update per month, Apple’s iOS 8 is getting to be nearly as annoying as Adobe Flash when it comes to keeping software up-to-date. But at least users are getting something for their power-cycling and downtime. In fact, the newest iOS 8.3 update is loaded with some rather delightful goodies for iPhone and iPad users who keep their systems up to speed.

Here are five reasons why you should update your Apple iPhone or iPad’s operating system right now:

After updating their handsets, Apple users with newer-model cars (or whom have installed cutting edge, aftermarket car stereos) will get a pleasant surprise when they turn their key: CarPlay no longer requires that iPhones be plugged into a USB port to control your car radio.

Working like AirPlay does with Apple TV and wireless speakers, the CarPlay in-car user interface is now beamed directly from the phone to the car’s head unit, untethering phones and making this feature much more convenient. Now, if only Apple could do something about the price of CarPlay-compatible systems…

If you’ve noticed that Siri seems to have relaxed recently, it’s not you, it’s her. iOS 8.3 made some tweaks to the way Siri speaks, giving her a much more conversational tone, even if her words are the same. It’s a nice, subtle touch that you may not notice unless someone pointed it out to you. And it makes her corny jokes sound almost funny, too. (I said almost.)

But Siri’s isn’t the only voice to get some elocution lessons. The Maps app’s turn-by-turn navigation has improved its street name pronunciation as well.

Whenever there’s a big software update, it seems like there are always some users who get left out in the cold with strange, unexplainable bugs. With iOS 8, many users experienced intermittent Internet connectivity issues, including signal degradation and repeated requests for passwords. One tech-savvy user got so frustrated looking into the glitches that he outlined the problems online, coining the term WiFried.

Apple heard these complaints and, with this update, (hopefully) addressed an issue where devices intermittently disconnect from Wi-Fi networks, as well as nipped the continuous login issue. Speaking from personal experience, the password problem can be crazy-making, as you wonder if you’re always getting your Wi-Fi password wrong.

But the Wi-Fi update is not only about patches and band-aids. It also brings Wi-Fi Calling to Sprint customers, letting them join T-Mobile subscribers (and EE users in the U.K.), as the few who can talk on the phone without eating up their plan’s minutes. Hopefully other carriers will allow this feature in future updates.

Family Sharing is a feature that was released with iOS 8, and 8.3 helps to iron out some of its bumps. For instance, the update fixed a snafu where some apps wouldn’t launch on certain family members’ devices, but it would launch on others. Likewise, it also patched an issue that blocked some family iOS devices from downloading free apps already downloaded on another family-owned Apple gadget.

But in particular, parents will be happy to hear that the update made “Ask to Buy” notifications more reliable, letting account holders grant permission on App Store and iTunes purchases. iOS 8.3 also now lets parents set their kids’ phones to filter out iMessages from people who aren’t in their Contacts app — a great security feature to make sure strangers aren’t chatting with their kids.

And a big thumbs up to Apple for adding more than 300 new emojis to its iOS keyboard. The emoticons that have everyone all a-smiley-face in particular are the ethnically diverse icons that allowing people the world over to express themselves in ways that match how they look. And Apple’s designers didn’t stop with Earthlings — they even slipped in a secret Vulcan salute emoji. So, live long and prosper, iOS 8.3. At least until next month. 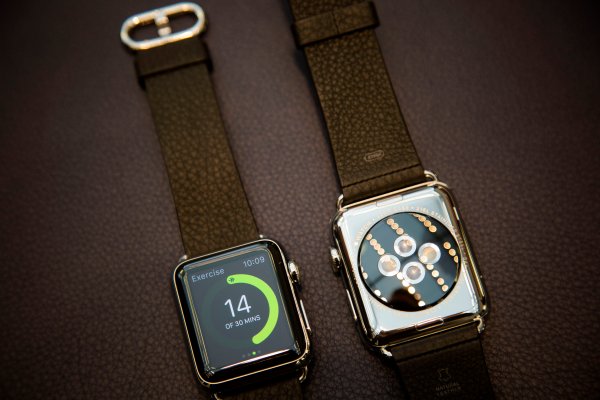 Am I Less Manly for Buying a Small Apple Watch?
Next Up: Editor's Pick