Americans have long been bewildered by the French paradox: that despite consuming a dream diet full of cheese, baguettes and red wine, people in France have generally low rates of coronary heart disease. By some estimates, the average French person eats 57 pounds of cheese each year—more than in any other country—while the average American eats a measly 34.

Scientists have yet to solve the puzzle. Some point to the resveratrol in red wine as one possibility; a more likely reason, say a growing number of experts, is that we were wrong—or at least partially wrong—to condemn saturated fat as a primary cause of heart disease. A small new study published in the Journal of Agricultural and Food Chemistry suggests yet another delicious possibility: cheese.

More research is needed, but in this paper—funded in part by Arla Foods (a Danish food company that produces dairy products) and the Danish Dairy Research Foundation—Danish scientists analyzed data from 15 healthy young men who ate three diets for two weeks. All of the diets had the same amount of calories and fat, but one was rich in 1.5% fat milk, another required eating 1.7 grams of cow cheese per day, and there was a third control diet. The researchers analyzed the men’s urine and feces to figure out how dairy is metabolized and what effect it had on markers of blood cholesterol levels.

When people gorged on dairy products—but especially cheese—their microflora seemed to change. In their feces, researchers saw some metabolites that they know are related to the metabolism of the microflora: short-chain fatty acids like butyrate and propionate both appeared at increased concentrations compared to the control diet. They also had lower levels than the control group of TMAO, a metabolite produced when the body metabolizes choline, which is found in many animal-derived foods, especially red meat. (Lower levels seem to be a good thing; other research has shown that TMAO may help transport cholesterol to the arteries and predicts mortality rates.)

The findings suggest that cheese and milk might help modify the gut bacteria to decrease production of TMAO, the authors write. “I was surprised,” says study co-author Morten Rahr Clausen, a postdoc in the department of food science at Aarhus University in Denmark. “I didn’t expect to find anything in the cheese that would change the microflora.”

MORE Should I Eat Cheese?

The researchers can’t be sure whether the increase in gut-friendly compounds came directly from the cheese or if they were formed by the microbiota, Clausen adds—but they could still have a beneficial effect either way. “I’m not completely sure why, but it seems like the cheese and also milk, but mainly cheese, affects the microbiota after eating cheese and that might affect the composition of the lipids in the blood,” he says.

The study adds a new dimension to our understanding how fermented milk products interact with the body. “The previous mechanism was that calcium binds the fatty acids and they’re just flushed through the gut,” he says. “Our study suggests another mechanism that the cheese might work through.”

More research and studies on bigger, more diverse populations are needed before we definitively solve the French paradox, but these results are promising. “We didn’t know beforehand what to look for,” Clausen says. “Sometimes you find something that you didn’t expect.”

Read next: People Who Love Grilled Cheese Sandwiches Have Way More Sex Than Those Who Don’t 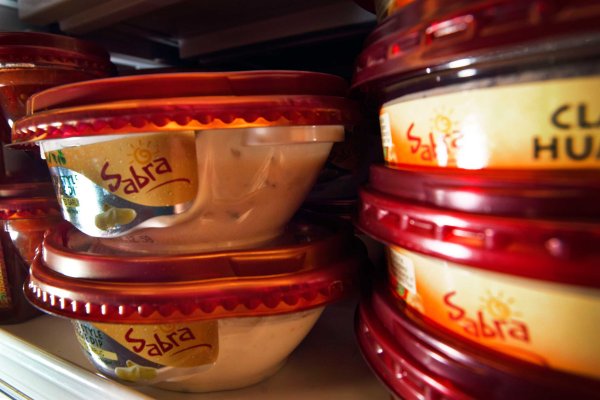 Hummus and 5 Other Foods You Shouldn't Eat This Week
Next Up: Editor's Pick