How I Met My Mother: Don Draper's Oedipal Farewell Tour

“You think you’re going to begin your life over and get it right. But what if you never get past the beginning?”

Is Diana the waitress real?

Yes. Maybe! Probably. OK, yes–in the literal terms of how she’s presented on Mad Men, Diana appears to be an actual, in-the-flesh person, not a ghost, hallucination or Greek hunter-goddess. When we and Don first meet her, it’s in the company of other people, including Roger Sterling, who tips her the $100 she mistakes as an advance payment for sex. (As one does.) And in “New Business”–largely dedicated to the old business of Don’s love life–when Sylvia awkwardly encounters Don in his building’s elevator, she acknowledges his date.

But Diana is just barely real, in a way that seems too blatant to be accidental. While I don’t think Matthew Weiner is planning some kind of Sixth Sense shocker twist here, there is something Sideways Universe about her entire relationship with Don. For the most part, her scenes with him are written and staged precisely as you would if she were going to be revealed as a phantasm or a dream.

They’re generally alone, or in the presence of other people (restaurant workers, strangers) who take no note of them. They immediately fall into deep, revealing conversations about death, loss and the slipperiness of reality. (Think carefully about when you had that dream–when people die, everything gets mixed up.) She seems archetypal, more symbol than person, and she’s rootless, with no other connections–not even a telephone–or people around her. He meets her waitressing at one restaurant, then finds her–with the odd visual logic of a dream–waitressing in another restaurant, as if she is all waitresses, the Ur-Waitress.

It all fits into a real-world story, of course. (Diana has moved to New York after her daughter’s death precisely to be where she knows no one and has no connections, for instance.) But it plays out more or less the same as it would if she existed only in Don Draper’s head.

Which she does, even if she’s as real as you and I. Remember why Don goes back to her: he feels like he knows her from somewhere, she reminds him from someone, in a way that unsettles him. Elizabeth Reaser’s casting is perfect here, because she has the same effect on a Mad Men audience: she’s a familiar face, but just somewhat, and looks a little like so many of Don’s Dusky Sad Women past, from Midge to Rachel to Suzanne Farrell to Sylvia.

Oh, and one more: Don’s mother, Evangeline (make of that name what you will), the prostitute who died when he was born. A person Don can never have seen, except that he has, in the season 3 premiere “Out of Town.” Don is warming up milk for his expectant wife Betty, and while that big bubbling pot of symbolism froths on the stovetop, Don imagines the primal scene between his mother and Archie Whitman, his own birth, and the ironic naming of Dick Whitman. (“You get me in trouble, I’m gonna cut your dick off and boil it in hog fat.”) As Evangeline shivers near death, she’s asked if she wants to hold her baby. At least in Don’s vision, she never does.

You don’t have to be Dr. Freud, or Dr. Faye Miller, to see that Don in some way has all his life been trying to get into her arms, to get back to his own phantasmal, real-but-not-real mother. At the outset of season 4, after his divorce from Betty, we find him in bed with a prostitute, paying her to slap him. (That encounter is further complicated in season 6, when we learn that Dick Whitman lost his virginity as a boy to a prostitute who molested him.) Not coincidence, I’m guessing, that Don becomes fixated on Diana after she has sex with him for money (even if he wasn’t aware of it at the time).

Mad Men is about nothing if not pattern-following, and this echoes plenty of patterns in Don’s past relationships: women who often echo Evangeline’s appearance, women in whom he sees something maternal. (When Don chooses Megan over Faye, for instance, one thing that appears to seal the deal is how quickly she bonds with his kids, mopping up spilled milkshakes and making everything right again.)

And it’s starting to look as if the final stretch of Mad Men may be taking stock of Don’s life by taking a farewell tour of each of Don’s relationships: we saw Rachel in “Severance,” Megan, Sylvia and Betty this week. The final episodes are driving forward to the future and the end; Don is trying to turn a corner with Megan, cutting her a check for a million dollars. But as Pete says to Don, there’s no guarantee you can ever make it past your beginning.

Don may see his mother in Diana, and shades of each woman he’s known since. But there’s one more nagging familiarity: he sees himself. She fled from the Midwest–Racine, Wisconsin–to New York. (Don was raised in Pennsylvania but was born in Illinois.) She left behind blood and kin after a trauma, and lives with the guilt of it, while escaping into alcohol and hookups. At one point, she even overtly echoes Don’s famous Carousel pitch from “The Wheel,” saying that she feels “a twinge in my chest.” (“In Greek,” as Don put it, “‘nostalgia’ literally means ‘the pain from an old wound.’ It’s a twinge in your heart far more powerful than memory alone.”)

But there’s a big difference between Diana and Don. Where he left his old life and diligently built a new one–name, home, career–she repudiates that idea as an evasion, a betrayal. She’s come to New York specifically to have nothing and no one, to have no identity at all, to live with her pain and dedicate herself to it. To Don, they each offer the other the chance at healing. To Diana, that’s exactly the danger–he makes her forget, and she never wants to. The last thing she wants is to Don Draper her own existence.

I’m still debating whether Diana really works as a character rather than as a thematic device; she’s still too ethereal and thin to seem more than an externalization of Don’s issues, a dream girl, a Renaissance painting, a Madonna with Coffee Carafe. And maybe things will end the way they have for so many of Don’s women, with him turning the relationship into what he needs it to be. Maybe that pattern will repeat too. (In general, though, judging a Mad Men season two episodes in is tempting fate.)

But one thing at least is different here. Even as Don again finds his mother in a woman, this time he’s also found an alternative, alliterative version of himself. (“Diana”–goddess of childbirth as well as hunting, if you’re keeping score–is practically “Donna,” which would have been a little on the nose.) But this version of himself argues that his whole ambition of remaking himself and starting again is a delusion.

Diana may be Don’s last relationship on Mad Men. She may turn out to be his best or his worst or neither. But with her parallels to both Dick Whitman and his mother, she’s at least a fitting return to the very beginning. However real Diana ultimately is, she’s a fitting last partner to Don/Dick, a man for whom nostalgia is the pain from an old womb. 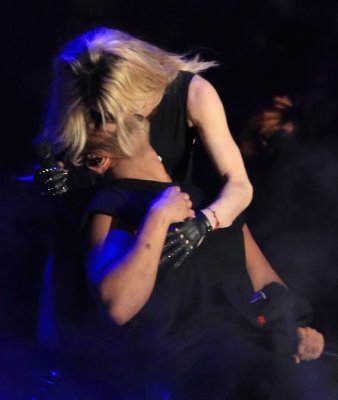 Watch Madonna Make Out With Drake at Coachella
Next Up: Editor's Pick