GoPro’s community of thrill seekers might have been upstaged permanently by a NASA astronaut who captured stunning footage of a spacewalk using a high definition camera for the very first time.

NASA astronaut Terry Virts strapped on the point-of-view camera last February before venturing out of the International Space Station (ISS) to do some exterior housekeeping on the berthing docks. He and astronaut Barry Wilmore were reconfiguring the ports for the upcoming arrival of commercial crews.

Along the way, they captured two stunning videos, one showing the ISS’ incomparable views of earth and the other floating beneath the station’s underbelly, bristling with panels, cables and dishes.

“This was the first time an astronaut captured HD video of a spacewalk while outside,” NASA public affairs officer Dan Huot told TIME. The GoPro helmet camera used features much higher resolution than the astronauts’ current helmet-cams. “They are small, simple and have great quality,” he said.

The camera used during the space-walk works much like the kind of GoPro you can buy here on Earth, only with a one-touch power up and record function. “This makes it much easier to execute while wearing large gloves,” Huot added.

The footage is quieter and slower than the typical GoPro images of say, roof jumpers or a great white shark lunging toward the camera. But then it’s hard to top the hypnotic movement of a camera in zero gravity, where even a belt buckle, floating into the frame, can be fascinating to watch.

“Video like this is the whole reason we built the camera,” Rick Loughery, a spokesperson for GoPro, said. “To be able to share that perspective with the world.”

Read next: A Year in Space 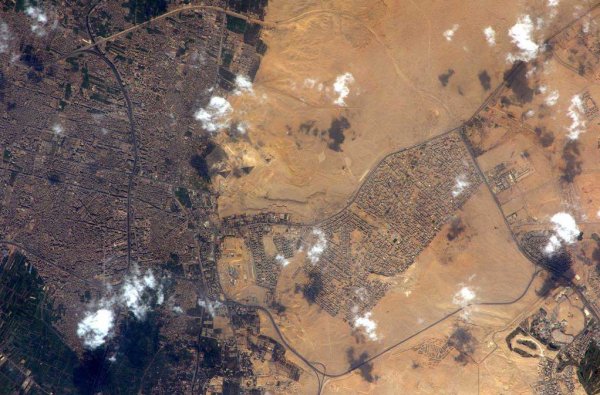 See Egypt's Pyramids From Space
Next Up: Editor's Pick