Islamic Feminist: Duke Students Tried To Cancel My Speech. That Made It Even More Important.

Asra Nomani during an interview in New York on April 6, 2005.
Mike Segar—Reuters
Ideas
By Asra Nomani
Asra Nomani is the author of “Standing Alone: An American Woman’s Struggle for the Soul of Islam.”

This past week, University of Michigan students watched American Sniper after the university first cancelled the film’s showing amid protests from an Arab-American Muslim student that the film offended her. The episode at Michigan was like my own painful experience at Duke University after a Muslim student group recently blackballed me.

Tuesday night, while Islamic State fighters gained new ground in Syria, I walked onto a stage at Duke University to argue for a progressive, feminist interpretation of Islam in the world. Staring into stage lights, I counted the number of people looking back at me: nine, not including my parents and son.

“I would have come here to speak to just one person. To me, it is simply a victory to stand before you,” I said.

Five days earlier, the Duke University Center Activities and Events had cancelled my talk after the president of the Duke chapter of the Muslim Students Association sent an email to Muslim students about my “views” and me, alleging that I have a nefarious “alliance” with “Islamophobic speakers” and noting that a Duke professor of Islam, Omid Safi, had “condemned” me. After I asked for evidence against me, the Center for Activities and Events re-invited me. A spokesman for Duke said the university regrets the misunderstanding.

This experience goes beyond feminism to a broader debate over how too many Muslims are responding to critical conversations on Islam with snubs, boycotts, and calls for censorship, exploiting feelings of conflict avoidance and political correctness to stifle debate. As a journalist for 30 years, I believe we must stand up for America’s principles of free speech and have critical conversations, especially if they make people feel uncomfortable.

By standing on stage, I was standing up to the forces in our Muslim communities that are increasingly using tactics of intimidation and smears such as “Islamophobe,” “House Muslim,” “Uncle Tom,” “native informant,” “racist” and “bigot” to cancel events with which they disagree.

These dynamics of silencing are often used against women such as Ayaan Hirsi Ali, a Somali-born activist and author of a new book, Heretic. Brandeis University uninvited her from speaking after protests from the Council on American-Islamic Relations and the Muslim Students Association last year, and the Muslim Students Association at Yale University protested her speech at the university last fall.

Friday, organizers of a conference on women and gender at the University of South Dakota defied pitched protests to screen a documentary, Honor Diaries, about crimes Muslim women face, in the name of “honor.” The controversy has been “very upsetting,” writes Miglena Sternadori and Cindy Struckman-Johnson, the event organizers, and the controversy underscores the battle over whose voices are “authentic,” they say.

Last April, Honor Diaries wasn’t as fortunate as American Sniper at the University of Michigan when administrators there cancelled a screening after protests from the Muslim Students Association and the Council on American-Islamic Relations. The protesters used a social media hashtag campaign #DishonorDiaries to discredit the film. The University of Illinois also cancelled an Honor Diaries screening after protests from the same Muslim groups. Zainab Zeb Khan, a dynamic Afghan-American activist interviewed in the film, says, “It was a nightmare.” She organized a successful substitute screening at a downtown Chicago theater to allow for dialogue and advocacy. “They are using the same tactics of shame and intimidation used to silence people in our traditional cultures. We can’t allow it,” she says.

Slurs have also been used by Muslims against Egyptian-American journalist Mona Eltahawy, author of a new feminist manifesto, Headscarves and Hymens; Syrian-American physician and activist Zuhdi Jasser; Iranian-American writer Melody Moezzi, and many other writers and activists, in an attempt to discredit them inside our communities. “We don’t all need to share the same opinions in order to share the conviction that open debates and discussions within our communities are necessary and should be fostered,” Moezzi says.

In a statement provided to TIME, a Duke University spokesperson said, “Duke is strongly committed to free expression and open discussion of controversial issues…We regret that there was a misunderstanding among our students and staff that made it seem like Ms. Nomani was no longer invited to speak at Duke. Once we became aware of it, Duke immediately let Ms. Nomani know that she was welcomed to speak with our students and the larger community, which she did.”

As I stood on the stage at Duke, just a wireless microphone tucked into my pink kurta, no barrier between the audience and me, I looked out past the stage lights and said: “There are many who want to make us invisible. But I am standing here today because I believe that, if we try, we can be invincible.” There are only two letters separating the two words, I told the audience: “nc,” the abbreviation for North Carolina, and it was appropriate that, there, in that state, I was rejecting invisibility and standing up for invincibility. An Indian-American Sikh feminist smiled and nodded her head in agreement. 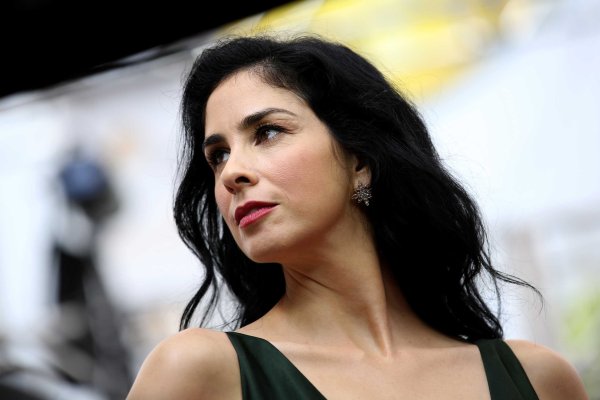 Watch Sarah Silverman Get Serious About Equal Pay
Next Up: Editor's Pick