Kansas Man Arrested for Plotting Attack on Army Base, Pledging Loyalty to ISIS

A Kansas man was arrested Friday for planning to detonate a bomb at a U.S. army base and pledging loyalty to the militant group Islamic State of Iraq and Greater Syria (ISIS), prosecutors said, the latest of several ISIS-related arrests on American soil.

John T. Booker, a 20-year old U.S. Citizen from Topeka, was planning a suicide attack on the Fort Riley army base in Kansas in an attempt to support ISIS, authorities said. A criminal complaint alleges that Booker, who also goes by the name Mohammed Abdullah Hassan, posted to Facebook “I will soon be leaving you forever so goodbye! I’m going to wage jihad and hopes that i die” and “Getting ready to be killed in jihad is HUGE adrenaline rush!! I am so nervous. NOT because I’m scared to die but I am eager to meet my lord.”

When the FBI questioned Booker about his Facebook posts, he said he enlisted in the U.S. Army with the intent to commit an insider attack like Major Nidal Hassan did at Fort Hood in Texas, according to prosecutors. He said if his army officer ever told him to kill a fellow Muslim, he would kill the officer instead.

After waiving his Miranda rights, Booker also told the agents that he intended to target high-ranking army officials, but that he didn’t envision using a machine gun—he was more interested in an attack with a small gun or sword. This led to Booker being denied entry into the military, but he was not immediately arrested.

Throughout his plan to attack Fort Riley, Booker was accompanied by two undercover FBI agents who he believed were helping him. Booker rented two storage units where he kept materials and explosives for a car bomb, and planned for the accomplices to build the bomb, prosecutors said. The plan was for Booker and one of the accomplices to bring the bomb to Fort Riley and for Booker to detonate it himself, since he wanted to be the one to flip the switch, prosecutors said.

Booker also asked the undercover officers to take care of his debts so he could enter paradise as a martyr after his death. In one of the videos he made about his plan, he said:

“Today, Inshallah, we are going to build this bomb with 1,000 pounds of Ammonium Nitrate… This message is to you, America. You sit in your homes and you think that this war is just over in Iraq… we will bring the Islamic State straight to your doorstep. You think this is just a game… when this bomb blows up and kills as many kuffar [non-Muslims] as possible, maybe then you’ll realize it.

Booker was arrested by FBI agents Friday, as he drove in to Fort Riley to carry out the attack. As he was making preparations to detonate the device, he was taken into custody. He is facing federal charges for attempting to use a weapon of mass destruction against U.S. property. Booker, who is being represented by the Federal Public Defender’s office, will plead not guilty. 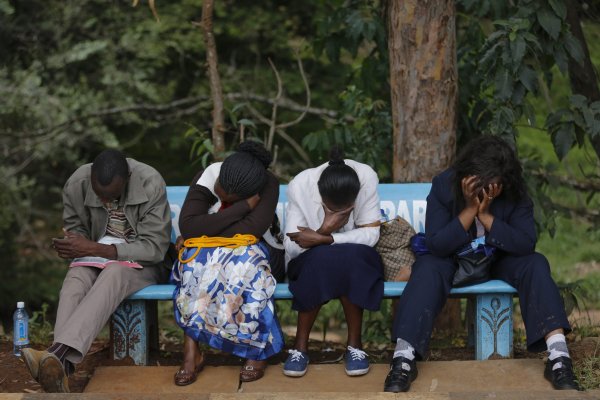 These 5 Facts Explain Terrorism in Kenya
Next Up: Editor's Pick