Welcome to All About Eve, transported by writer-director Olivier Assayas to the Swiss Alps. In Joseph Mankiewicz’s Oscar-winner from 1950, Bette Davis was the aging actress, Anne Baxter the ingenue eager to steal her idol’s star luster. In Assayas’ intimate, occasionally poignant Clouds of Sils Maria, Maria Enders (Juliette Binoche) is the modern Bette Davis. She’s a middle-aged actress who won renown at 18 as the scheming young Sigrid in the play Maloja Snake, and who is now asked to take the role of Helena, the older victim, in that play’s revival. Sigrid is to be played by Jo Ann Ellis (Chloë Grace Moretz), a teen sensation with a scandalous rep. To prepare for a part that forces her to acknowledge her vanished youth, Maria rehearses with her assistant Val (Kristen Stewart).

Which young woman is Eve? Both Val and Jo Ann carry themselves with a precocious poise that, in Maria, has curdled into self-doubt. She knows that stars shine brightest when they are new. In truth, neither of the younger women wants to be Maria. Jo Ann is perfectly content being smarter than the reckless kid she plays on TMZ and the police blotter. Val, who for a few years has been Maria’s trouble-shooter, chief critic and best friend, is ready to move on, to a real life beyond the make-believe world that Maria lives in.

Eve Harrington schemed to wrest the crown of Great Actress from Margo Channing. But that was a different era. These days, does any ambitious young woman yearn to be 50—even a famous, revered 50? It becomes clear that Maria’s true Eve is her younger self, the actress of allure and promise that she has grown out of as she grew older. That lustrous creature taunts Maria in old movie clips; her mirror offers conclusive evidence not of maturity and wisdom but of decay from the Alpine peak of her youth.

Binoche turned 50 two months before the movie’s debut at the 2014 Cannes Film Festival. She made her first strong impression 30 years ago in Jean-Luc Godard’s Hail Mary, graduated to international stardom opposite Daniel Day-Lewis in The Unbearable Lightness of Being and earned an Oscar as the nurse tending to Ralph Fiennes in The English Patient. Like her Maria character, Binoche has concentrated on European films while gracing the occasional Hollywood movie (Dan in Real Life with Steve Carell). She also appeared briefly in last year’s Godzilla remake, which gets a joking reference in Maria’s complaint that “I’m sick of hanging from wires in front of green screens.”

In Maps to the Stars, another Cannes entry last year, the actress played by Julianne Moore faced a challenge similar to Maria’s: hoping to be cast in a movie role once made famous by her dead mother. Maria, who has been cast in a role that haunts her, outfits herself in the shroud of an aging actress—the delicate crow lines and slightly thickening waist that Binoche wears as badges of long, meritorious movie service. Last appearing for Assayas seven years ago in the lovely Summer Hours, an international art-house hit, she is still a beauty, still a subtle, compelling performer. Any middle-aged woman might wish to be Juliette Binoche.

The film’s title refers to the formation of clouds that move in a serpentine fashion through low-lying mountains in the town of Sils Maria in the Swiss district of Maloja. Hence the “maloja snake,” which is also the name of Maria’s signature play. The action of the film, though, is less meteorological than psychological: an essay on the burden of aging in public, and an implicit conversation that Maria has with her younger, rival selves as personified by Val and Jo Ann.

Moretz, the bright child star now segueing into adult roles, has just a few scenes to prove that Jo Ann is wiser than her tabloid escapades would indicate. Stewart, who like Maria came to stardom at 18 (in the first Twilight movie), has the gift of revealing without displaying. Here, as in Still Alice, where she played Moore’s daughter, she seems always to be appraising Maria, and Binoche, searching for flaws and perhaps inspiration. Val marks her most complex film role to date, for which Stewart, who turns 25 today, earned a César for Best Supporting Actress. She is the first American actress to win the French Oscar.

Binoche, nominated for Best Actress, did not win a César. So maybe, in awards recognition if not in Assayas’ movie, Kristen Stewart is the real Eve Harrington. 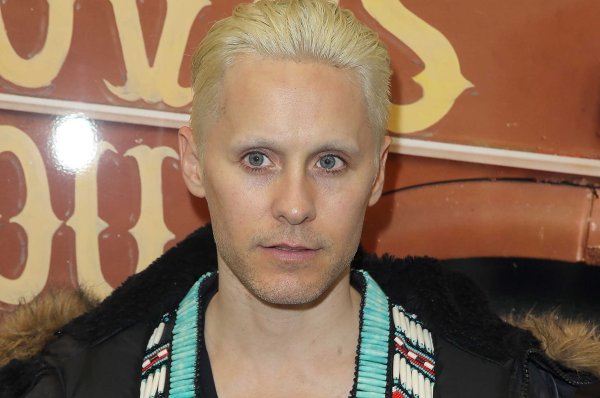 Here's Your First Look at Jared Leto as The Joker in the Upcoming Suicide Squad
Next Up: Editor's Pick