Iran’s Supreme Leader Ayatullah Khamenei warned Iranian diplomats on Thursday not to trust the United States as they try to finalize the nuclear agreement that was reached in Lausanne, Switzerland last week.

In his first speech since the agreement, Khamenei said: “I have told the officials to not trust the opposing side, to not be fooled by their smiles, to not trust their promises because when they have achieved their objectives they will laugh at you…. After every round of talks they make public comments that they then tell us in private was meant to save face in their own country and to counter their opponents, but this is their own problem and has nothing to do with us.”

Khamenei said that he would support an agreement that “upholds the interests and honor of the [Iranian] nation,” but would prefer no deal to one that endangers those interests. Stressing his belief that the U.S. cannot be trusted, he said he had serious concerns. “Everything is in the details. It is possible that the deceitful opposing side might try to restrain our nation in the details,” he said.

Iran and the U.S., Russia, China, U.K, France and Germany agreed on a framework deal last Thursday although Khamenei singled out the U.S. in his comments. The deal is supposed to limit Iran’s ability to make a nuclear bomb but allow it to develop nuclear energy. In return, Iran will be allowed to access bank accounts, oil markets and financial assets that have been closed to it by international sanctions.

The deal says that sanctions will be lifted once international monitors have verified that Iran is abiding by its commitments under the deal.

Khamenei’s comments came the same day as President Hassan Rouhani demanded that all sanctions on Iran be lifted immediately when the deal is concluded. “We will not sign any agreement, unless all economic sanctions are totally lifted on the first day of the implementation of the deal,” he said.

The Ayatullah insisted that international inspectors would not be allowed to enter military areas nor would Iran be subject to any regime that was not applicable to other countries. He also warned that the three-month timetable could be extended. “They might say that we only have three months to reach a deal, well if three months becomes four months the sky won’t come falling down,” he said.

Though many Iranian officials, from the President to the head of the Revolution Guard have issued messages in support of the Lausanne agreement, Khamenei insisted no binding agreement has been reached, “What’s been done until now neither guarantees an agreement, nor that talks will even reach a conclusion,” he said.

While some observers had hailed the Lausanne talks as an opening between Iran and the U.S., Khamenei said: “All should know that we have nothing to negotiate with America on regional and international issues. However the nuclear negotiations will be an experience. If the other side refrains from its usual improper actions this will become an experience that we can negotiate on other issues, but if we see that once again they act improperly, our distrust of America will be only strengthened.”

Khamenei also singled out Saudi Arabia for criticism for its attacks in Yemen. “We have always had numerous differences with Saudi Arabia but until recently they always acted with dignity in foreign policy. Now a few inexperienced youth have taken over the affairs of the state and are replacing dignity with barbarity,” he said.

This week Iran sent warships to support Houthi rebels in Yemen who Saudi Arabia has been bombing. “But I warn them that this behavior will not be tolerated in the region and they must cease their crimes in Yemen. The Saudis have created a dangerous precedent in the region, they will be harmed and incur losses in this issue in which they will under no circumstances triumph. The Saudis’ face will be rubbed in the ground in Yemen,” Khamenei said. 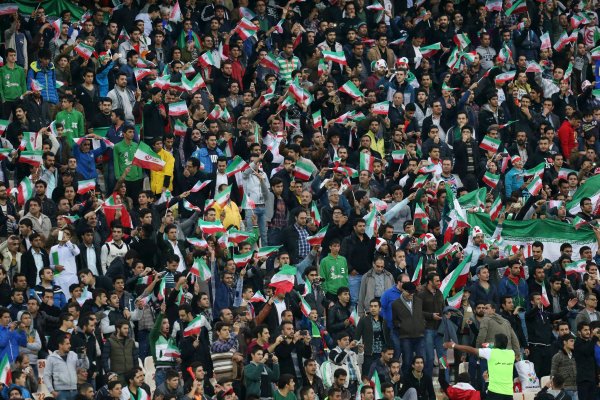 Iran Will Allow Women to Attend Major Sporting Events
Next Up: Editor's Pick