Inside the Village Caught in the Crossfire Between Israel, Syria and Lebanon

Smoke rises next to the village of Ghajar on the Israeli-Lebanese border, as a result of the fire exchange between the Israeli and Hizballah militant group on Jan. 28, 2015.
Atef Safadi—EPA
By Inna Lazaerva/Ghajar

When loud explosions rocked the small hilltop village of Ghajar — partly located in the Israeli-occupied Golan Heights — a few months ago, a sense of terror that a long dreaded conflict had finally arrived rippled through the local residents.

As the locals dove to the ground, five anti-tank missiles whizzed past their windows aimed at IDF (Israeli Defence Force) vehicles on a road two miles away. Two Israeli soldiers were killed on the spot. The sixth missile, which had possibly gone astray, struck a house in Ghajar, piercing through the roof and setting it on fire.

“Amazingly, there was no one inside — the mother and two children left only 10 minutes previously”, says Najib Khatib, Ghajar’s spokesman, shaking his head.

The incident may seem a freak event in this picturesque community of 2,450 people, with pastel-hued houses and friendly residents who, when asked for directions, unhesitatingly wave you inside their living rooms for coffee and cakes.

But the tidy homes are pock-marked by bullets — testament to the many times the community has found itself caught in the fighting between Israel, Syria and Lebanon. Ghajar is Israel’s only Alawite village. Residents vote for Israeli politicians and also support President Bashar al-Assad. They also fear a new war between Israel and Hizballah, the Lebanese Shiite militia.

The name ‘Ghajar’ means ‘Gypsy’ in Arabic and holds more than a grain of truth in describing the tri-border existence of its residents, in a region where nationalist identities have been as fluid as the village’s borders.

In 1967, Israel conquered the Golan Heights from Syria and those Ghajar residents who remained later chose to accept Israeli citizenship when the territory was annexed in 1981. In 1982, when Israel occupied southern Lebanon, the village expanded into Lebanese territory. When Israel pulled out of southern Lebanon in 2000, the residents in northern Ghajar suddenly found themselves living in Lebanon, whilst their relatives and neighbours who previously lived just across the street now lived in a separate country — and an enemy state.

“You know, when I was a child at school, I simply couldn’t believe that the Earth was spinning around like a ball”, Najib Khatib explains, standing a few metres beyond the United Nations Blue Line which in theory separates the Israeli side of the village from the Lebanese.

“But later, I realised that the proof was beneath my feet: once this [village] was Syria, then Israel and now they say it’s Lebanon!”

The division of the village — one half in Israel, the other in Lebanon — lasted until 2006 when Israel invaded north Ghajar during the Second Lebanon War.

Earlier, in November 2005, Hezbollah launched an assault on the village, firing mortars and Katyusha rockets on IDF positions and civilian houses. Nine months later, an all-out war erupted, triggered by a cross-border kidnapping of two Israeli soldiers not far from Ghajar. The second Lebanon war resulted in the deaths of over 1,400 Lebanese and 163 Israelis.

The U.N.-brokered truce which ended the war did not prevent Hizballah from re-arming and continuing to threaten Israel.

“We have weapons that can bring us a victory against any type of Israeli aggression”, boasted Hizballah leader Hassan Nasrallah in a recent televised address.

When asked about the threat of war, Samira, a sharp-witted housewife in her 30s who has lived in the village all her life, appears relaxed. “We are used to it. Every year, year and a half, they make us a little ‘party’ ”, she says, referring to the clashes between Israel and Hizballah that have been going on for decades.

In January 2015, Israel attacked a joint Hizballah-Iranian military convoy on the Syrian side of the Golan Heights, killing an Iranian commander and six Hizballah operatives. When Hizballah retaliated, Ghajar found itself, once again, at the centre of the action.

“In January, there was a loud explosion and lots of smoke”, Samira says. “What did we do? We lay on the floor and we cried”.

Hizballah has also been taking part in the war in Syria, committing as much as a quarter of its fighting force to battles raging across the Lebanese border.

Ghajar residents also worry about the possible spillover of the conflict in Syria, with the border located only a few miles away.

The Alawites are a Shiite sect that includes the Assad clan and its supporters. The civil war pits Assad against mostly Sunni rebels. The villagers are terrified that, if the rebels succeed in taking over the Israel-Syria border, Ghajar will be the next target.

“I’m really afraid of them. I’ve been hearing the stories about them. They’re awful, they’re animals”, Mohammad, a local dentist says of the rebels. “Even animals do not do what they do.” “[…] They don’t stop, they just carry on murdering people.”

As such, in Ghajar support for Assad remains strong among many of the residents. “President Assad is doing what the terrorists are deserving”, Mohammad says. “If a guy walks into your home and tries to terrorise your family, what would you do?”

But while the residents of Ghajar have endured wars and terrorism, their concern is the future of the village. The U.N. and Beirut insist that the northern half of the village will be given back to Lebanon, despite the fact that the Blue Line border runs directly through Ghajar’s centre and several nearby houses. In 2010, the Israeli cabinet came close to an agreement to withdraw but the matter remains to be settled

The residents are opposed to the division. “We are not Lebanese, we don’t have any links to Lebanon”, says Khatib. If the village was transferred into Lebanon’s hands, the locals, he says, would become “refugees”.

For years, Khatib and others have been holding protests and demonstrations against any change to the village boundaries. Khatib says he has lobbied everyone from former U.N. Secretary General Kofi Annan to successive Israeli Prime Ministers on this, delivering “stacks of plans , maps and building permits all to show that Ghajar is not Lebanese”. So far, little has changed. 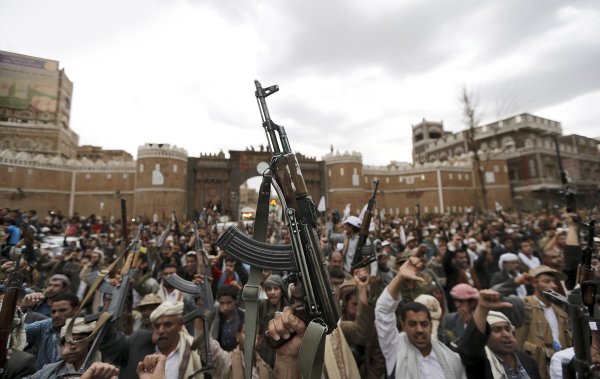 Caught in the Cross Fire
Next Up: Editor's Pick