From Trayvon Martin to Walter Scott: Cases in the Spotlight

Neighborhood watch volunteer George Zimmerman fatally shoots unarmed 17-year-old Trayvon Martin after an altercation in a Sanford, Fla., subdivision. The incident sparked a national conversation about race and prompted President Obama to say that were he to have a son, “he’d look like Trayvon.” Zimmerman, who argued that he acted in self-defense, was acquitted of second-degree murder and manslaughter in July 2013.

Ernest Satterwhite, 68, is shot and killed in his driveway by a white public-safety officer in North Augusta, S.C., following a slow-speed car chase. Justin Craven fired multiple rounds through the driver-side door of the vehicle. The officer alleges that Satterwhite reached for his weapon; Satterwhite’s family disputes the allegation. Craven was charged with a felony for discharging his gun into an occupied vehicle on April 7, the same day Michael Slager was charged with murdering Walter Scott. He faces up to 10 years in prison.

Milwaukee police officer Christopher Manney fatally shoots Dontre Hamilton, an unarmed 31-year-old African American with a history of mental illness, in a downtown park. Manney alleged that Hamilton, who appeared to be homeless, attempted to grab his baton during a pat down. Manney says he shot Hamilton 14 times in self-defense. Manney was fired in October but was not charged in the shooting.

Eric Garner, 43, dies after being wrestled to the ground as New York City police attempted to arrest him for selling illegal cigarettes. In a cell-phone video recorded by a bystander, Garner can be heard repeatedly saying, “I can’t breathe.” The phrase was soon adopted as a rallying cry by protesters. On Dec. 3, a grand jury decided not to indict NYPD officer Daniel Pantaleo in Garner’s death.

John Crawford III, 22, is shot inside a Walmart in Beavercreek, Ohio, after picking up an air rifle from the shelf. While police say they repeatedly asked Crawford, who was black, to drop the gun, surveillance video shows that police shot the man soon after approaching him.

Darren Wilson, a white Ferguson, Mo., police officer, fatally shoots unarmed 18-year-old Michael Brown, setting off months of unrest in the St. Louis area. Protests erupted nationwide in November, when Wilson was not indicted in Brown’s death. But the shooting prompted a Justice Department investigation of the Ferguson Police Department. In March, after the scathing report found instances of overt racism among officers and a pattern of arrests targeting black residents, Ferguson’s police chief and city manager resigned.

Levar Jones, 35, is shot multiple times by 31-year-old Sean Groubert, a white South Carolina state trooper, seconds after being stopped for a seat-belt violation, all of which was caught on the officer’s dash cam. Jones, who was black and unarmed, survived and can be heard on a video asking, “Why did you shoot me?” Groubert was later fired and charged with assault and battery, which carries a sentence of 20 years in prison. A verdict is expected later this year.

Tamir Rice, 12, is fatally shot and killed in a Cleveland park after police responded to a 911 call reporting a person with a gun. The caller warned that the gun may have been fake, but the officers say they didn’t know that. Officer Timothy Loehmann shot Rice within seconds of arriving on the scene. Rice’s gun turned out to have been a toy. A group of political and religious leaders have called for criminal charges to be brought against the officers involved, and a grand jury plans to hear evidence in the case.

Rumain Brisbon, 34, is shot and killed by a Phoenix police officer following a drug-related traffic stop in which Brisbon, who was black, fled, refused arrest and appeared to be reaching for a weapon. Brisbon was shot by Mark Rine, a 30-year-old white officer. The incident set off several demonstrations in downtown Phoenix. On April 1, a Maricopa County attorney announced that criminal charges would not be brought against Rine.

Los Angeles police officers shoot and kill a black homeless man named Charly “Africa” Leundeu Keunang, following a confrontation in the city’s Skid Row, an area with a heavy concentration of homeless people. Officers said the man attempted to take one of their guns.

Naeschylus Vinzant, a 37-year-old unarmed black man, is shot in the chest and killed by Paul Jerothe, a police officer in Aurora, Colo. At the time of the shooting, Vinzant was violating his parole and had removed his ankle bracelet. He also had a violent criminal history but was unarmed as officers tried to arrest him. Jerothe, a SWAT team medic officer, has been placed on administrative leave pending an investigation.

Tony Robinson, a 19-year-old biracial man, is shot by a white Madison, Wis., police officer after Robinson was allegedly jumping in and out of traffic. Matt Kenny, a 45-year-old officer who was exonerated in a 2007 shooting of an African-American man, got into an altercation with Robinson when he entered an apartment in which Robinson was reportedly acting aggressively. Kenny, who says he was attacked by Robinson, was placed on administrative leave with pay pending the results of an investigation.

Anthony Hill, a black 27-year-old Air Force veteran, is shot and killed in Chamblee, Ga., by Robert Olsen, a white DeKalb County Police Department officer. Hill was naked and unarmed at the time of the incident and was apparently knocking on multiple apartment doors inside a housing complex. Olsen has been placed on leave. An investigation by the Georgia Bureau of Investigation is currently under way.

Walter Scott, a 50-year-old black man, is shot and killed as he’s apparently fleeing North Charleston officer Michael Slager, 33. Slager, who is white, alleges that Scott reached for his Taser. A video recorded by a bystander appears to show Scott running away from the officer as he’s shot in the back eight times. 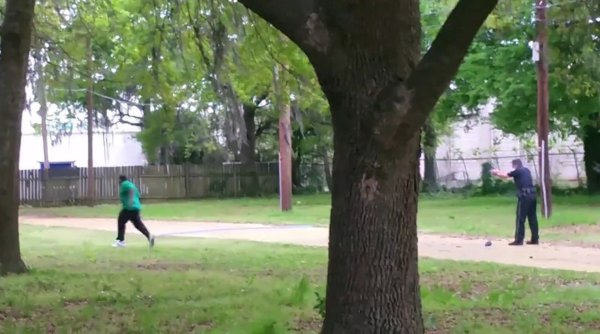 'A Reality Check'
Next Up: Editor's Pick