The Obama Administration responded to a petition on Wednesday saying it supports efforts to ban the use of conversion therapy on gay and transgender minors.

The announcement comes as a response to the suicide of Leelah Alcorn, a transgender teenager who threw herself in front of a trailer-tractor last December and who, in a suicide note, said her parents were forcing her to see therapists who tried to convince her to identify as a boy.

A WhiteHouse.gov petition asking the government to ban such practices after Alcorn’s death has garnered more than 120,000 signatures since it was posted in early January.

“We share your concern about its potentially devastating effects on the lives of transgender as well as gay, lesbian, bisexual and queer youth,” Valerie Jarrett, a senior adviser to the President Obama, wrote in a statement posted in response to the petition. “As part of our dedication to protecting America’s youth, this administration supports efforts to ban the use of conversion therapy for minors.”

By taking a stance on the practice, sometimes referred to as “reparative” therapy, the Administration is following the recommendations by a number of major medical institutions. The American Psychological Association has taken a stance against conversion therapy, saying that it poses a threat to the health of those forced to undergo it. And the American Medical Association, World Health Organization and American Academy of Pediatrics have all also condemned the practice.

Jarrett went on to write that Obama would not issue an outright call for a federal ban, but noted he would support efforts to ban conversion therapy on a state level. That will likely be a long endeavor, as conversion therapy is currently banned only in California, New Jersey and the District of Columbia, the New York Times reports.

This isn’t a completely partisan issue. New Jersey Governor Chris Christie, a Republican, signed a ban into law in 2013. However, similar bills have struggled in other states. Earlier Wednesday, a Colorado Senate committee voted 3 to 2 to strike down a bill that would have outlawed conversion therapy. Nevada and Oregon are currently considering similar measures. 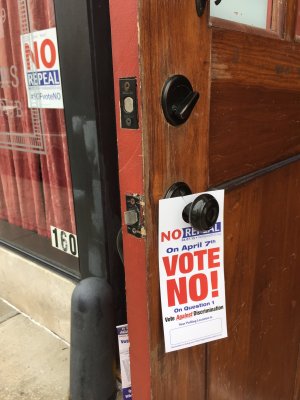