Kareem Abdul-Jabbar: Nothing Less Than an Assassination

Another day, another black man murdered by police.

The problem is that we’re not all on the same page about what we’re outraged over and what changes we want to take place. Police critics will claim this is another example of systemic police racism. Police defenders will claim that this was just one bad apple. We will hear the same calls for more oversight, the same protests that civilians are interfering in matters they couldn’t possibly understand.

African Americans feel like ­Alex in A Clockwork Orange, forced to watch the same news story playing over and over on some hellish loop: “Unarmed Black Man Killed by Police.” We scream, we try to turn away, but we can’t. There’s always another prone body on the screen.

Walter Scott’s killing should inspire less debate than other recent incidents because of the video. Watching the officer shoot an unarmed, nonthreatening man eight times makes it difficult to see this as anything less than an assassination. It sheds no new light. It just adds another body to the body count.

But Walter Scott does not have to be just another tragic name. It is up to us to not let his death be trivialized. If watching this video doesn’t convince holdouts that racism exists, nothing will. Does anyone ­really think the officer would have shot Scott if he were white? Racism deniers are like climate-change deniers, letting their hopes blind them to the harsh reality of facts and statistics and blood.

Scott’s death illustrates the need to push harder for the police reforms that are already in the works: more training, more intense oversight by civilians, body cameras and a zero-tolerance policy toward police officers who let their personal biases influence their actions. We need to be as relentless as the racism we’re fighting.

Read next: What to Know About the South Carolina Cop Accused of Murdering Walter Scott 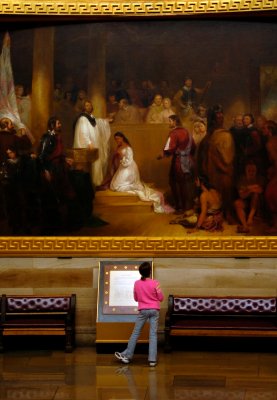 How Native Americans Shaped Washington, D.C.
Next Up: Editor's Pick