When the award-winning artist Stan Douglas wants to visit the past, he makes it happen. The process might start with gathering historical research —maps and photographs of his hometown, Vancouver, in the years following World War II, just to take an example — but he doesn’t stop there. Douglas’ new collaboration with the National Film Board of Canada, led by Loc Dao of the NFB’s Vancouver Digital Studio, goes all the way to full-on time-machine territory.

The project, entitled Circa 1948, comprises an interactive art app for iOS devices — demonstrated in the video above — that will launch on April 22, as well as a full-body immersive experience, which will be on view at the Tribeca Film Festival in New York City starting April 23. Each incarnation of the project provides a window through which the user can visit Vancouver during that period of social and economic change. In the April 21 issue of TIME, on newsstands now, Douglas and Dao discuss how the project came about and what it means.

Douglas’ research into the history of Vancouver started with maps and photo and, after being traced by the NFB’s team into the 3D rendering program Maya, turned into a fully explorable virtual world. It sounds sort of like a game, but instead it’s a story, complete with plot and dialogue, and a clue as to a possible future for storytelling. That’s a future in which the National Film Board of Canada and the Tribeca Film Festival can present something that doesn’t look like anything you’d recognize as a movie.

And, just as Circa 1948 is not a film, it also uses no real photography — though you’d be forgiven for thinking otherwise, given the detailed nature of the computer renderings.

Making an interactive experience has many things in common with making a picture. It’s a question of traditional media versus technical media, Douglas explains. Traditional media — film, painting, poetry, writing — is how he defines art that’s about having an idea, processing it through a human mind and recreating it in the world. Technical media are the forms in which a machine steps between the idea and the finished product; Maya software and a camera can both do the trick.

But it’s the differences between photography and Circa 1948 that may end up having the most extreme ramifications. Terminology from the dominant storytelling formats of the past has altered the way we see our lives, as metaphors from photography and film inform the way we talk about sight and experience. But, Douglas says, those ideas aren’t true mirrors of the way the world actually is. Sight is far from the only way we perceive our lives, and immersive storytelling — perhaps a dominant format of the future — is a chance to open up further possibilities. For example, while a photograph dictates which angle something must be seen from, Circa 1948 allows the user to look at the space from infinite possible directions.

Courtesy The National Film Board of Canada

In the world as in Douglas’ career, photography can coexist with many other media. The artist sees long-term advantages in adding to the list of ways for art to represent the world — and Circa 1948 is, for now, the newest addition to that list.

“We use our technologies to make representations of our perceptual faculties, and in doing so maybe lose all the [range of] possibilities of those faculties,” Douglas says. “If we only see vision as being photographic, we lose the ways in which those things are meaningful as well.”

Stan Douglas is a visual artist who lives and works in Vancouver. Since 1990 his films, videos and photographs have been seen in exhibitions internationally. Loc Dao is the Executive Producer & Creative Technologist of the NFB Digital Studio in Vancouver.

Circa 1948 is premiering at the TriBeCa Film Festival. The project launches with an interactive installation, live event, website and immersive art app on April 23 at Storyscapes.

Lily Rothman is a reporter for TIME.com. 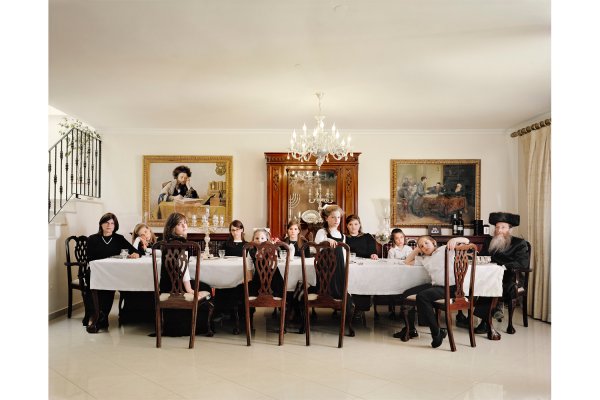 Picturing the Holy Land: 12 Photographers Chart a Region's Complexities
Next Up: Editor's Pick