Royal Dutch Shell Plc is taking over BG Group Plc in a $70 billion deal, the biggest the oil industry has seen in over a decade, and the clearest sign yet of consolidation pressures caused by last year’s collapse in oil prices. Here’s what you need to know.

1. It’s a landmark moment for the sector. Big mergers in the energy industry typically happen when it becomes cheaper to buy oil and gas reserves on the stock market than to drill for them. BG’s shares had fallen over 50% since January last year, and there was no way Shell could develop a comparable portfolio of assets organically for less than what it’s paying for BG today. Even if the number of potential candidates for such deals is smaller than it was 15 years ago, the same logic will surely apply to some other oil and gas companies out there.

2. It’s not about size, it’s about efficiency. The last wave of oil mega-mergers was all about needing a bigger, stronger balance sheet because in order to replace reserves, oil majors were having to go to places which either involved more technological risks (like the Gulf of Mexico or Alaska) or political ones (like Russia, Brazil and Kazakhstan). By contrast, this merger is about squeezing costs out of the supply chain, after a decade in which the industry got fat on the assumption that the demand of China and India for energy could never be satisfied. Shell and BG need to ensure that returns to shareholders can be sustained (Shell was quick to promise higher cash dividends and a $25 billion share buyback program to justify its rationale).

The two companies aim to save at least $2.5 billion a year in costs now and more in years to come. One example of this is in Queensland, north-east Australia, where the two companies have big LNG projects relatively close to each other, and where sharing infrastructure costs will improve the economics of both. Shell had frozen its $20 billion Arrow project (a joint venture with Petrochina) in January, while BG wrote $2 billion off its Queensland Curtis LNG project in December. In all, they expect to squeeze capital expenditure below $40 billion by 2016, from over $45 billion last year. Although the deal will create a bigger gas producer than Exxon, and by far western Europe’s largest integrated player, it will be looking to shed $30 billion of non-core assets within three years. In three years’ time, the company may not end up being much bigger, but it will be a lot leaner.

3. This deal is arguably about gas more than it is about oil. Both companies are big players in the fast-growing global trade in liquefied natural gas (LNG), a trade underpinned by the long-term imperatives of switching China and India to energy sources that pollute less than coal, and giving Europe alternatives to Russian gas. The combined company will be the biggest LNG producer in the world, with a strong portfolio of as-yet undeveloped assets in East Africa and Australia.

4. It’s also about deep-water oil production. Offshore is the other area of business that Shell and BG are prioritising. In a joint presentation Wednesday, they forecast that output from offshore could rise to nearly 600,000 barrels a day by the end of the decade from just under 150,000 b/d today. To do that, they’ll need a big improvement in their fortunes in Brazil, where the development of huge new discoveries has been hobbled by rampant corruption and cost inflation at their partner, Petrobras.

5. It most definitely isn’t about U.S. shale — except inasmuch as cheap shale gas has undermined the math behind the two companies’ investments in importing LNG into the U.S. (where they have no fewer than five regasification terminals). Neither company is a major player in shale from the ‘lower 48′ U.S. states. True, BG has bought acreage in Texas, Louisiana and Pennsylvania, but it produces the equivalent of less than 60,000 barrels of oil a day from them and has repeatedly put off spending big money on developing them. 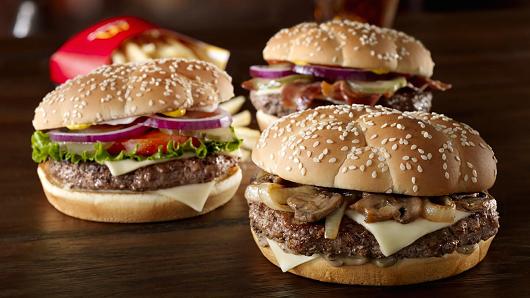 McDonald's Looks to Beef Up Image With Mega-Burger
Next Up: Editor's Pick