From Photography to Film: Stanley Kubrick Enters the Ring

Stanley Kubrick’s professional career began April 12, 1945, as the high school junior — with a prolific track record of absences — wandered the streets of the Bronx and snapped a picture of a crestfallen newsstand dealer surrounded by headlines announcing the death of Franklin Delano Roosevelt. As childhood friend Alexander Singer tells the story, Kubrick immediately ran to his home darkroom, which his father had built to encourage the scholastic underachiever’s budding interest in photography, printed the picture and made a sale that same afternoon to Look Magazine. The following year, when no colleges would accept Kubrick because of his poor academic record, Look hired him as a full-time staff photographer.

Singer and Kubrick had forged a bond over shared scholastic apathy and mutual respect of each other’s extracurricular achievements — Singer as editor of the school literary arts magazine, and Kubrick as the kid with a camera around his neck: “almost a caricature of what you’d imagine a teenage cameraman would look like,” as Singer describes. When plans to photograph a feature-length cinematic adaptation of Homer’s Iliad written and directed by Singer proved too ambitious, Kubrick struck upon the idea to instead translate one of his own photographic essays to the big screen.

That essay was Prizefighter, published by Look in January 1949, and described by Kubrick biographer Vincent LoBrutto as the moment he came of age as a photojournalist. The seven-page story depicted scenes from the life of Bronx-born middleweight boxer Walter Cartier as he trained and prepared to enter the ring against moments from his romantic and domestic lives. Often working under stark, overhead light with infrared film (also favored by his idol, Weegee), Kubrick captured high-contrast images that emphasized Walter’s physique and cast brooding, incisive shadows on his face.

Prizefighter would go on to define Kubrick in other ways, though. It might have been his dawning moment as a photojournalist, but the essay would also serve as the basis of the first film Kubrick would direct, called Day at the Fight, released two years later.

The 20-year old Kubrick made the decision to shoot his first film on 35mm rather than the lighter, more economical 16mm format favored by amateurs—a bold decision by someone who later described the entirety of his motion picture camera training as a hands-on demonstration at an equipment house. Kubrick and Singer used Bell & Howell’s Eyemo, a lightweight camera introduced 1926 for use in newsreels and military applications and advertised, perhaps over-optimistically, “as convenient to carry as the average size ‘still’ camera.” Kubrick photographed most of the project solo, and Singer joined on a second ringside camera to capture the live fight scene. A third camera operator also filmed from high in the auditorium.

Comparing the Prizefighter contact sheets side-by-side with Day of the Fight, one gets the sense that much of the creative legwork had been worked out during the photo essay, which, despite its ostensible documentary subject matter, was chiefly constructed through deliberately-staged scenes. But Day of the Fight is a distinctly cinematic work; particularly remarkable is Kubrick’s ability to control time and add an element of suspense in portraying Walter’s anticipation of the fight, a trait missing in Prizefighter. The first-time director was also aided by the fact that the physical spectacle of boxing lends itself to cinema. After all, the first feature-length film ever released was a 1897 St. Patrick’s Day fight between James J. Corbett and Bob Fitzsimmons. Many of the same setups from the contact sheets and short film are repeated in Kubrick’s subsequent work, particularly his second feature, Killer’s Kiss, a seedy yarn about a down-on-his-luck fighter.

Although Kubrick is regarded as the most critically and commercially successful photographer turned full-time feature filmmaker, this mainstream acclaim might also be the reason his name rarely enters the discussion of the legendary New York-based photographers and their progressive contributions to avant garde and non-narrative filmmaking. This tradition includes Paul Strand (Manhatta, 1921), Rudy Burckhardt (The Pursuit of Happiness, 1940) Helen Levitt (In the Street, 1949), Ruth Orkin & Morris Engel (The Little Fugitive, 1953), William Klein (Broadway by Light, 1958) and Robert Frank (Pull My Daisy, 1959), among whose varying innovations include discrete handheld photography, examples of “life caught unawares,” and blurring lines between documentary and staged situations. Kubrick’s perceived youth and inexperience may be another factor in this oversight: though several writers have supported their praise of The Little Fugitive by recalling that the ten-years-senior Engel claimed a 25-year-old Kubrick attempted to rent his uniquely-constructed equipment for his own first feature (Fear and Desire), Kubrick’s production predates The Little Fugitive by several months. Furthermore, much of Kubrick’s early work has not been widely available to the public — per Kubrick’s wishes, Fear and Desire only recently resurfaced after decades of suppression.

One could hardly argue Day of the Fight is a major work in the context of documentary film or Kubrick’s entire oeuvre, but it remains a fascinating key to understanding the development of Kubrick as an artist and entrepreneur—an under-appreciated example of the maverick cinematic approaches developed by street photographers. Undoubtedly, Day of the Fight is one of the most assured and mature endeavors undertaken by someone approaching a film camera for the first time.

Jon Dieringer is an independent curator and the editor and publisher of Screen Slate, a daily online resource for listings and commentary of New York City repertory film and independent media. 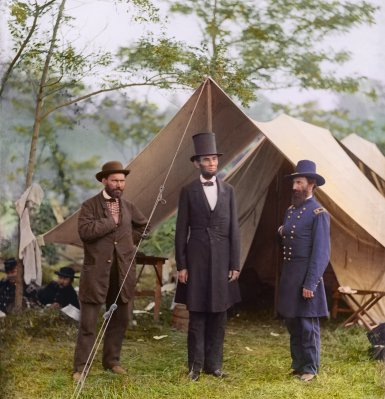 A Vibrant Past: Colorizing the Archives of History
Next Up: Editor's Pick