Alma: A Tale of Guatemala's Violence

LightBox presents an exclusive look at an interactive, narrative documentary about gang violence in Guatemala told through the story of Alma, a young former gang member.

“In an isolated house, there was a girl older than me. Blond, begging to be spared…my whole body was telling me not to, but in the end I killed her. I knew I would get killed myself is I did not obey.” —Alma

Alma was only 15 years old the first time she took a life. As a member of one of the most violent gangs in Guatemala, the Mara 18, Alma spent eight years of her young life in a world ruled by violence. After a brutal beating caused her to suffer a miscarriage, Alma had enough, but her effort to leave the gang was met with an assassination attempt that left her a paraplegic. Today, at 26, Alma hopes to help stop the kind of violence that ruled her life for so long.

Gang violence is an enormous problem in Guatemala—a country of just 14 million people with one of the highest murder rates in the world. Alma’s story is indicative of a pattern that has affected a generation of disenfranchised youth in her country. She grew up in a cardboard and plastic shack in one of the most dangerous slums in Guatemala City. With a largely absent mother and an alcoholic father, gang life appealed to a 15-year-old girl looking for protection and comfort.

“I feel I have never received love from anyone,” Alma said. “I looked for another family in a gang, in which all members were like me, undergoing lack of love…for the first time in my life I felt loved and respected. ”

Sachin Singh, a 20-year-old driver from the village of Barola in western Uttar Pradesh, came home on Tuesday evening to tell his father that the villagers were being treated to free booze by a local political party — a typical vote-grabbing ploy during India's election season. But this time, surprisingly, his father was not interested. “We can buy our own alcohol, thank you very much,” said Jitendra Singh. “Our votes are not for sale.” Hopefully, that sort of political maturity will be taking root elsewhere in Uttar Pradesh (U.P.), which, with a population of around 200 million, is India's most populous state. It goes to parliamentary polls on Thursday, with 80 out of 543 seats up for grabs. And because all the contenders for the position of Prime Minister are contesting constituencies in this state, what happens in U.P. is crucial to each party's political fortunes. Congress vice president Rahul Gandhi is contesting the seat of Amethi. In Varanasi, there's a David-vs.-Goliath face-off between Bharatiya Janata Party (BJP) leader Narendra Modi and neophyte Arvind Kejriwal of the populist, antigraft Aam Aadmi Party. Gandhi’s mother and Congress Party chief Sonia Gandhi is contesting the seat of Rae Bareli. U.P. politics have been traditionally polarized on the basis of caste, but since the 1992 demolition of the Babri Mosque in Ayodhya by Hindu zealots — an act that sparked widespread communal rioting around the country leading to 2,000 deaths — communal tensions, not caste, have taken center stage. At the end of last year, rioting broke out between Hindu Jats and Muslims in Muzaffarnagar, which killed around 49 and displaced almost 50,000 people. Thousands of Muslims are still languishing in refugee camps. An India Today Group-CVoter Mood of the Nation opinion poll predicts that the Hindu BJP, riding high on Modi's popularity, will increase its seat tally by at least 10% this year. It also predicts that the Congress Party will be the biggest loser, winning just four seats. The role of regional parties like the Samajwadi and the Bahujan Samajwadi will meanwhile be crucial in determining the electoral outcomes of India's most politically important state.
Miquel Dewever-Plana—Agence VU

In 2008, Alma met photographer Miquel Dewever-Plana, who has been photographing the violence in Guatemala since 2007. Intrigued by Alma’s beauty and candor, amid such a cruel environment, Plana stayed in touch with the young woman, eventually realizing her story could be a powerful way-in to explain the larger tale of violence in Guatemala.

“I became convinced that her intelligence and forceful nature made her the icon I was looking for,” Plana said in an interview with Le Pelerin weekly’s Catherine Lalanne. “She was the key to understanding the most secretive twists and turns of the gang phenomenon.”

After a year-and-a-half of consideration, Alma agreed to collaborate with Plana and writer Isabelle Fougere. Her story is at the center of a new, multi-platform project centered around an interactive web documentary that presents Alma’s narration in a straight-forward confessional format. Plana’s photographs of her Guatemalan neighborhood and its gangs help to visualize the violent world in which she lived and powerful drawings by Hugues Micol illustrate troubling scenes from Alma’s life.

Working with a team of designers at the French creative studio Upian, Plana and Fougere, say they intended to create a final product—with a sensitive and innovative approach to a narrative— that would be interactive and accessible. The final product, which took two years to develop, is incredibly in-depth—allowing its audience to explore the story through the innovative web piece, two books and a film, all available in four languages. Supplemental materials were also designed for classroom use.

“This combination of media communicates Alma’s reality in the most effective way,” Plana said. “The web documentary was designed to inform young people about the dangers of gang life. That was my ultimate goal.”

Plana and Fougere recognize the confusing emotions that came as their relationship with Alma developed. “I see Alma as a friend,” Plana said. “But I never forget what she did, and it is impossible for me to justify her deeds.”

Plana has worked and studied in Guatemala’s since 1995 and has documented the country’s gang violence since 2007. It was this experience—which included extensive interviews with mareros in prison—that prepared him to understand and contextualize Alma’s situation.

Despite the risk of exposure and the discomfort of reliving such painful experiences, for Alma, the project was an opportunity to bear witness to her past and to attempt to prevent other youth from choosing the same fate.

“It was very painful for Alma to talk without feeling judged, to empty her haunted conscience of all these gruesome memories and guilt,” Fougere said. “This web-documentary is her path to redemption.”

Watching Alma speak on screen, it is difficult to connect the words with the woman. Soft-spoken, with long black hair and soft features, Alma slowly describes in brutal detail taking the life of another woman and enduring beatings at the hands of her “homies.” But it is precisely in this disconnect that the power of this project lies—it emphasizes that Guatemala’s gang violence is not the result of a few crazed individuals, but a tragic consequence of social problems so endemic that they can turn a young girl into a brutal criminal.

“Alma’s extremely violent story seemed emblematic of the desperation of youths from shanty town, totally abandoned by a society rife with corruption and impunity,” said Fougere. “[she is] Both victim and perpetrator of this endemic violence.”

Today, Alma lives a quiet life. Confined to a wheelchair, she works as a gift-wrapper in a shop and lives with her boyfriend, Wilson, in a rented room. Further retaliation from her former gang is a constant threat, but she focuses on her dream of going to college to study psychology.

“I hope that [one]day I have the means to help these young people fascinated by the world of gangs,” she said. “And to finally break this chain of violence which only leads to a certain death.”

Miquel Dewever-Plana is a photographer represented by VU’. See more of his work here.

Isabelle Fougere is a French journalist, writer and director focused on human rights.

Alma: A Tale of Violence was released on arte.tv on Oct. 25, 2012. It was produced by Upian, a French creative studio that has won numerous awards for their web documentaries including First Prize in World Press Photo 2011.

All quotes by Miquel Dewever-Plana and Isabelle Fougere are from an interview with Le Pelerin weekly’s Catherine Lalanne, which is a component of the Alma project. 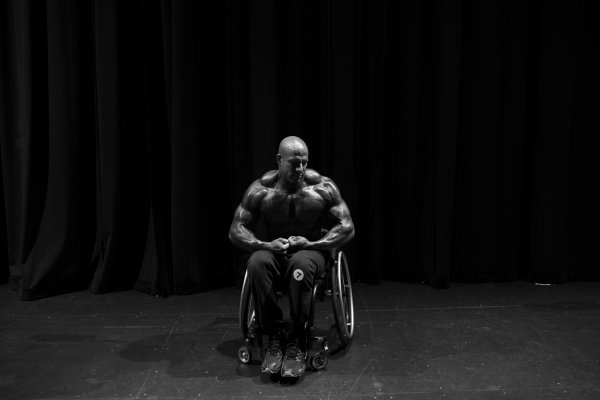 Wheelchair Bodybuilders Muscle Their Way to the Top
Next Up: Editor's Pick