Imagine for a moment hurtling down a roadway as fast as your legs could carry you—all the while blindfolded. Sound scary? Henry Wanyoike does it every day, along the dirt roads around his Kenyan village and on the speedy tracks of Olympic stadiums. Wanyoike, 38, has won three gold medals in three Paralympics—his first in the 5000m at Sydney in 2000—setting two world records for a blind runner in the process. This year in London, he is aiming to medal in his first Paralympic marathon.

The fact that Wanyoike runs at such intense speeds while totally blind is truly remarkable, a testament to both his raw athletic talent and iron guts. I know that from personal experience. I, too, am losing my sight, due to a genetic condition called retinitis pigmentosa. There is no treatment or cure, no way of slowing the descent into blindness. Today, I still see much better than Wanyoike, but I can barely find my way at night or down a crowded street. As I visited Wanyoike in his village outside of the town of Kikuyu, I joined him for a stretch of a morning run. The weather was terrible. A cold rain fell on the unpaved roads, turning them into cauldrons of mud. My sight doesn’t allow me to spot potholes or other potential ankle-twisters, and the raindrops splattering my eyeglasses made that task even more difficult. I struggled to keep my footing. Yet Wanyoike ran beside me, unfazed and sure-footed. He can’t run alone, of course. He is joined by a guide, Joseph Kibunja, who acts as his eyes.

Wanyoike didn’t always have such confidence. As a young man, he seemed headed for a promising career as part of Kenya’s famed running teams, until disaster struck in May 1995. At only 20 years old, Wanyoike went suddenly blind, due to a stroke. Unable to care for himself, let alone run, he became despondent, even suicidal. “I was thinking that was the end of me,” he says. “My dream would never come true.”

Yet it did. After several years, with the help of encouraging teachers and doctors, Wanyoike learned to run again with the aid of a guide. Now he participates in races from Hong Kong to Hamburg, an inspiration not only to disabled people in Kenya, but also to the poor children of his home region of Kikuyu as well. Wanyoike still lives near to where he was born, humbly in little more than an upgraded shack. Though he wishes he could see his wife and children at least once, Wanyoike doesn’t look backwards, to the life he had when he was sighted. “For 17 years, since I lost my sight, I think I have done so many (more) things than what I did for 21 years before,” Wanyoike says. “The most important thing is to accept yourself.”

I’d like to say I found Wanyoike and his life story inspiring, especially since I am facing a similar fate. He is an inspiration, of course, to anyone dealing with disability or adversity. But what struck me most is how differently Wanyoike and I have approached our condition. Wanyoike has come to accept what has happened to him, and has gained strength from that acceptance. I, however, strive to overcome my failing sight by stubbornly refusing to accept the problem exists. My visit with Wanyoike made me wonder if his way is better.

Dominic Nahr, a TIME contract photographer, is represented by Magnum.

Michael Schuman writes about Asia and global economic issues as a correspondent for TIME in Beijing. 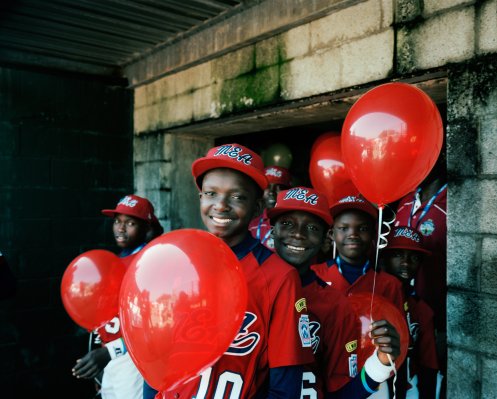 Small Ball! The Faces of Baseball’s True World Series
Next Up: Editor's Pick