From Midnight to Midnight: Life in a Day

The concept was simple: send out a public request via YouTube for video submissions shot by amateurs on one day, July 24, 2010, to forever encapsulate a single day in our history. What started out as a desire to produce something fresh resulted in over 80,000 submissions from around the globe. The contributors were asked to “tell us your story, tell us what you fear and show us what you have in your pockets” so that the footage comprises a cohesive narrative.

Director Kevin MacDonald and his team spent a total of seven months poring over footage, totaling about 4,500 hours, splicing and editing it into a 90-minute documentary.

“I always wanted to give an audience something new—something they haven’t seen before. And of course experience something new myself,” says MacDonald. His inspiration came from filmmaker Humphrey Jennings, one of the key players of the British movement started in 1937 called “Mass Observation,” where artists on a shoestring budget began documenting the everyday life of ordinary citizens. Much like this movement, Life in a Day is an anthropological study of us.

But the most striking aspect of this documentary is that it’s the first crowdsourced, user-generated content to hit the big screen. The term “crowdsourcing” was first coined in 2006 by Wired Magazine writer Jeff Howe to describe how the advancement of technology has closed the gap between professionals and amateurs, thus making it possible for documentaries like this one to be made. And it’s a growing trend, primarily fueled by its cost effectiveness.

Although fine artists have used crowdsourcing during the “Relational Art” movement in the 90s to produce works of art long before the word even existed, more creative organizations are experimenting with it. This Movie is Broken, a film which recently premiered at SXSW 2011, combines fictional narrative alongside crowdsourced concert footage of one of my favorite Canadian bands, Broken Social Scene. And another organization, One Day on Earth, partnered with the United Nations and 60 NGOs to create a video time capsule of one day on earth, October 20, 2010—the project was recently crowdfunded on Kickstarter and will be produced into a motion picture.

In the world of photography, crowdsourcing has been used to annotate photo archives such as the Flickr Commons and to fund photojournalism projects through websites like Emphas.is. Last month, the New York Times’ Lens Blog (in collaboration with EinesTages, Spiegel’s online site), successfully crowd sourced photographs in a Nazi photo album to identify the album’s photographer. The photographer’s identity was discovered within 24 hours of the post going live. More recently, Magnum Photos announced a plan to recruit volunteers to tag and keyword their digital archive.

MacDonald sums up his technical innovation: “The film is doing something that wouldn’t have been possible pre-Internet, specifically pre-YouTube. The idea that you can ask thousands, tens of thousands, maybe hundreds of thousands of people all to contribute to a project and all to communicate about it and learn about it at the same time belongs essentially to this age that we live in.” 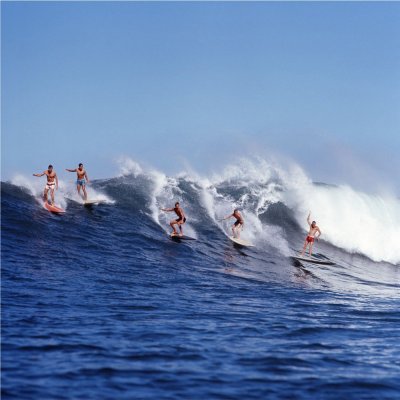 LeRoy Grannis and the Golden Age of Surfing
Next Up: Editor's Pick