It’s perhaps the most American of American-dream tales: The son of Czech immigrants, without so much as a high school diploma, recognizes the vast commercial potential of the humble hamburger and becomes one of the world’s most successful entrepreneurs.

There are a few plot twists, of course, including the fact that it took Ray Kroc more than half a century to dream his American dream. He was 52 when, on this day, April 15, 60 years ago, he opened his first McDonald’s franchise in Des Plaines, Ill. The red-and-white tiled restaurant, with the golden arches that would become the chain’s trademark, sold $366.12 worth of burgers, fries, and shakes on its inaugural day, per the McDonald’s company website. (Today, the chain serves 69 million customers each day at 36,000 locations in more than 100 countries — and reported $27 billion in revenues for 2014.) By the time of Kroc’s death in 1984, his family fortune was worth at least $500 million, per the New York Times.

Before taking the step that would ultimately lead him to the helm of the world’s largest fast-food chain, Kroc paid his dues as a salesman — for 34 years. Half of that time was spent selling paper cups to fast food retailers like Howard Johnson’s and Dairy Queen, and the other half selling “Multi Mixers,” which could mix five milkshakes simultaneously. It was in this capacity that he met Dick and Mac McDonald, two brothers who ran a small chain of hamburger joints in California. They had bought eight of the mixers, and as Kroc once told the Times, “I had to see what kind of an operation was making 40 [milkshakes] at one time.”

He was so impressed with their operation that, despite what he described as “the opposition of family, friends, and business associates,” he opened the first franchise of what he called “the McDonald’s System.” In 1961, when Kroc’s ambitious vision no longer jelled with the McDonald brothers’ goals, he bought the company from them. He was so sure of his strategy that, at the age of 62, he gambled his life savings and then some — and won.

His years of selling paper cups and milkshake machines played a key role in his success, according to the French chef Jacques Pepin, who called Kroc “the ultimate salesman” in a 1998 profile for a TIME special issue about the 20th century’s greatest “builders and titans.”

“Kroc gave people what they wanted or, maybe, what he wanted,” Pepin wrote. “As he said, ‘The definition of salesmanship is the gentle art of letting the customer have it your way.’ ”

McDonald’s has withstood countless controversies over the years, the latest of which is its part as a target of nationwide protest slated for today to pressure the fast-food industry to raise employee wages, but it remains the world’s largest hamburger chain. Likewise, its founder remains a larger-than-life figure in the business world. Kroc, who may be the subject of an upcoming biopic (in which Michael Keaton is reportedly in talks to play the lead), put it this way in the Times: “I guess to be an entrepreneur you have to have a large ego, enormous pride, and an ability to inspire others to follow your lead.” 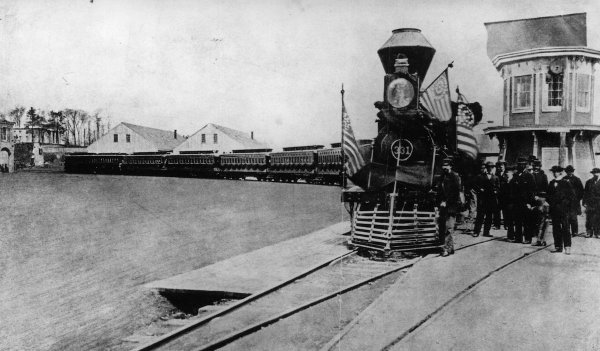 How Lincoln’s Final Journey Brought the Country Together
Next Up: Editor's Pick