What It’s Really Like To Be a Surrogate Mother

The modern American family takes many forms; our living arrangements and relationships are more diverse than ever. Still, Arin, a 31-year-old woman from Greenpoint, Brooklyn, has assumed a role that most women will never experience. She became a surrogate mother — carrying two biological children for her gay stepbrother, Phillip, and his longtime partner, Shane.

For people who want to be parents, but can’t have children of their own, surrogacy is an increasingly common — though complex — option. The American Society for Reproductive Medicine estimates that around 1,000 surrogacy births occur every year in the United States, but there is no official record-keeping for surrogacy and no legal formalities forcing people to document their involvement in the process.

The usual arrangement is gestational surrogacy, which is when an embryo created by in vitro fertilization (IVF) is implanted in and carried by a genetically unrelated female, who is typically found through a private agency. Interestingly, the United States is one of the few countries where it is legal for these surrogates to be paid for their role — other notable exceptions include India, Thailand, and Russia. (U.S. laws vary by state, but generally allow for compensation to surrogates.)

MORE I Got Dumped, Got Cancer, & Got Over It

A less common type of surrogacy is where a surrogate uses her own eggs, which would make her the genetic mother. “I would say that less than 50 births per year come from a genetic mother,” said Hilary Hanafin, PhD, chief counselor for the Center for Surrogate Parenting Inc. in Encino, California. Arin was one of these women.

Phillip and Shane, who live in Seattle, considered gestational surrogacy a few years ago. They had been together for more than a decade and desperately wanted a child. But, after investigating, they found the official procedures for surrogacy — as well as adoption — slow and cumbersome. The thought that Phillip’s stepsister, Arin, might carry their children had come up, but they decided they weren’t yet ready and moved on from the idea.

Then, one late-summer evening in 2012, Arin was visiting Phillip and Shane in Seattle when she decided the time was right. “Let’s just do it!” she remembers blurting over her glass of wine. “Why are we creating this issue? All we have to do is put your sperm in me, and we will have a baby!”

Phillip and Shane, full of excitement and nervousness, agreed. They left dinner, went to Walgreens, bought the necessary equipment to insert Shane’s sperm into Arin, and went home and did the deed. A few days later, Arin returned to Brooklyn. She didn’t get pregnant that time, but it eventually worked.

Arin, Phillip, and Shane’s case is rare by sociological standards. According to Dr. Hanafin, a woman carrying biological children (meaning the egg is hers, rather than implanted from a different woman) for a gay couple is relatively unprecedented. According to Arin, her volunteering as both the surrogate and genetic mother of the child was vehemently discouraged by psychologists she spoke to beforehand.

“They said, ‘That baby will be in your life. You will be attached. It will drive you crazy,’” Arin said. “There isn’t a situation like this out there, at least that we came across. The only other times family was part of it, they didn’t use their own eggs.”

Dr. Hanafin says that there are “rare instances of relinquishment guilt and grief” in surrogates. Women who have had children prior to surrogacy don’t typically encounter any psychological complications when entering a biological surrogacy situation — Dr. Hanafin theorizes that they may be better able to remove their emotions from the process. But, Arin hadn’t given birth to a child previously — which was another unique aspect of her situation.

“I have been counseling for 32 years and have never worked with a woman that wasn’t a mom already,” Dr. Hanafin said. “It’s that unusual. It takes a very healthy group of people to make it work.”

MORE How Does Your State Rank On The Civil Rights Issue Of Our Time?

For Arin, who was 28 at the time and didn’t feel quite ready to start a family of her own, the arrangement suited her. “I wanted to be pregnant and wanted to go through the experience, but not have the responsibility [of raising the child],” she said. The pregnancy was, as she put it, “a fairytale pregnancy.”

As the due-date crept closer, Phillip and Shane rented an apartment in New York City so they could prepare for the birth as a team and be there when Arin went into labor. They also consulted an attorney to finalize the adoption paperwork for Phillip. Since Shane was the biological father, Phillip would become the adoptive parent, with Arin relinquishing her rights as the mother of the child. On June 20, 2013, Dahlia was born: a healthy girl with grey-blue eyes and plump, rosy cheeks.

Medical professionals may have been concerned that Arin would become maternally attached to the child, but she took the transition from surrogate to aunt in stride. “I was not doing this for myself, and when she was born, I was fine with it. It was to the point that it was odd for me to think that I had a child.”

Dahlia, although only a toddler, has been given a full account of the process of her creation. “We want her to know her birth story, where she came from, and how everything happened,” said Phillip. “We have a picture of Arin in her room, and every night we look at it. We say, ‘B-Ma (Biological Mother) loves you,’ and ‘Say goodnight to B-Ma.’ So, for her, it becomes normal. It becomes easy for us to talk to her about it.”

Phillip and Shane were in constant contact with Arin about Dahlia’s development during infancy. (Facetime is a regular thing, and meetups are scheduled every three months, with Arin flying to Seattle or the family coming to New York.) “It’s not like she gave birth and placed her through adoption to a stranger,” Shane said.

It wasn’t more than six months after Dahlia’s birth before the couple asked Arin to carry another child for them.

It took only two tries for Arin to get pregnant, and this time around, they used Phillip’s sperm. Although they have a brother-sister bond, they are not blood-related and wanted to make that clear to avoid any confusion. “We didn’t want people saying, ‘What’s going on here? What’s wrong with this family?” Arin said. The concept of each of them being the biological father of one of their children was very important to Phillip and Shane.

Phillip and Shane’s son, Laydon, was born in Manhattan on January 23, 2015. Arin’s labor was quick and nearly painless, lasting less than four hours.

In the months after Laydon’s birth, Arin has been inundated with photographs, videos, and Facetime sessions with the children — and unbridled appreciation from Phillip and Shane. “Without her, our life wouldn’t be the way it is, and our family wouldn’t be what it is,” Phillip said. “She has literally sacrificed so much and put her own life at risk to help us. We know we will always be in each others’ lives, and now that she is the birth mom of our children, there is even more reason for her to be involved.”

Shane added, “There’s not a word invented that describes the feeling. Sometimes we just look at Dahlia playing and Laydon sleeping, and we think, Is this real? It’s like watching it happen from afar and then it hits you: This is just incredible.”

Now, as spring makes its descent on New York, Arin can be found in her Greenpoint apartment, with her cat sprawled out in the patch of light that pours through the window. Looking back, she can’t help but smile.

“I don’t regret it for a second,” she said. “You forget the pain. You forget the morning sickness. You remember the beautiful moments. I look at these babies and [know] they are a part of my life. I helped create them. Phillip and Shane remind me every day of how I changed their lives.” 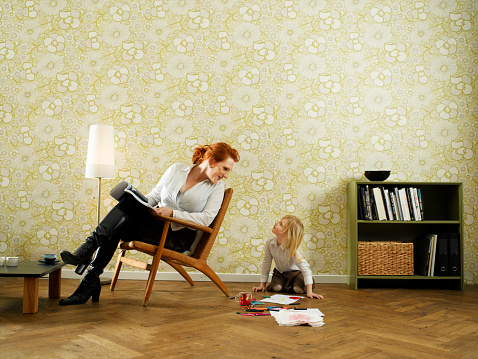 How Do You Talk to Kids About God?
Next Up: Editor's Pick