Kentucky Senator Rand Paul made use of one of his favorite quotations Tuesday, in the speech that launched his candidacy for President: “Martin Luther King spoke of two Americas,” he said. “He described them as ‘two starkly different American experiences that exist side by side.'”

It’s a quote that Paul has come back to time and again. In an op-ed he wrote for TIME in January, he wrote that the problems with the criminal-justice system brought that MLK remark to mind. At the Conservative Political Action Conference in February, he broadened the use of the quote, in the same way he did Tuesday, to incorporate a wider opportunity gap he attributes to the effects of liberal policies.

And, though a politician quoting Martin Luther King Jr. is hardly controversial, it’s in some ways surprising that this particular speech is the one to which Paul is drawn.

The quotation comes from an April 14, 1967 speech delivered by the civil-rights leader at Stanford University. The speech, dubbed “The Other America,” addressed the emerging, new phase of the civil-rights movement, when great legislative gains had been made toward equality on paper, but the much more difficult goal of true equality was still to be achieved. It would be even harder to eliminate economic and educational injustice through governmental channels than it was to overcome segregation, he said, but just as important.

The solution, King declared, was twofold. On one hand, Americans would have to recognize the cause of justice on a personal level. On the other hand, they would have to recognize that although “morality cannot be legislated, behavior can be regulated.” Requiring Americans to practice equality would instill habits that would eventually combat racism on a deeper level, he believed. Fair housing laws, for example, would be a start.

One of his other ideas for a legislative solution to poverty, however, was a little more extreme:

A guaranteed annual income would seem extremely unlikely to appeal to Paul, who launched his presidential campaign with a promise of a smaller, less intrusive government. But it’s not impossible that he might consider such a radical move. Just last year, when Switzerland introduced the idea of a similar program, some U.S. conservatives said they saw it as one way to streamline otherwise-bulky programs to combat poverty. Who’s to say whether “the most interesting man in American politics” might agree? 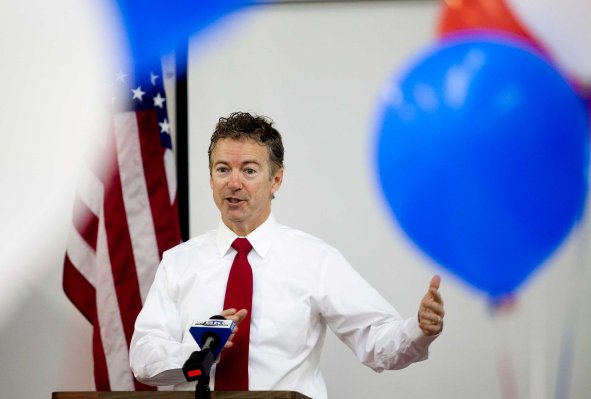 Tricks of the Trade: How To Announce a Run for President
Next Up: Editor's Pick