President Obama Hints at Disappointment With Christians at Easter Breakfast

US President Barack Obama speaks during an Easter prayer breakfast in the East Room of the White House April 7, 2015 in Washington, DC.
Brendan Smialowski—AFP/Getty Images
By Maya Rhodan

President Obama took a more measured approach in his remarks about Christianity at the Easter Prayer Breakfast, following the kerfuffle he caused at a previous prayer event.

Speaking in the East Room of the White House on Tuesday, Obama spoke at length about the meaning of Easter, the Christian holiday that celebrates the resurrection of Jesus Christ, noting the religion’s emphasis on themes of love and acceptance.

“On Easter, I do reflect on the fact that as a Christian, I am supposed to love. And I have to say that sometimes when I listen to less than loving expressions by Christians, I get concerned,” President Obama said, before theatrically stopping himself. “But that’s a topic for another day.”

There was laughter and applause, according to an official transcript.

The response could have something to do with the fact that at the National Prayer Breakfast in February, the President didn’t use the same level of restraint. While discussing terrorists in Syria, Nigeria, Paris and beyond using religion to justify the harm they inflict on others, Obama held a mirror up to Christians, saying they too had in the past used their faith to justify violence.

“And lest we get on our high horse and think this is unique to some other place, remember that during the Crusades and the Inquisition, people committed terrible deeds in the name of Christ. In our home country, slavery and Jim Crow all too often was justified in the name of Christ,” Obama said in that speech. “So this is not unique to one group or one religion. There is a tendency in us, a sinful tendency that can pervert and distort our faith.”

On Tuesday, however, Obama took a different approach. “I’m pulling it back,” he said, to laughter. 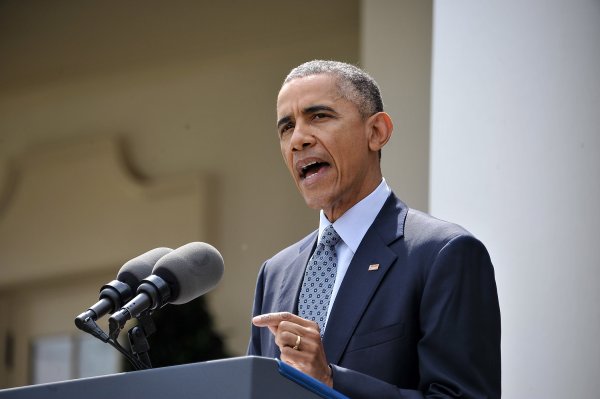