President-elect Muhammadu Buhari speaks moments after he was presented with a certificate to show he won the election in Abuja, Nigeria on April 1, 2015.
Sunday Alamba—AP
By Aryn Baker

When he defeated President Goodluck Jonathan at the polls on March 28, Muhammadu Buhari made history as the first opposition candidate in Nigeria to unseat a president through the ballot box. But the president-elect faces far greater challenges when, on May 29, he takes office and must confront Nigeria’s multiple problems, from an economy that has been hit by the falling price of oil, a government paralysed by corruption, and a security sector beset by one insurgency and threatened by another. If Buhari, 72, is to leave a legacy equal to his history-making victory, he will have to take on these challenges:

Buhari’s All Progressives Congress [APC] party emblem is a broom, symbolizing his commitment to sweeping out the corruption that has plagued Nigeria for decades. He has a proven track record, too. Unlike most of his predecessors and successors, he did not use his time in power, as military president from 1983 to 1985, to enrich himself, and still lives in the modest home of a retired general. But even if he manages to resist the temptations of office, he will have to work with the political elites in his party who brought him to power, largely through Nigeria’s deeply entrenched system of political patronage and its attendant promises of favors and kickbacks. “The APC line is that there will be no corrupt individuals in Buhari’s cabinet, but there will have to be some wiggle room,” says Elizabeth Donnelley, assistant head of the Africa program at London’s Chatham House foreign policy institute. “Deals have been made, and things are owed.” Buhari may not be able to sweep away graft in the short term, but if he immediately strengthens existing anti-corruption institutions that had been intentionally weakened under previous administrations, such as Nigeria’s Economic and Financial Crimes Commission, and oversees the prosecution of standout cases, he will set the right tone. A good place to start would be an investigation into the country’s petroleum ministry, where an estimated $20 billion in oil revenue is thought to have gone missing, according to a 2014 report by Nigeria’s Central Bank.

In tackling the Islamist insurgency that has killed more than 13,000 over the past six years, Buhari faces a three-fold problem. With significant help from neighbors Chad and Niger, along with an estimated 100 foreign mercenaries, Nigeria’s army has managed to push Boko Haram out of all but three local districts, liberating territory roughly the size of Belgium. But in order to keep Boko Haram from re-grouping, Buhari will have to oversee a complete restructuring of an army hollowed out by years of neglect and corruption. He will also need to ramp up security and intelligence services as the insurgents, denied territory, resort increasingly to terror attacks. Two assaults in the country’s northeast over the weekend took several dozen lives, underscoring the urgency. Buhari will also need to strengthen the relationship with those countries assisting in the fight, whose leadership feels that they are doing the bulk of the work with little recognition.

The insurgency has devastated parts of Nigeria. The United Nation’s Deputy emergency relief coordinator, Kyung-wha Kang, says that some 1.5 million people have been displaced by the fighting, creating one of the worst humanitarian crises in the world today. More than 300 schools have been severely damaged or destroyed, and less than 40% of health facilities, in a historically underserved area, remain operational. Farmers have fled fighting in the country’s agricultural heartland, leading to rising food costs and the risk of widespread malnutrition.

Nigeria may have surged past South Africa to become the continent’s biggest economy last year, but that growth has slowed. The International Monetary Fund estimates that economic growth will slow to 4.8% this year, down from 6.1% in 2014, and the Naira is down 17% against the dollar. Inflation is on the rise, and foreign reserves are at a historic low, largely due to the decline in oil and gas prices, which provide nearly 70% of government income. The oil and gas sector only accounts for about 16% of GDP, which means that if Buhari can help the government diversify its revenue base to better incorporate Nigeria’s booming entertainment and telecoms sector, he could oversee a return to better growth. The problem is that when it comes to economics, he is largely inexperienced, and will have select cabinet members with strong economic and business backgrounds. “I believe that Buhari is going to choose a very strong, good team in various departments, but most especially in economy,” Nigeria’s Nobel laureate Wole Soyinka told Bloomberg TV. “I think, like me, he’s an economic illiterate.”

To secure Nigeria’s economic growth, Buhari will have to prioritize his government’s relationship with the militants that upended the oil industry for much of the early 2000s. In 2009, then Vice President Jonathan negotiated a temporary amnesty deal with the militants that saw an end to the attacks on oil pipelines and kidnappings of foreign oil workers that made the region a no-go area and drove the price of oil to record highs. In exchange the militants, who claimed that they had long been denied the oil riches from their native lands, received generous payouts. The deal, which includes education stipends for some 30,000 residents, is set to expire at the end of 2015. If Buhari is not prepared to extend multi-million dollar contracts with local powerbrokers that make up a large portion of the amnesty agreement, the militants could respond with violence, igniting an uprising in the south even as he tackles the Boko Haram insurgency in the north. Buhari could extend the agreement, but better still would be to address the underlying issues: that the Delta’s oil wealth funds the nation with little in return for locals but environmental degradation and a few low-wage, low-skill jobs. 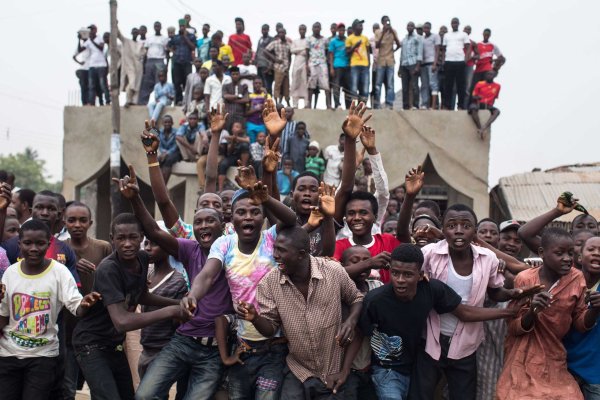