Chinese drones have been spotted over American parks, beaches, cities, and even on the White House lawn. But they’re not of the military variety. Instead, the backpack-sized, camera-equipped aircraft, made by Shenzhen-based startup DJI, are being flown mostly by hobbyists.

The aerial videos taken from the company’s drones have often gone viral, helping DJI build brand recognition. DJI is now the top small drone maker in the U.S., according to Eric Cheng, the firm’s director of aerial imaging. Now, DJI is launching a new model, the Phantom 3, which will ship in the next few weeks. It will be available in in two varieties: The $999 Advanced, which sports a 1080p HD camera, and the $1,259 Professional, which upgrades the optics to 4K.

Notably, they will be the first drones in DJI’s entry-level Phantom lineup to lack an option without a pre-installed camera. While Cheng says having a DJI-made camera on board the Phantom 3 makes for a more integrated and thus better product, it’s also a shot at GoPro, whose action cameras are often used by drone hobbyists and which is said to be working on drones of its own.

The Phantom 3 will also serve as a cheaper alternative to the alien-looking Inspire 1, a $3,399, dual-remote drone aimed squarely at film professionals with big budgets for aerial work. The new DJI drones will compete with rival Parrot’s $499 Bebop and 3D Robotics’ $1350 X8+, though the latter company is teasing a product announcement for next week.

TIME met with Cheng and drone photographer Steve Cohen on a breezy April afternoon at a small field just off New Jersey’s Garden State Parkway to test the company’s newest drone. The new Phantom makes several improvements over its predecessor, including an optional higher-resolution camera and technology that allows pilots to broadcast images the drone captures live over YouTube.

The Phantom 3 connects with multiple global positioning satellites and uses ultrasonic sensors to take off, hover, and land with a simple swipe of a selector on an iPad app that functions as a remote control. With some practice, it’s also highly maneuverable—Cheng managed to spell out this magazine’s name in a flight pattern before we arrived, though we preferred to stick with a flight plan that more closely resembled this magazine’s shape.

After TIME logged a few minutes with the Phantom 3, we handed it over to Cohen, who runs a New York metro area drone hobbyist group that has some 1,200 members. Cohen later gave the new aircraft a big thumbs-up. “The level of innovation and performance cannot currently be beat,” said Cohen of DJI’s drones in a follow-up email.

Whether or not DJI keeps on growing will depend in part on its ability to convince more people they need a drone of their own. For hardcore hobbyists and photographers like Cohen, the company pithes the device as a way to get footage for which you’d otherwise need a helicopter. “Most photographers I know are already starting to think of this as a camera,” says Cheng of DJI’s drones.

But the reasons a more mainstream consumer would buy a drone are less clear: Are they the new GoPro action camera, following and recording you shredding down the ski slopes? The new Selfie Stick, perhaps, to take amazing images of yourself and your crew? Or are they really just for professionals only?

These questions remain to be answered. Cheng acknowledges that more competition is coming. “For sure there will be competitors,” says Cheng. But when asked if there’s any particularly threatening rivals—GoPro, Parrot, 3D Robotics—he demurs. “I can’t think of any.” 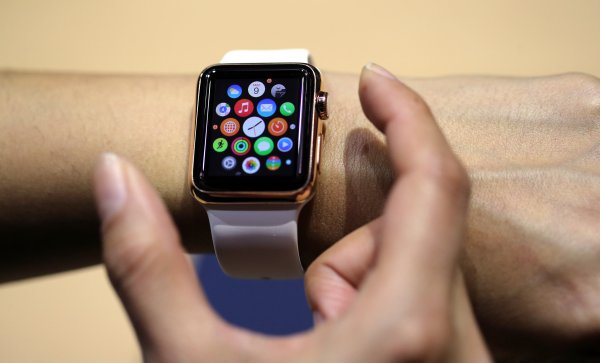 The Apple Watch Is Flawed But You'll Probably Still Want One
Next Up: Editor's Pick