Sen. Rand Paul announced a run for the White House Tuesday, with a campaign launch that aimed to expand the GOP’s tent while stressing classic Republican themes of limited government and fiscal responsibility.

In a mid-morning speech in Louisville, the Kentucky Republican began by paraphrasing a victory speech from his 2010 Senate primary victory, in which he defeated a candidate backed by the state’s GOP establishment.

“I have a message, a message that is loud and clear and does not mince words: We have come to take our country back,” he said. “Less than five years ago I stood just down the road in home town in Bowling Green and said those same words. I wasn’t supposed to win, no one thought I would.”

(The original speech was slightly different, as Paul had then begun by saying that he had he had “a message from the Tea Party.”)

Paul was introduced by an array of speakers, including former Republican Rep. J.C. Watts of Oklahoma; Rev. Jerry Stephenson, who leads an inner-city ministry; and University of Kentucky student Lauren Bosler, and his wife, Kelley, among others.

His speech also contained several nods to his hopes to expand the Republican coalition to include younger voters and more ethnic diversity.

At the same time, Paul ticked off several proposals from the standard Republican toolkit, including a constitutional amendment to force Congress to balance the budget, term limits for members of Congress and increasing school choice.

“We cannot, we must not dilute our message or give up on our principles,” he said. “If we nominate a candidate who is simply Democrat Light, what’s the point?”

Take the Quiz: Who Said It: Ron or Rand Paul?

On foreign policy, Paul split the difference, arguing that he backs a stronger military “unencumbered by overseas nation building.”

He argued that President Obama’s recent negotiations with Iran to end sanctions if the country halts its nuclear weapons programs are inadequate. Noting that he voted for the sanctions, he argued that Congress should also vote on the final deal and said that Obama had negotiated “from a position of weakness.”

“I will oppose any deal that does not end Iran’s nuclear ambitions and have strong verification measures,” he said.

Paul’s announcement made him the second candidate to officially jump in the race, after fellow Sen. Ted Cruz of Texas, who jumped in the race in late March.

Before Paul took the stage, the campaign played a video from country singer John Rich, “Shuttin’ Detroit Down,” interspersed with clips of the Senator talking about his plans for economic “freedom zones,” an idea first pushed by former Housing and Urban Development Secretary Jack Kemp.

Cruz welcomed Paul to the primary with a statement on his website Tuesday.

“I am glad to welcome my friend Rand Paul into the 2016 GOP primary,” he wrote. “Rand is a good friend, and we have worked side by side on many issues.”

Read next: How Rand Paul Wants to Change the GOP 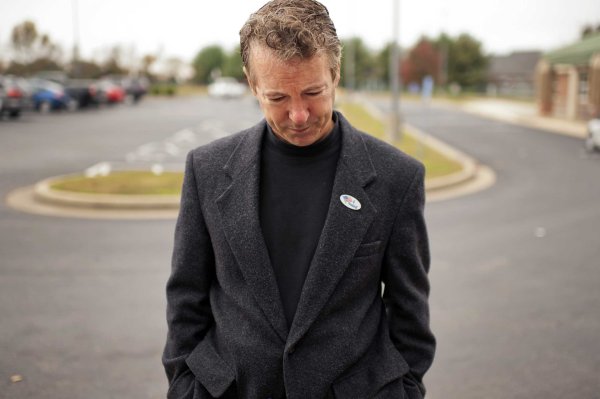 Rand Paul Is the Most Interesting Man in D.C. Fashion
Next Up: Editor's Pick