Philip Glass: 'No One Can Tell You What People Will Be Listening To'

Philip Glass, a man best known for his avant-garde compositions, is in bookstores now with a conventionally lovely memoir. In Words Without Music, the Einstein on the Beach composer and modern experimental music’s greatest crossover success traces his progression from a Baltimore childhood to admission to the University of Chicago at 15 to, eventually, international repute. His book is frank about the struggles he has faced as a composer for whom making money on music seemed an impossibility until, suddenly, it wasn’t.

In conversation with TIME, Glass chatted about how the world has changed for young musicians, why he thinks he’s lost at the Oscars three times and why it doesn’t matter to him if his children have musical talent.

TIME: Do you think about your musical legacy?

Philip Glass: In terms of the musical landscape, I didn’t think about that very much at all. It’s a useless topic to think about, because we really don’t know. No one can tell you, in 30 years, what people will be listening to. You may not be old enough to remember this, but I can remember thinking as a very young man that composers like Schoenberg were going to be eternal. And you don’t hear it anymore!

What was your greatest takeaway from your long stints of work, from driving taxis to manual labor?

I wrote a lot about my working years, and there were a lot of them, until I was 41. I had day jobs until I was 41. Half of my life I’ve lived since then where I didn’t do that. But I know a lot of young painters and musicians, and they are doing that. That’s what they do! Actually, what I tell people is that it was much easier for me than it was for them. I could work three days a week and have enough to live on. You can’t do that today.

Do other countries provide more for their artists?

What’s happened of course is that a lot of support for the arts has been cut back in Europe as well. So it’s not quite the way it was 30 or 40 years ago. A young painter they could expect support from their government, and they got it, but that’s not so true anymore. There’s less money for the arts. Also, there is something else, which is quite interesting, which is that the arts as a metier, as a way of life, as a practice of living, is respected. Very much so. I discovered that in Italy in 1984. I had an opera done in the Rome Opera House. I was still, it was after I’d done my day job stuff, which stopped around ‘79, so it was fairly recently that I had been doing day jobs. When I was in Rome, all the restaurants around the opera knew that I was the composer of the opera; they called me Maestro from the moment I walked in. I was treated in a way that never happens here. New Yorkers have a tradition of honoring the artist as an important personage in society, but for that kind of respect we have to fight for. We fight for it, and we may earn it or we may not.

What do you think of the recent trend of livestreaming opera and symphonies to movie theaters?

Listen, whether it’s a good idea or not doesn’t matter. We’re talking about what’s going on. Let’s not talk about good ideas. On the other hand, there are two answers to that question. One thing, certainly, artists are recognized as more important now than they used to be, probably because our role in the economics of the country is also recognized. When I was a young guy there was a newspaper strike in New York. The newspapers shut down for a few weeks and the first thing that happened was that the plays on Broadway shut down. No one was advertising, no one could see the reviews, and people stopped going to the theater. This really happened, by the way. Certainly there was a mini-depression going on in midtown Manhattan.

The bad side of it, so to speak, was that people started going into the arts thinking they were going to make a living—which was in some cases true, but generally not true. The motivation became cloudy in a certain way. When we were kids, people became sculptors and painters and musicians because they believed in their heart that that was the only meaningful way they could spend their lives. It never occurred to us we could make a living at it. That sort of idealism began to erode. In the new generation of young people, though, I find that idealism has returned. People are playing in theaters in small places—it’s like the bad old days, which were the good old days!

You write about driving cabs during the writing process of Einstein on the Beach. Was there a particular worst fare?

It was just work. The worst was when I was in life-threatening situations, which in those days did happen. There weren’t partitions in the cabs in the seventies. The worst cab fares were the ones where you were scared to death, and it happened to everybody. For me, it was a good job because I could work any night I wanted to. I could go to any garage, get a cab, and work for two, three, or four weeks in a row. I could take off for three weeks and go on a music tour, and then show back up at the garage. They’d say “Hey, Glass, where you been?” I always said I’d been visiting my mother.

Did you want your children to get involved in music? Were they particularly talented?

When I was a kid, I took music lessons because my family thought that was a sign of a good education. I didn’t give my kids music education so they could become musicians. I did it because the training, the habits of work, the things that are required of a young composer or a young dancer, those are lifelong accomplishments. Those are things you take with you. And that’s why we do it.

Would you have been disappointed had they not had a musical aptitude?

No. I knew that anyone who works in that world takes on a risk. Your children doing it, vs. doing it yourself, is a very different thing. The life of an artist requires commitment and stamina. The level of work is not known to most people. Many people work 10- or 12-hour days. I’m one of them. The idea that artists don’t do anything is a myth with no basis I’ve ever seen. When someone makes that commitment, I understand it and empathize with it totally, but not everyone does.

Did going to college at an unusually young age make you more confident, or over-confident?

I’ve asked myself that. What I was doing was quite difficult. I believed it was basically my parents and particularly my mother who had a tremendous belief in their children, and in education, and in hard work and commitment to whatever their goals might be. It never occurred to me that I would not be successful. There it was: I simply accepted the hard work, and I knew it might go on for 40 or 50 years. The work has gone on for 40 or 50 years, but the making a living only happened in my 40s, which is remarkable.

Are you a competitive person?

The big prizes—the Pulitzer Prize, MacArthur, whatever!—I never got those prizes. Never got one. I got a small grant when I was a kid, and that was helpful, but I never won any prizes. I’m in my late seventies. Isn’t that amazing? But the prize money wasn’t for people like me. It was for people who couldn’t manage otherwise. I never envied people getting money, because I thought “The money’s for them, because they don’t know what else to do.” I was free of that whole system and I never applied for anything and I never got anything.

Is it strange to work on film scores, sublimating yourself to someone else’s vision?

There are very, very talented people making movies: writers, directors, and actors. Once you go to the marketplace, things happen, and you might not be happy with the results, but I’ve had very good fortune. Why wouldn’t you want to work with very talented people? Is the downside that you might make some money?

I knew right away I wasn’t going to win an Oscar, but I got three nominations [for Kundun, The Hours, and Notes on a Scandal]. They needed people like me to get nominated so that the people who won looked good! I couldn’t win an Oscar because it’s a voting system, and the people who vote are older. They’re not interested in me. Kundun was the year Titanic won everything in sight. But I won a Golden Globe—I did pretty well! I enjoyed it, I’m shameless about it, and it’s the only time I made real money.

Did you worry that writing about your Buddhist beliefs would open you up to being mocked?

I didn’t talk about it very much. I had to decide how much was going to go into the Buddhist part. With my earlier book, I said it wasn’t that it was a bad thing but my religion is so peculiar but I don’t want it to seem stranger by talking about what I actually do. Thirty years later, I have a different feeling. If I’m going to write a book, and people are going to read it, is there anything I can’t say? Other than not wanting to embarrass others, there isn’t anything I can’t talk about. 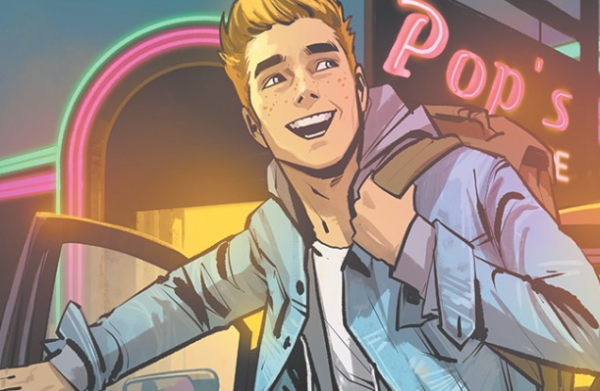 Archie Andrews Got a 21st Century Makeover
Next Up: Editor's Pick