One Sign of Narcissism That Turns Out to Be All Wrong

The mighty I: Narcissists aren't as easy to spot as you think
Hachephotography—Getty Images/Flickr RF
By Jeffrey Kluger

There are a lot of enduring truths about narcissists: they’re grandiose, insensitive, entitled, greedy, sexually exploitative and morally indifferent. And they love, love, love to use the pronoun I—except, as it turns out, they don’t. All the narcissist’s other dubious qualities are very real, but the one about language—perhaps the most straightforward of all—appears to be a myth.

That’s the conclusion of a new study in the Journal of Personality and Social Psychology, and while the use of a single pronoun ought to make a small difference when you’re reckoning with a personality disorder as destructive as narcissism, it actually matters a lot. Overuse of the self-referential I was seen as a quick and dirty way for even lay people to diagnose the condition; now that tool appears to be useless.

The I marker has a long history in narcissism research. The original study that made the link was published in 1988 and found that among a sample group of subjects who took the 40 question Narcissist Personality Inventory (NPI)—an all but universally accepted way of formally diagnosing the condition—people who scored higher indeed tended to utter I more. As I reported in my 2014 book The Narcissist Next Door, other studies in 2011 and 2012 tracked the use of first-person language in popular music from 1980 to 2007, and in literature from 1960 to 2008, and found both to be on the rise.

But there are holes in all of the research: the books and music may be consumed by narcissists drawn by their self-referential tone, but they’re not necessarily written by them, and there’s no telling how the listeners and readers themselves actually talk. What’s more, the 1988 study was a small one of just 48 subjects—a piece of work long considered too thin to go unchallenged.

So challenged it was, and in a very big way, with a research group headed by doctoral candidate Angela Carey of the University of Arizona’s psychology department surveying 4,811 different subjects, all of whom sat for one of 15 different experiments—writing essays or telling stories about their past, completing questionnaires, engaging in stream-of-conscious conversation, offering their Facebook pages for analysis and more. The subjects also took the NPI. And the result?

Pretty much nothing. Among nearly all of the volunteers participating in all 15 studies, there was simply no there there, with narcissists and non-narcissists using the I pronoun with about the same frequency. Among males there was a slightly higher correlation between I use and narcissism than there was among females, but not enough to cross the threshold of statistical significance.

So what gives? Why was a feature of the condition that was considered so intuitively right so demonstrably wrong? Part of the reason, the researchers speculate, may be that narcissists radiate such confidence and cockiness that the expectation is that they use the I pronoun more even when they don’t. “Perceived I talk,” they wrote, “may be part of a perceptual schema of self-confidence or arrogance which, once activated, selectively…draws attention to a person’s use of the first-person singular.”

No less a person than President Obama—who likely ranks high on the NPI, as studies suggest most U.S. Presidents do—was a victim of this misconception. Early in his first term he was criticized for using far too much I talk, but ironically, the authors write, “Obama’s actual first-person singular pronoun [use]…put him at the very bottom of the distribution of modern U.S. Presidents; much lower, for example, than President G. W. Bush, Clinton and G. H. W. Bush.”

None of this mitigates the radioactive nature of the narcissistic temperament or the importance of avoiding their contamination field. Indeed, it makes them even more dangerous if the Geiger counter we’ve been using for decades turns out to have been mis-calibrated all along. 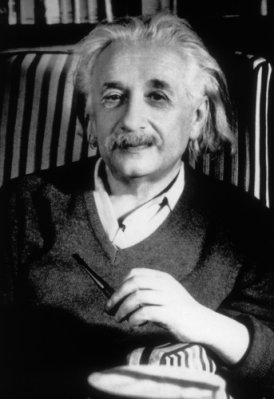 Albert Einstein on the Secret to Learning
Next Up: Editor's Pick