Bianca Acebron Peco, a smart, young and politically active New Hampshire college grad, is exactly the kind of person Hillary Clinton’s proto-campaign would love to have knocking on doors in that early primary state.

But the 22-year-old is ambivalent about Clinton.

“It’s not that I hate her,” Acebron Peco said last week at a New Hampshire Young Democrats event in the basement of a Mexican food restaurant in Nashua. “I just want someone someone new and fresh and isn’t as tied to the old ways things have always been done.”

It’s a sentiment that has been amplified recently by many in the progressive left, who describe Clinton as a centrist and hawkish insider, and complain that she is too loyal to her impressive Rolodex of corporate donors, foreign leaders and Wall Street bigwigs.

“We would consider her a corporate Democrat in stark terms,” lamented Hugh Espey, the executive director of the progressive, Des Moines-based Iowa Citizens for Community Improvement. “She is a middle-of-the-road Democrat that on a regular basis would pick Wall Street over Main Street.”

That groundswell of young, liberal and populist dissatisfaction with Clinton promises to be the central conundrum facing the former Secretary of State’s campaign.

After all, Clinton doesn’t necessarily need young voters like Acebron Peco, and the larger, activist Democratic base, to win the Democratic nomination. She faces very little real electoral competition at this stage in the game. But if she doesn’t win over that loyal base, strategists say she risks setting herself up for a lackluster general election that fails to inspire young people, raise small dollar donations or motivate voters to go to the polls on Election Day. A segment on the left-leaning MSNBC last year worried last year that Clinton could become the Democrats’ Mitt Romney: “kind of tone deaf and unrelatable,” in possession of “competence but no core belief.”

Progressive leaders in the early-voting states of Iowa and New Hampshire see this political landscape as both a burden and an opportunity: in lieu of a real, gloves-off primary battle, which liberal groups like MoveOn.org and Democracy For American would prefer, the populist left must fill the role of Clinton’s primary opponent.

“If you get activists showing up at forums across the state, lobbying them, showing up at debates, asking questions in front of crowds, that matters,” said Jim Dean, the chair of Democracy for America. “If you have that, you can hold candidates’ feet to the fire, force candidates to find their own voice on these issues.”

“Anyone running for office, from President on down, should be running on big ideas that create the kind of change middle class Americans want, need, and deserve,” said Merkley in a statement provided to TIME.

While the progressive left frames their own campaigns in positive terms—an effort to ensure that all candidates embrace populist ideas—it’s also about backing the former First Lady into a corner.

After all, during her quarter century in the national limelight, Clinton has been closely associated with a raft of policies that populists specifically abhor. It was her husband’s administration that filed down Social Security and Medicare (the liberal base would like Hillary to commit to expanding them), passed NAFTA (the base would like her to reject future free trade deals) and repealed Glass-Steagall, a law that separated commercial and investment banking. (The populist left blames the repeal of Glass-Steagall in part for the massive growth of the biggest Wall Street banks and want her to promise to reinstate it.) As both a New York Senator and Secretary of State, Clinton backed U.S. military intervention in Iraq, Libya and Syria—positions that liberals generally opposed.

How Clinton reacts to this pressure remains to be seen, but most expect her to go on an careful offensive: she’ll come out of the gate sometime this week or next talking the populist talk and loudly embracing a ream of progressive policies, such as fair wages, paid family leave and universal early childhood education, that do not alienate centrists. And then she’ll punt, as quietly as possible, on the stickiest issues, such as the Trans-Pacific Partnership trade deal, taxing stock market transactions and raising corporate taxes.

“She has to have a credible challenger before she is pushed anywhere,” said Whit Ayres, a longtime moderate Republican pollster at North Star Opinion Research. “If you were in her shoes, why would you say something that you didn’t want to say? She won’t have to talk about anything.”

Renny Cushing, a New Hampshire lawmaker, who has been active in the left’s effort to draft Warren into the race, agreed that “there’s only one way” to get a candidate to stake out a concrete position: “If you’re in the electoral arena, you really need a candidate. You can’t do it without a candidate.”

But if Clinton avoids committing to populist position, he warned, she’s doomed in a general election. She’s got to take positions on liberal ideas such as breaking up big banks, prosecuting bankers who break federal laws and dealing with rising student debt, he argued.

“Even if at the end of the day, if Hillary is the nominee, she needs to have a political discourse,” he said. “These are the issues that inspire people. She needs to find a way to address that or she can’t win.”

Read next: How Liberals Hope to Nudge Hillary Clinton to the Left 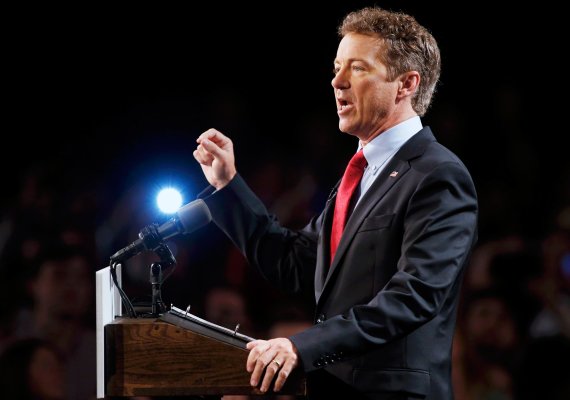