5 Questions That Will Determine the Outcome of the NCAA Championship

I don’t know what’s harder to believe: that there’s only one game left in the 2014-15 season, or that Kentucky isn’t in it. As the shock subsides from seeing the Wildcats’ run at history truncated, let us savor the delectable matchup that awaits us Monday night. For the first time since 2008, two No. 1 seeds will meet for the NCAA championship in men’s basketball. Either Duke or Wisconsin will provide this season’s final answer. Here are the five questions that will decide the outcome:

1. How good is Duke’s defense?

When the Blue Devils went through their rough patch in January, their defense, especially on the perimeter, was so porous that Mike Krzyzewski used a zone defense for the first time in his career. Not only have they fixed those problems, but they have evolved into a truly outstanding defensive team. Just as Duke locked down Gonzaga during the final seven minutes of the South regional final, it blew open Saturday night’s semifinal against Michigan State in the first half, holding the Spartans to just three field goals in their final 20 attempts before intermission.

But guess what: The Blue Devils are not playing Michigan State on Monday night. Rather, they are going up against the most efficient offense in the country, headed by the two most versatile big men in America.

On the other hand, Duke has been doing such a stellar job shutting off dribble penetration that it’s easy to envision Wisconsin guards Bronson Koenig, Traevon Jackson and Josh Gasser having an off night. Remember, Wisconsin leads the nation in turnover percentage and is ranked 345th in tempo. The Badgers rely heavily on their ability to control the ball. If the Blue Devils can force turnovers and get a few runouts, that could be the difference in a close, low-scoring game.

2. Which Sam Dekker will show up?

For casual fans who are just tuning in to the NCAA tournament, Wisconsin’s 6’9” junior forward looks like a consensus All-American. That was not the case for most of the season, and it was especially not true in the Badgers’ loss to Duke in Madison on Dec. 3. On that night, Dekker was hobbled by a lingering ankle sprain and scored five points on five shots. There’s a chance he will take that many shots by the first TV time out on Monday night.

Dekker is playing with maximum efficiency and extreme confidence. On a team that includes the national player of the year, he has been the Badgers’ best asset. His team will need another peak performance to claim the title. So which Dekker will they get: The Dud or The Dude?

3. Can Jahlil Okafor stay out of foul trouble?

Most college basketball teams do not have a forward who is capable of defending Duke’s freshman center in the post without needing help. The Badgers have four. Wisconsin also leads the nation in defensive free throw rate. This team is expert at getting opposing players into foul trouble while keeping its own big guys on the floor.

Okafor has not been dominant lately from a scoring perspective—he scored 18 points in the semifinal against Michigan State but failed to reach double digits in either of the two games in the South regional last week—but his presence forces defenses to adjust. If he’s not in the game, the Badgers can be more aggressive covering Duke’s three-point shooters. Moreover, if Okafor is in foul trouble, the Badgers are probably cashing in at the free throw line. Wisconsin outscored Kentucky by nine on the foul line and by seven on the scoreboard Saturday night. That is not a coincidence.

That’s how many treys the Blue Devils made (on just 12 attempts) when they carved up the Badgers in Madison. It will probably require at least that many for Duke to prevail in the final.

Wisconsin is a good defensive team, but defending the three-point line is not a big emphasis. The Badgers are ranked 309th nationally in three-point defense (37.6%) and 325th in steals percentage. They won’t foul you or let you score at the rim, but they will let you run your offense and shoot over them. Duke needs to maximize those opportunities.

Incidentally, it’s not just the usual suspects, Quinn Cook and Tyus Jones, who need to come through. Junior guard Rasheed Sulaimon came off the bench to score 14 points in the first meeting, but after Krzyzewski dismissed Sulaimon, two other guards, sophomore Matt Jones and freshman Grayson Allen, saw their minutes spike. Both are better three-point shooters than Sulaimon. Duke needs at least one, and more likely both, to chip in.

Why Duke can win the national championship

Sports Illustrated’s Pete Thamel and Brian Hamilton discuss why the Duke Blue Devils are a team built with all the right pieces to win a national championship.

5. How much does Wisconsin have left in the tank?

I refer not to Frank Kaminsky, but the proverbial, metaphysical tank that stores mental and physical energy. If you saw the footage of the Badgers’ postgame locker room celebration Saturday night, you did not see a team that appeared to be focused intently on the task at hand. Yes, the players had good reason to celebrate, but it is not the best way to get mentally prepared for one final battle.

Many excellent teams have been undone by success, so it will require every ounce of effort for Wisconsin to get mentally prepared for this game. This is an old, mature roster that does not include a single player who was a McDonald’s All-American coming out of high school. These kids have been given nothing. They understand the value of focus and hard work. And in case they don’t, they have a grizzled veteran of a coach to remind them. History says this is difficult, but not impossible. After all, the last time an undefeated team (UNLV) lost in the Final Four (1991), the team that beat it (Duke) went on to win the championship.

O.K., it’s time for some answers. So here they are:

Read next: A Wisconsin-Duke Final Is Just Fine 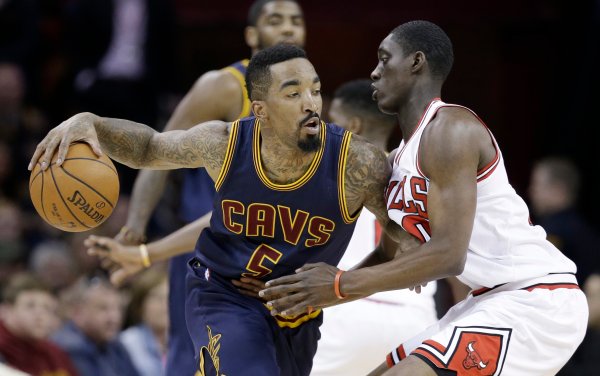 Watch a Mad Half-Court Shot by the Cavs' J.R. Smith
Next Up: Editor's Pick