A man shows the damage inside his house after an air strike in the Okash village near Sanaa, Yemen on April 4, 2015.
Mohamed Al-Sayaghi—Reuters
By David Stout

The Shi‘ite rebels unleashed artillery barrages on residential areas in the city and targeted a pro-Hadi television station with mortar rounds, forcing it off the air, reports AFP.

“There are bodies in the streets, and we can’t get close because there are Houthi snipers on the rooftops. Anything that gets near, they shoot at,” an unidentified medic told Reuters.

Houthi militants continue to consolidate control over large swaths of Yemen, despite 11 days of air strikes from a Saudi-led coalition of Gulf Arab states.

The Houthi assault on one of President Hadi’s last remaining strongholds comes as more than a hundred members of a Sunni Islamist political party were rounded up by Shi‘ite militiamen on Sunday.

Meanwhile, the International Committee of the Red Cross has called for the immediate imposition of a 24-hour cease-fire across Yemen to allow for the evacuation of the wounded to prevent further loss of life.

“Our relief supplies and surgical personnel must be allowed to enter the country and safely reach the worst-affected places to provide help,” said Robert Mardini, head of the ICRC’s operations in the Middle East, in a statement. “Otherwise, put starkly, many more people will die. For the wounded, their chances of survival depend on action within hours, not days.”

Health officials in Aden claim that at least 185 people have been killed and 1,282 injured in the city since March 26, reports the BBC. However, the figure does not include rebel casualties or residents killed by air strikes.

Last week, U.N. Emergency Relief Coordinator Valerie Amos called on both sides to do more to protect civilians trapped in the middle of the conflict.

“Those engaged in fighting must ensure that hospitals, schools, camps for refugees and those internally displaced and civilian infrastructure, especially in populated areas, are not targeted or used for military purposes,” said Amos. 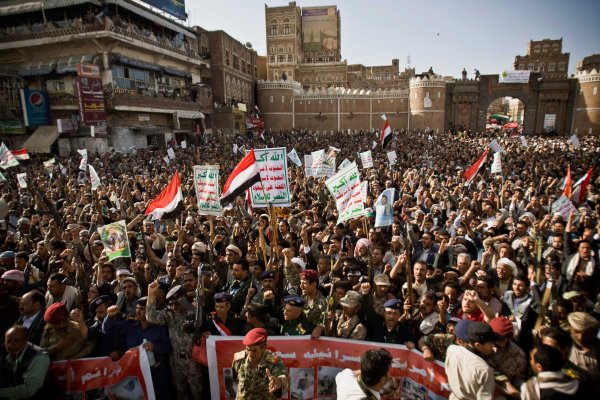 Al-Qaeda Group Frees Hundreds of Inmates in Yemen
Next Up: Editor's Pick