After surviving another season of undead mayhem, The Walking Dead‘s Daryl Dixon, played by Norman Reedus, took on a new kind of enemy during this week’s Saturday Night Live: stoners.

SNL‘s resident young person Pete Davidson learned the hard way that smoking weed can be bad for your health when he showed up to Weekend Update to recap the Walking Dead finale for co-host Colin Jost. After a minutes-long spiel about the coming apocalypse (and jawbreakers), Jost assured Davidson that he was just being paranoid – he’d never really be mistaken for a zombie.

In goes an arrow through Davidson’s chest and in walks a crossbow-wielding Reedus, having seemingly slayed the shuffling comedian before him.

And while Reedus quickly learned that Studio 8H wasn’t overrun by the undead (sorry, dude in the elevator), all was well: Davidson didn’t feel much pain, despite the chest wound; and he was happy to share his, um, medicine with his new zombie-slaying friend. 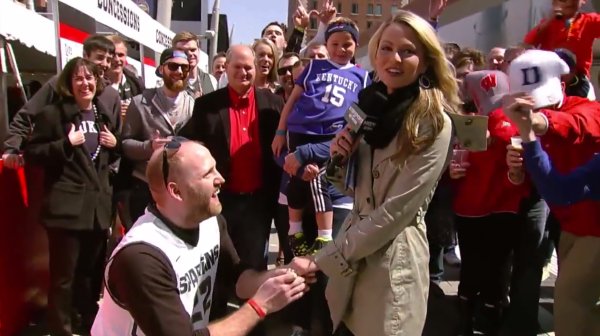 Watch a Random Michigan State Fan Propose to a Reporter on Live TV
Next Up: Editor's Pick