5 Other Women Who Ran For President

With the expected announcement Sunday that Hillary Rodham Clinton will run for president in 2016, the Democratic Party has a female front-runner for the highest office in the land. But Clinton isn’t the first woman to run for president.

Here are five others who sought the White House:

Victoria Woodhull ran for president nearly 50 years before the Nineteenth Amendment allowed women to vote in presidential elections. Though historians can’t agree on whether her name actually appeared on nationwide ballots (or whether she received any votes), they concur that her run was historic—not only was she the first woman to seek the office, but her running-mate, Frederick Douglass, was the first African-American ever nominated for Vice President.

She announced her run in a letter to the New York Herald in 1870: “I…claim the right to speak for the unenfranchised women of the country, and believing as I do that the prejudices which still exist in the popular mind against women in public life will soon disappear, I now announce myself as candidate for the Presidency.” But Woodhull was controversial and polarizing. A fierce believer in free love, she hated how society condemned liberated women, yet turned a blind eye to men’s dalliances. Her presidential run suffered a fatal blow when she was arrested on obscenity charges for writing an article about an adulterous love affair between Henry Ward Beecher, a powerful minister, and a parishioner just days before the election. Woodhull’s campaign was met with widespread derision, but it’s unclear if she could have taken office even if she had won—she was only 34 at the time of the election.

Gracie Allen’s presidential run started as a stunt to generate publicity for her faltering radio show, the The Hinds Honey & Almond Cream Program Starring George Burns & Gracie Allen. During her satirical campaign, Allen used her ditzy persona to poke fun at the political system. The campaign included a mock party convention, a national whistle stop tour, an endorsement from Harvard University and an invitation from Eleanor Roosevelt to speak to the National Women’s Press Club.

“My opponents say they’re going to fight me ’til the cows come home,” she said in a campaign speech. “So, they admit the cows aren’t home. Why aren’t the cows home? Because they don’t like the conditions on the farm. The cows are smart. They’re not coming home ’til there’s a woman in the White House.” Though Allen did receive write-in votes, historians can’t agree on the number.

Shirley Chisholm had already made history as the first African-American woman elected to Congress in 1968, though she admitted that “sometimes I have trouble, myself, believing that I made it this far against the odds.” In 1972 she decided to defy the odds again when she made a serious bid for the Democratic Party’s presidential nomination.

Chisholm called herself “the candidate of the people,” but struggled for acceptance as a viable candidate. Her disorganized and underfunded campaign didn’t help—though she was fourth place for the nomination at the Democratic National Convention, she lost to Governor George McGovern (who in turn lost to Richard Nixon). Though Chisholm was not the first woman to vie for the Democratic nomination, she was the most viable up until that time—but though Chisholm is respected for her political role today (she even appeared on a stamp in 2014), she was never taken as seriously as during her lifetime as Clinton is today.

1972 was a very good year for women presidential hopefuls, and Linda Jenness, a secretary from Atlanta, joined their ranks as the Socialist Workers Party’s candidate. Jenness actually shared the nomination with another female candidate, Evelyn Reed, who ran in her place in states where Jenness did not qualify for the ballot due to her age.

Though Jenness repeatedly challenged Democratic nominee George McGovern to a debate, he refused. Jenness predicted her own defeat, declaring that “the Socialists do not fool themselves that they have a chance of winning any major victories this year.” She was right—but she still managed to garner over 83,000 votes despite tepid press and struggles to finance her campaign.

As a third-party candidate in a raucous election year, Jill Stein’s 2012 presidential run felt more like an afterthought than a milestone. But in fact, Stein’s presidential candidacy was the most successful ever conducted by a woman.

A physician who specializes in environmental health, Stein ran for president after two unsuccessful bids for the office of governor of Massachusetts. “People ask me why I keep fighting political battles in a rigged system,” she said in a 2012 speech. “The answer is simple. I keep fighting because when it comes to our children, mothers don’t give up.” Though Stein only managed to grab 0.36 percent of the popular vote, she still hasn’t given up—she has already announced the formation of an exploratory committee for a 2016 run. 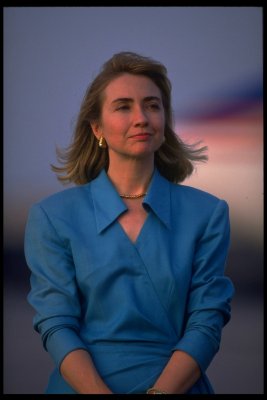 These People Have Been 'Ready for Hillary' Since 1992
Next Up: Editor's Pick