How the U.S. Would Destroy Iran’s Nuclear Program

The U.S. military has been getting ready to bomb Iran’s nuclear facilities to smithereens even longer than Secretary of State John Kerry has been trying to negotiate them away. And while Thursday’s “framework” between Tehran and the U.S. and five other nations could lead to a peaceful accord this summer, the Pentagon is ready if it doesn’t.

Iran has been conducting much of its suspected nuclear-weapons work for years in underground labs and research facilities thought to be able to survive attacks by earlier generations of U.S. military bunker-busters.

So the Defense Department has spent just as much time procuring a bigger punch.

“In October 2014, the Air Force successfully completed one weapon drop from the B-2 aircraft on a representative target,” the Pentagon’s top weapons-tester reported in January. “The test, conducted at the White Sands Missile Range, New Mexico, demonstrated weapon behavior after planned enhancements were incorporated.”

In late 2009, the Air Force quietly circulated a solicitation seeking a “Quick Reaction Capability” to “defeat a specific set of Hard and/or Deeply Buried Targets.” The weapon, the service said, would “maximize effects against Hard and/or Deeply Buried Targets (HDBTs), while minimizing time over target.” The Air Force said it needed the weapon to meet “Urgent Operational Needs requirements”—generally a plea from a battlefield commander who doesn’t think he has the weapons he needs to accomplish a mission assigned to him.

“The system will hold at risk those highest priority assets essential to the enemy’s war-fighting ability, which are heavily defended and protected,” the Air Force elaborated in February 2011 budget documents, “providing a critical global strike capability not currently met by inventory conventional weapons.”

The $15 million GBU-57 Massive Ordnance Penetrator weighs in at about 30,000 pounds, six times the heft of the existing GBU-28 bunker busters and nearly five tons heavier than the 22,600-pound GBU-43, once known as the “mother of all bombs.” The Pentagon has spent more than $300 million for 20 of GBU-57s.

Guided to its destination by GPS-guided lattice-type fins, the GBU-57’s alloy steel hull—some 80% of its weight—is designed to remain intact as it drills through rock or reinforced concrete before setting off its 5,300-pound warhead. Air Force officials have said it represents a “bridge” capability between existing bunker busters and nuclear weapons themselves.

After several upgrades, the Air Force has let it been known that there’s an operational stockpile of the world’s most powerful non-nuclear bombs at Whiteman Air Force Base, Missouri. They’re not far from the B-2 bombers now ready to carry them 7,000 miles to Iran.

A mockup of the Massive Ordnance Penetrator at Whiteman Air Force Base, Mo.
Boeing
More Must-Read Stories From TIME
Subscribe to TIME 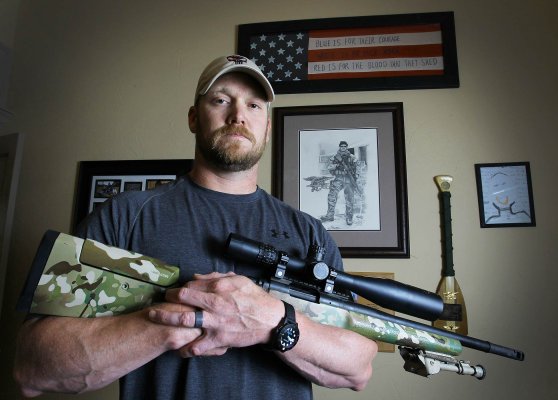 American Sniper Chris Kyle's Father Speaks Out on Son's Murder and Legacy
Next Up: Editor's Pick