The 13 Best Free Smartphones You Can Buy

Motorola announced the new Moto X and G, Moto Hint and Moto 360 by opening its headquarters for media to meet the engineers and designers committed to offering people more choice, control and accessibility in their personal technology.
Daniel Boczarski—2014 Getty Images
By Ben Taylor / FindTheBest

Walk into any AT&T or Verizon store, and you’ll see a shelf full of $0 phones, complete with cheap knock-offs, devices that can’t connect to the Internet, and old handsets from 2012. Make no mistake: when it comes to free phones, you usually get what you pay for.

Here and there, however, you can find a great phone for $0 down. Some companies will offer discounts on devices in a less popular size, while others will drop prices significantly a year after release. Even some of the best flagship models from top brands—like Apple, Samsung, HTC and LG—will eventually drop their prices to $0, as long as you know where and when to look.

With this in mind, we set out to find the best free phones on the market today. Each of the devices on this list will cost you $0 from at least one carrier, as long as you’re starting a new contract.

How did we pick and rank the list? We started with a list of phones that can be purchased for $0 with a new contract. We then looked at specs, features and expert reviews to calculate a Smart Rating for each device. Finally, we ranked our list by the overall ratings, using release date to break ties (the newer the device, the better).

We’ll start with number 13 and work our way to the best free phone of all.

For customers who miss physical keyboards, the LG Enact hides a full QWERTY set-up right underneath its full 4-inch display. It’s the sort of design you’d have to pay half a grand for in 2007. Today? You can snap one up for $0 with a contract.

Samsung fans hoping to save should give a hard look at the $0 Galaxy S4 Mini, a phone with signature Samsung quality, but costing hundreds of dollars less than the newest models.

Praised for its pure Android experience (no needless frills or odd augmentations), the 2013 Moto G remains a smart, sensible buy for people who live on Google services like Gmail, YouTube and Maps.

The Z10 was BlackBerry’s best attempt to produce a modern-style smartphone—complete with the familiar grid of app icons and no physical keyboard. To this day, it’s still a great option for BlackBerry fans who like the way iOS looks but don’t care for Apple’s ecosystem. And best yet, it doesn’t cost a penny.

Generally speaking, bigger phones tend to have larger—and thus longer lasting—batteries. Take the iPhone 6 versus the 6 Plus: the 5.5-inch Plus boasts over 70% more battery than its smaller cousin. The $0 DROID Mini defies this trend—a 4.3-inch phone with a whopping 28 hours of battery. It’s a rare combination at an unbeatable price.

The LG Lucid 3 was made specifically for the tasteful budget phone shopper—someone who wants smooth operation and clean hardware design for next to no cost. The device is also a nice, compact alternative to LG’s parade of big-screen, 5.2- to 6-inch phones.

The Motorola DROID MAXX still offers one of the best batteries on the market, capable of going two full days on a single charge. Sure, the performance doesn’t match the latest flagship phones, but if you simply need something reliable, cheap and long-lasting, this is your handset.

Apple’s pricing structure is steady and predictable: the newest models start at $200, the year-old model at $100, the two-year-old model at $0. This time around, however, the free model (the iPhone 5C) is noticeably different than its more expensive cousins. The newer models feature bigger screens and metal bodies; the 5C sports a plastic shell and compact screen. For some customers, the 5C will be exactly what they want anyway—and they won’t be able to beat the $0 price tag.

The LG G Flex has a novel, curved display—the sort of unique hardware design you’d normally have to pay extra to enjoy. By now, however, enough time has passed—and a new model has surfaced—to make the original G Flex free with a 2-year contract. The curved display isn’t for everyone, but if you’re intrigued, you can try it for free.

Samsung’s small-screen Galaxy Alpha has a premium feel and solid performance. It’s the ideal phone for Samsung fans who never joined the big-screen revolution. With the impending Galaxy S6 launch, Samsung has slashed the price on the Alpha, making this an excellent time to buy.

Yes, the Amazon Fire Phone flopped hard. Sure, the 3D effects were nothing more than a gimmick, and the internals weren’t anything special. A year later, however, the Amazon Fire Phone might actually be underrated. For the Prime subscriber and Amazon shopping addict, there’s still no better phone for optimizing your retail experience. And you can get the whole experience for $0 on day one—a happy consequence of all the bad press.

You might worry that the LG G2 is a little too old to warrant a purchase, as it was first released in fall 2013. Consider, however, that the LG G2’s performance was at least six months ahead of its time, and that the phone served as the prequel to our Editors’ Choice for Best Smartphone of 2014 (the LG G3). A $0 price tag? On that device? Crazy.

And it’s the best Android phone on this list.

HTC One (M8) for Windows

HTC One (M8) for Windows | SpecOut

Normally, you have to sacrifice quality to get a free phone, but the HTC One M8 for Windows is both free and one of the best handsets on the market. Why? It all stems from popularity. Most people are on either iOS or Android, so HTC sells the Windows version at a discount. What’s more, HTC still isn’t as popular as Apple or Samsung, so the company is willing to cut costs to compete. Add it up, and the HTC One M8 is the best free phone you can get. If you haven’t tried Windows on a phone before, this is the perfect place to start. 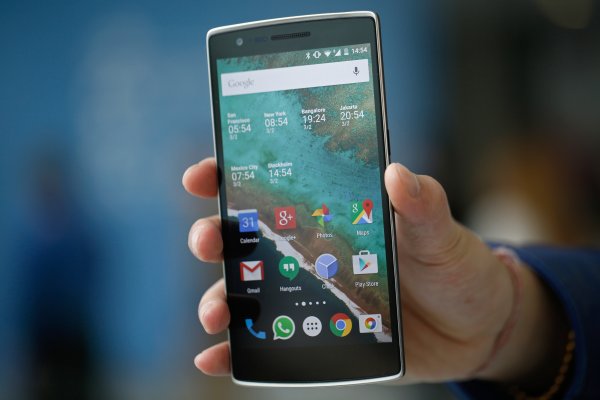