Former Addict: What Indiana Can Learn From New York About Needle Exchanges

Ideas
By Maia Szalavitz
Maia Szalavitz is the author, most recently, of "Undoing Drugs: The Untold Story of Harm Reduction and the Future of Addiction."

In 1986, when I was mainlining cocaine and heroin, an outreach worker almost certainly saved my life by teaching me to protect myself from HIV. Even though I continued to shoot up for another two years, once I knew safer techniques, I used them just as compulsively as I injected. I published the first article arguing for clean-needle programs from the addict’s perspective in the Village Voice, way back in 1990.

Now, nearly 30 years later, an outbreak of 79 new HIV cases linked to IV drug use in Indiana has led its governor to temporarily authorize local syringe exchanges. Every one of these infections was utterly preventable — and each will cost, on average, $426,964, a total of nearly $34 million, even if the epidemic is stopped immediately. A needle that costs pennies can save millions.

The fact that in 2015, federal funding is still banned for needle exchange and 25 states still require people to get a prescription to buy needles is an outrage — both from the human and from the economic perspective. But what’s even more frustrating is that politicians and many journalists still see needle exchanges as controversial when the data on their safety and efficacy is actually stronger than for virtually any other public health intervention, including condoms.

Even a quarter century ago, I didn’t need to rely only on anecdote to make the case. By 1986, the scientific rationale for providing access to clean needles to prevent the spread of HIV was already so strong that in the U.K., Margaret Thatcher’s conservative government endorsed it, creating and funding pilot needle exchanges where needed. At least in part as a result, Britain prevented a national epidemic in IV drug users.

Before syringe exchange was fully expanded in the U.K., however, the town of Edinburgh in Scotland provided an early warning of what might happen if it was not. A 1987 police crackdown on needle possession yielded a 10% rise in HIV rates in addicts there. But after six months of needle exchange, there was no further increase.

By the late 1980s, expansion of needle access had occurred in countries ranging from the U.K. and the Netherlands to France and Australia — and in none of those cases was the policy accompanied by an increased number of drug users. In fact, the Netherlands saw more people seek treatment, and most injectors using exchanges actually injected less than those who didn’t.

Similarly in the U.S., again, as far back as 1988, a study by the New York County Lawyers’ Association compared HIV infection rates in states where needles were available without a prescription — and thus more accessible — to those where they were not. The AIDS rates were six times higher in the more restricted states, and the restricted states actually had more IV drug use, not less.

New York’s decades of experience should be a lesson for Indiana, the federal government and the rest of the states that still limit needle access. In 1990, before exchanges were fully legal here, 54% of New York’s roughly 200,000 injection drug users tested HIV positive. But by 2012, with needle exchange greatly expanded and prescription requirements for syringes dropped, that figure was down to a mere 3%. Though 30% to 50% of new infections were linked to IV drug use in the 1990s and 2000s, today that proportion is around 5%. And the number of new injectors has declined. A state report released last year called needle exchange “the one intervention which could be described as the gold standard of HIV prevention.”

Because such positive findings have also been replicated worldwide, the World Health Organization, the Centers for Disease Control and Prevention, the Substance Abuse and Mental Health Services Administration, the National Institutes of Health, the Institute of Medicine, the American Medical Association and basically every expert health group that has analyzed the data favors syringe exchange and legal needle access.

So why isn’t needle exchange federally funded, and why isn’t over-the-counter syringe access legal in all states? The answers lie in stigma, politics and misunderstanding. Since most people see needle use as insanely risky, they assume that those who use them are completely irrational and unable to change any type of behavior until they give up drugs.

This is incorrect. In fact, it’s often easier to get addicted people to use clean needles than it is to get men who don’t take drugs to use condoms. That’s because there’s no downside to clean syringes: they work better than shared ones because they are sharper and therefore both less painful and more likely to give a good high by accurately hitting a vein. Condoms, in contrast, are unfortunately seen by many as diminishing pleasure or creating an extra hassle during sex.

The idea that needle exchange “encourages” IV drug use also isn’t borne out, even though it sounds plausible. In fact, the reason most people don’t shoot up is not lack of needle access; it’s that they find the idea unduly dangerous, disgusting and even repellant. Needle exchange doesn’t change that.

As for people who are already addicted, generally they don’t need any encouragement to use more. Most addicted people use as much as they can. Perhaps counterintuitively, however, needle exchange aids recovery by providing an alternative path to it.

When you are addicted, you suffer no shortage of shame and distress about being so. Indeed, if you truly believed you could live safely and happily without drugs, you’d quit. Unfortunately, abstinence-based drug programs require you to give up substances — the thing you most fear doing — in order to participate.

In contrast, needle exchanges “meet you where you’re at.” By giving needle users what they need to avoid infections, the programs demonstrate viscerally that they believe addicted people have value, even if they can’t or won’t quit.

That nonjudgmental acceptance is incredibly rare in lives beaten down by serious addictions — and it often opens the door to hope. Participants in needle exchanges see that they can take action to become healthier. They also observe that the workers who hand out the needles are often former addicts, who illustrate that change is possible.

Some injectors start volunteering at the exchanges themselves and see that they can make a difference to others. Then, they often begin to want to improve themselves even more, maybe even by quitting drugs. As a result, needle exchanges have become a large source of referrals to treatment, not a diversion away from it.

More than three decades of overwhelming data now shows that needle exchange programs do tremendous good, while causing no discernible harm. The only reason to oppose them today is ignorance — or petty politics.

Governors and Congress have a stark choice: they can either “send the right message” to those who know nothing about the issue and restrict needle access, or they can save lives and money. As I wrote back in 1990, dead addicts don’t recover. 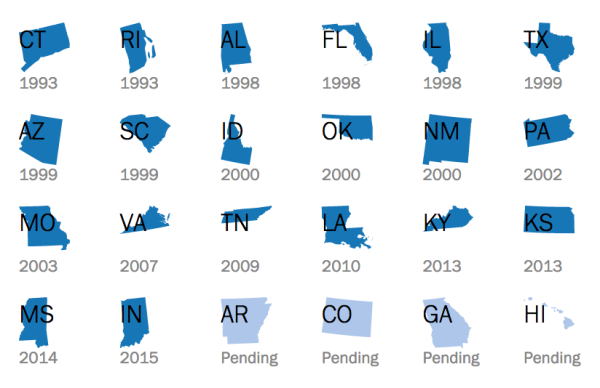 This Map Shows Every State With Religious Freedom Laws
Next Up: Editor's Pick