Review: Louie Gets Back to Basics

One of the beauties of Louis CK’s Louie (returning April 9 on FX) has been that it allows itself to be whatever kind of show it needs to be. Does he have a funny story? Then it’s a comedy. Does he have a dramatic one? It’s a drama. It’s dirt-and-concrete realistic except when it’s nuttily surrealistic. There’s continuity unless something needs to happen and then be erased forever. If Louis CK has a story that needs five minutes to tell, that’s what he gives it; if he has a longer one, he’ll turn the show into a feature-length movie, as he essentially did twice last season.

In season 5–or the four episodes I was sent, because who knows after that–Louie is experimenting with being a weekly half-hour TV show. There are still continuing elements (Louie’s relationship with Pamela, for instance, carrying over from last season) and some short vignettes, but the episodes tell single stories that end at the half-four’s end. They are, by and large, blisteringly funny, even when they’re also poignant. (Prove it? If I give you examples, I’ll ruin them for you; you’ll have to take my word.)

There’s even the return of a long-lost friend: the opening titles and theme song, MIA since season 3. The simplest way of putting it is that the season looks like a return to basics, to the extent that there is a “basic” setting for this free-form canvas about Louis CK’s floundering, philosophical, single-dad alter ego. The confidence and adventurousness of Louie‘s experiments are still present, but reined in and focused. Louis CK has become a filmmaker who can make his instrument sound like he wants–filthy, funny, even scary. But as his character has become maybe a little more stable, so has the show. (It will also, unfortunately, be shorter; the season will be only seven episodes.)

It’s tempting to say that Louis CK is responding to criticisms last season that his show had gotten too artsy and ponderous. But deep down I don’t really think he writes anything reactively that way. If he had a four-hour Louie movie in him, he’d probably make it, and FX would be glad to take it. (One of the comedian’s great insights was to realize that the key to creative freedom was to deliver a good show cheap.) What are you going to do to him, really?

But there are moments in the new episodes that seem to comment on the last season. Talking to Pamela, Louie launches into a childhood story that starts out looking like his ninety-minute “In the Woods” flashback episode from last year, and she cuts him off: “This sounds long and boring.” And after several episodes last season that raised hackles over Louie’s relations with women, the fourth episode finds him role-reversed by–

Ah, but again, I risk saying too much. Suffice it to say that Louie has again successfully reinvented itself, this time as what it used to be. 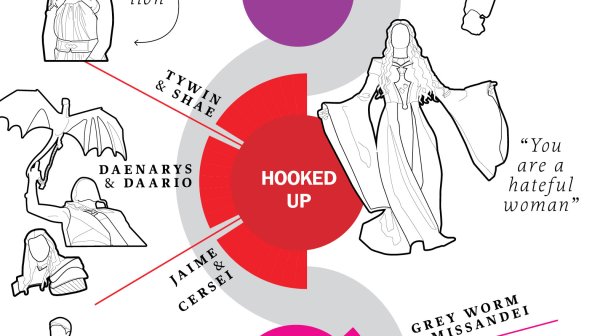 Everything to Know About Game of Thrones Before Season 5 Starts
Next Up: Editor's Pick