Facing declining sales and a growing protest movement against its labor practices, McDonald’s announced Wednesday it’s boosting hourly wages for hundreds of thousands of workers. But the change won’t actually affect most of the men and women who wear a McDonald’s uniform.

McDonald’s employees affected by the pay raise will see their hourly earnings rise to at least $1 above the local minimum wage, a rate that will work out to an average pay of at least $10 per hour by the end of 2016. However, the raise only applies to U.S. locations that are owned and operated by McDonald’s itself.

Most of the world’s Big Macs are made at franchised restaurants, properties that McDonald’s owns or leases but hands over to independent businesspeople to operate in exchange for rent and a 4% cut of the restaurant’s sales. Franchised restaurants make independent hiring choices and set their own wages. Because of this business model, just 12% of the 750,000 workers at U.S. McDonald’s locations will qualify for the wage boosts — or the paid vacation time the fast food chain is also implementing.

The announcement, which new McDonald’s CEO Steve Easterbrook called an “initial step,” drew the immediate ire of Fast Food Forward, a union-backed group that’s been organizing a series of one-day fast food worker strikes that started in 2012. The group is planning fresh protests for Thursday, decrying McDonald’s pay increase as a “PR stunt.”

“McDonald’s needs to step up to the plate,” Fast Food Forward director Kendall Fells said on a conference call with reporters Wednesday, noting that the vast majority of workers weren’t receiving raises. “We’re going to show McDonald’s that this movement won’t stop until we get what we deserve.”

That McDonald’s chose to make a public statement about its new wage policy illustrates how quickly discussions about low-paying jobs have shifted recently, says Dave Sherwyn, a law professor at Cornell University’s School of Hotel Administration. That change in the public conversation has been largely driven by those pro-union groups, who, as much as they accuse McDonald’s pay raise of being little more than a savvy public relations move, have themselves done more to raise publicity than actually threaten the daily operations of the country’s fast food chains.

“This is a pretty unique situation,” says Sherwyn. “I can’t imagine if McDonald’s, Burger King or anyone had done this five years ago, they would have made a big announcement about it. It just wasn’t in the public conversation.”

The spotlight will now be thrown on the franchise owners, who will be watched closely to see if they follow the lead of McDonald’s corporate office. That’s partially because the strikes have helped more consumers learn how McDonald’s franchise structure works, something that might not have been clear to your everyday customer just looking for a Big Mac with fries.

“The franchise arrangement, not obvious to everyone, will now be more obvious,” says Jefferson Cowie, a professor of labor history at Cornell University. “Pressure will boil up from below, putting pressure on the franchises to follow suit with the corporate policy on wages.”

McDonald’s wage increase comes just as the company’s legal obligations to its franchisees are coming under intense scrutiny. The National Labor Relations Board began hearings this week to determine whether McDonald’s should be considered a “joint employer” along with franchise owners. Such a designation could make McDonald’s responsible for hiring practices, wage levels and labor violations at individual restaurants, fundamentally upsetting its lucrative franchise-based business model — a model shared by many of its rivals, too. About 60% of all U.S. fast food restaurants are franchise establishments, according to a 2007 study the U.S. Census Bureau. If the labor board rules McDonald’s is a joint employer, it could spell the end of the franchise system as we know it. 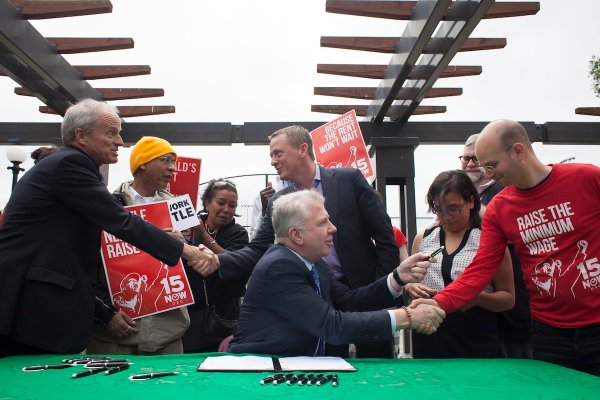 A Surprising Historical Parallel for Seattle’s Minimum Wage Fight
Next Up: Editor's Pick