Christians Hunted Down as al-Shabab Kill 147 in Kenya

Students evacuated from Garissa University College listen to an address by Interior Minister for Security Joseph Ole Nkaissery before they are transported to their home regions from a holding area on April 3, 2015.
Carl de Souza—AFP/Getty Images
By Aryn Baker

At least 147 people have been killed and 79 wounded in the Thursday’s attack on a Kenya university, according to the Kenya National Disaster Operation Centre. The centre says security forces have rescued more than 500 students from the Garissa University College campus but fighting is still going on.

For the past two weeks intelligence agencies in both Uganda and Kenya have issued warnings of possible terrorist attacks by the Islamist group al-Shabaab. The alerts urged caution about going to venues popular with westerners in Kampala, and vigilance around major infrastructure projects or universities in Kenya. Those warnings bore fruit just before dawn on Thursday as masked militants stormed a university dormitory complex in the Kenyan town of Garissa, launching grenades and firing guns.

President Uhuru Kenyatta released a statement urging Kenyans to “stay calm as we resolve this matter,” and extended his condolences “to the families of those who have perished.” He begged Kenyans to “provide the authorities with any information they may have in connection with any threats to our security” while announcing that the government had commenced the “appropriate deployment” of security forces. Reports from Garissa show that Kenyan tanks are heading to the sealed off university area, and that the militants have gathered on the roof, preparing for a violent showdown even as hostages huddle inside.

Earlier on Thursday, student Collins Wetangula told the Associated Press that when the militants stormed his dorm, he could hear them demanding if residents were Muslim or Christian. “If you were a Christian you were shot on the spot. With each blast of the gun I thought I was going to die.”

“All I could hear were footsteps and gunshots nobody was screaming because they thought this would lead the gunmen to know where they are,” he said. “The gunmen were saying sisi ni al-Shabab (Swaihi for we are al-Shabaab).”

Al-Shabaab, which means “the Youth,” got its start in Somalia as the militant youth wing of an Islamist government that was defeated in 2006. With fighters numbering around 8,000, including several foreign recruits, it soon regained territory in southern Somalia. Al-Shabaab even held the capital, Mogadishu, until a U.N. backed national government forced it out in 2011 with the help of African Union forces. Reeling from a loss of terrain and resources, the group started launching raids and kidnappings across the border in Kenya in search of income. Kenya responded by sending troops, which engendered more retaliatory attacks. In 2012, al-Shabaab pledged allegiance to al-Qaeda, and the effectiveness of its attacks increased as a result.

Al Shabaab, which brutally enforces a strict interpretation of fundamentalist Islam, still controls large swaths in the rural south of Somalia where it promises security in exchange for protection from the lawlessness that has afflicted the country for more than two decades. But as African Union forces and U.N. peacekeepers squeeze al-Shabaab from territory it once claimed, the group has lashed out with increasingly sophisticated terror attacks. Neighbors Uganda and Kenya, whose governments contribute troops to the U.N. and African Union military missions in Somalia, have borne the brunt of their anger. The Garissa raid is but the latest in a string of devastating terror attacks that have rocked Kenya since the 2013 assault on Nairobi’s Westgate shopping mall, which killed 67. Uganda, too, has been targeted: on Tuesday suspected al-Shabaab gunmen on a motorbike shot and killed the Ugandan prosecutor presiding over the trial of 13 men implicated in a 2010 twin suicide bombing claimed by al-Shabaab. After each major attack claimed by the group, a spokesman invariably states that the assaults are revenge for that country’s military adventures in Somalia. The Garissa attacks are unlikely to be any different. 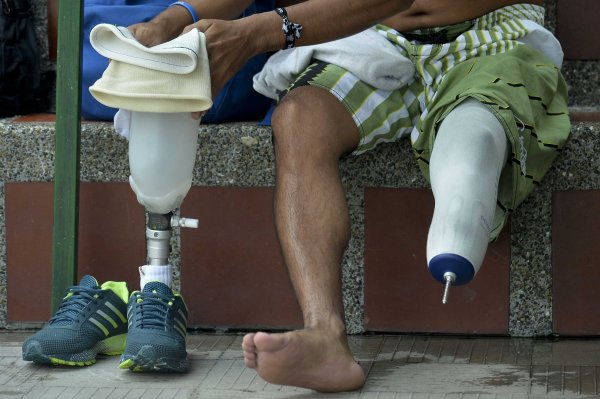 Inside the Struggle to Clear Colombia of Mines
Next Up: Editor's Pick