A young man rests next to a destroyed house at the shanty town Vila Autodromo, which is located close to the Olympic Park built for the Olympic Games Rio 2016, in Rio de Janeiro, Brazil, on 01 April 2015.
Antonio Lacerda–EPA
By Anna J. Kaiser/Rio de Janeiro

The countdown is on until the 2016 Olympics and Rio de Janeiro is preparing to welcome millions of people from around the world. But in order to succeed as hosts, the Brazilian city — which won the bid to host the Summer Games back in 2009 — must address the social tensions, environmental problems and water crises that threaten to marr the biggests sporting event in the world. Here are four of the main challenges Rio must tackle before the Opening Ceremony.

Guanabara Bay borders Rio de Janeiro’s east side and is the host site for the Olympic’s sailing and windsurfing events. It’s also made international headlines due to its polluted waters, filled with raw sewage and massive amounts of garbage. While part of Rio’s Olympic bid included a promise to clean up the bay by 80 percent, the state environment secretary, Andre Correa, admitted in January that it would not be possible. They’re currently at 49% of their cleanup goal.

Mario Moscatelli, a biologist and outspoken bay advocate, says the state has the technology, time and money to make significant improvements but that politicians are not interested in making it a priority. He believes they never intended to fulfill this promise and tells TIME they “simply lied” to get the Olympic bid.

Mayor Eduardo Paes told CNN last June that pollution doesn’t pose any health risks for the athletes, but Moscatelli thinks otherwise, claiming that sailing in the bay is “like playing Russian roulette.”

“Sailors run the risk of hitting anything from plastic bags to a car bumper, pieces of wood, tires and even furniture,” he warns. “Falling in the water, the sailors could potentially be victims of gastrointestinal infections, mycoses, otitis or hepatitis.”

2. The water and energy crisis

Brazil is suffering from the worst drought in 40 years. The southeastern city of São Paulo has started rationing water and Rio could be next. Making matters worse, Brazil gets about 70 percent of its energy from hydropower. In Brazil, water crisis equals an energy crisis.

The Minister of Mines and Energy, Eduardo Braga, also made a frightening announcement last week: the turbines on Brazil’s principal hydroelectric plants will stop running if water levels dip below 10% capacity. They’re currently at 17%.

According to the U.S. Energy Information Administration, the Brazilian government spent $5 billion to subsidize fossil fuels to make up for lost hydroelectric power in the lead up to the 2014 World Cup and may have to do so again for the Olympics.

In the informal settlements known as favelas, about 8,000 families have been, or are at risk of, removal from their homes for construction linked to the Olympics and the World Cup, according to a 2014 study done by an activist group, the Popular Committee. While the government has been praised for promising market-rate compensation for those evicted, in practice it seems there is no standard price per square foot. A recent study by MIT reported that government officials go from house to house and negotiate behind closed doors. Residents think this is both an intimidation tactic and has sparked rumors of how much people are receiving.

Meanwhile, the “Olympic Legacy” in Rio has been criticized for serving mostly the interests of the private sector and the wealthy. Olympic sites like the golf course and the Olympic Village will be handed over to private construction firms who plan to build luxury apartments, made possible through a financial model known as Private-Public Partnerships (PPP). PPPs mean that private construction firms are footing 60 percent of the bill for Olympic construction projects. While it saves public money, the construction firms are then able to develop the land for profit. Another report by the Popular Committee describes the PPP model as “the eviction of a low-income community, that the city of Rio has made their priority to remove in order to make room for yet another commercialized project.”

Professor Mauro Kleiman, an urban studies professor at the Federal University of Rio, agrees that the legacy will primarily serve private interests, excluding public transportation projects like the extension of the metro and rapid transit bus lines. “The legacy is [in] the interests of real estate development and the tourism sector,” Kleiman tells TIME. “So far, we’re seeing inflated costs, similar to in Greece [where the 2004 Olympics were held in Athens].”

While street crime has generally fallen over the last 30 years, Rio has seen a spike in street robberies in recent months, reaching levels not seen since 1991.

In March alone there were seven mass robberies, known as arrastões, in public spaces. Armed robbers assaulted commuters twice in the metro and another group of armed criminals closed off a major tunnel and robbed the stopped cars.

A representative from the Rio State Security Secretary said they are responding by increasing police presence in strategic points throughout the city and pointed out that the city of Rio has held major events like the World Cup and Pope Francis’ visit with no major security incidents. 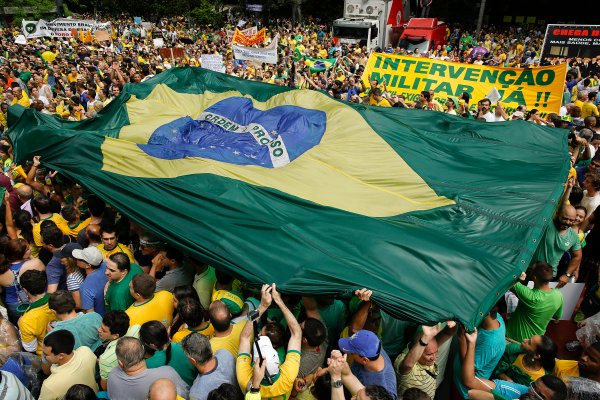