Yesterday I finished reading a new book by an enterprising man named Jia Jiang. It’s called Rejection Proof: How I Beat Fear and Became Invincible Through 100 Days of Rejection, and thanks to Jia Jiang, I’m now questioning my entire adult life. Or specifically, what I might have become if I weren’t afraid of you-know-what.

Until yesterday, I’d always believed that one of the real benefits of adulthood was learning that rejection is something you want to avoid. O.K., perhaps nincompoops who appear on reality shows have some primal need to be rejected, and in front of the nation at that. But for me, as for many of us, adult life brings rejection enough–from mind (which refuses to commit to memory the names of any new countries formed after I turned 22), from body (right knee: I’m talking to you), from soul (why do the people I love actually have to die? Can’t fate make any exceptions?). In other words, there’s no need for me to go out looking for rejection. It’s everywhere.

And so comfort becomes the goal. Which means that three-inch heels are no longer worth it, I’ve dumped all my friends who make cutting remarks and then say, “I’m just joking! Lighten up!” and I want to eat pasta Bolognese every night of the week. But the pursuit of comfort means childhood dreams begin to fade. Jia’s childhood dream was to grow up and become Bill Gates. My childhood dream was to get a job at Friendly’s and have long, oval-shaped fingernails like Claire Fleming, who was also a cheerleader and had a boyfriend with a beach house. Unfortunately, I was rejected in both pursuits, both by fingernails that refused to grow and a Friendly’s management that did not recognize my manifold talents.

Unlike me, though, Jia couldn’t let go of his childhood dreams. He began to regard comfortable adulthood as a problem. So he quit his secure corporate marketing job in Austin, tried to launch an app, was rejected by a big investor, felt defeated for about half an hour and then cooked up this project to get rejected 100 times in 100 days in order to “beat fear.”

As it turns out, beating fear means making outlandish requests of strangers, videotaping the experience and uploading it to YouTube. On Day 3 of Jia’s quest, for example, he marched into a Krispy Kreme and asked for five doughnuts fashioned in the shape of the Olympic rings. And you know how things go with social media: one minute you have a video of yourself with five Olympic-ring doughnuts, the next minute you have a movement and a book deal. (Why doesn’t anybody just publish a book anymore? All new authors have movement-books, with blogs and TED talks and YouTube channels. Where is Emily Dickinson when we need her?)

By the time I finished Rejection Proof, I was feeling like a Class A slacker. Jia is so daring! So entrepreneurial! So alive! Not to mention a husband who is so sweet (or, uh, canny) that for his 100th rejection challenge, he decided to help his wife Tracy get a job at Google. Which, of course, is impossible. But Jia prevailed, because by that point his project had made him invincible. And so he and Tracy and their toddler son Brian moved to Silicon Valley. Cue the happy ending.

But I’ve got a new challenge for him.

A few years back I read a moving essay in the New York Times by a mother of children in their 20s. She wrote about how we all measure parenting success in part by the degree to which we’ve helped our children overcome setbacks. And that as children get older, that task gets harder. Because at a certain point, a child experiences real, adult rejection and heartache (at work; with friends; with true, grownup love) that a parent cannot cure. And treating that wound is exponentially harder than bandaging a skinned knee.

We are now in the middle of college-admission season, and I feel for the parents of kids all over the country who are getting bad news. I have been there, as have most of my friends, and it’s not pretty. You have a child who learns to walk through life, and when he falls, you pick him back up. He falls again, and you pick him up. You do this again and again, and then one day he falls and he’s suddenly too heavy. You can’t pick him up. That’s when his rejection becomes yours; his hurt becomes yours. And there is very little you can do to make it better.

This is the kind of rejection adults encounter that no one talks about, because it’s messy and sad and you can’t cure it by giving a TED talk or writing a charming book. Jia Jiang, I applaud you on your pluck and ingenuity and desire for something more than a comfortable life. And now you get to help–and watch, really, mostly just watch–as Brian grows and thrives and faces his own inevitable rejections. All I can say is: Good luck. 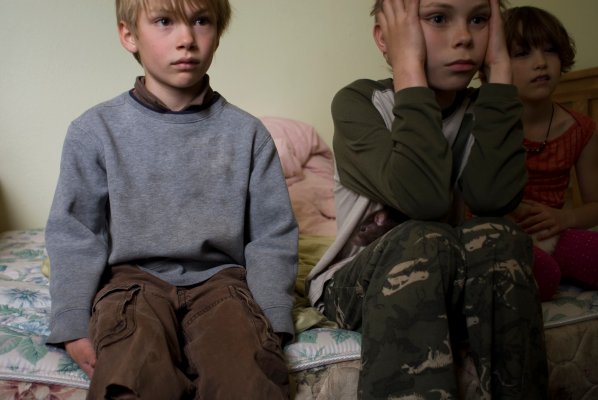 How to Talk to Your Kids About Scary News Events
Next Up: Editor's Pick