The U.S. military is always busy planning for war pretty much everywhere, but some places are tougher nuts to crack than others. That’s why the U.S. Special Operations Command is seeking “Geospatial Data on Countries of Interest for Which There is a Critical Need But Non-Existent Data.”

That sounds a story list on a cover of an old National Geographic (Guangdong—formerly known as Canton—is a province on China’s South China Sea coast. It is the most populous and richest of China’s 22 provinces, and its two leading cities, Guangzhou and Shenzhen, are among the largest and most important in the country).

“USSOCOM has a mission for Special Operations Forces (SOF) to prepare and operate in dynamic and diverse environments,” the announcement says. “Commercial sources and other government agencies have not yet gathered data and information on some countries of interest for which there is a critical need.”

The goal is to provide the U.S. military with satellite maps that chart people—and their activities—as well as topography. The Pentagon calls it “human geography.” Think of it as Google Earth on steroids.

“Contractor will provide geospatially referenced, rectified, socio-cultural data on a number of countries for which there is a critical need but non-existent data,” USSOCOM says. “Research will include, but is not limited to, data that informs customers of the countries’ ethnography, language, education, politics, religion, and economy.”

The U.S. military has long been plagued by cartographic complications. In 1983, American troops invading Grenada had to rely on photocopies of tourist maps. In 1999, an Air Force B-2 mistakenly bombed the Chinese embassy in Belgrade, instead of the nearby Yugoslav Federal Directorate for Supply and Procurement after a string of errors, killing three Chinese.

The Special Ops command plans on expanding an existing contract for the data with GeoEye Analytics Inc., a subsidiary of DigitalGlobe, Inc. (the same folks who recently located a fake Iranian aircraft carrier for the U.S. Navy, who launched a crowdsourcing effort to find missing Malaysia Airlines Flight 370 and who provide satellite imagery to Google Maps). USSOCOM’s statement provided no information on the cost of the original contract or the modification, set to happen Mar. 31; USSOCOM officials did not respond to questions about the price.

“Supporting a wide range of defense and intelligence customers, DigitalGlobe is committed to meeting and exceeding their strategic and tactical requirements and expectations,” the Longmont, Colo.-based company says on its website. “From supporting military actions and national security to emergency management and mapping intelligence, DigitalGlobe supports national and international customers to keep their citizens safe and protect precious resources.”

The contract is sole source. “This unique satellite constellation provides high resolution imagery not available from other commercial sources,” the government says. “Digital Globe purchased their primary competitor, GeoEye, in 2013. The only other competitor is Spot Image, a consortium of foreign state-owned interests led by the French Space Agency, Centre National d ’Etudes Spatiales.” Zut alors! Can’t have that.

“For over 20 years DigitalGlobe has compiled an exclusive in-house archive of over four billion square kilometers of high quality imagery used in high-fidelity geospatial information products,” the government adds (the company is currently photographing more than 3 million square kilometers daily). “DigitalGlobe has a unique satellite constellation for collecting data in areas not available through commercial means…The human geography field is in its infancy and data is non-existent for ‘dark areas’ of the globe and of interest to SOF.” 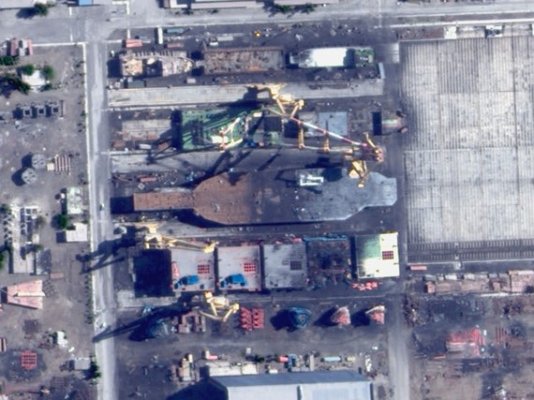 Iran's Building a Mock Aircraft Carrier for a Movie
Next Up: Editor's Pick