Inside the Struggle to Clear Colombia of Mines

A Colombian soldier victim of landmines gets ready to swim, as part of his rehabilitation therapy session in Medellin, Antioquia department, Colombia on March 25, 2015.
Raul Arboleda—AFP/Getty Images
By John Otis/Sonson, Colombia

For decades, Colombian pilgrims have trekked to a sanctuary high into the Andes Mountains of central Antioquia state known as Christ the King. But now parts of the site are cordoned off with red, skull-and-crossbones signs. It turns out Marxist rebels buried land mines just behind the white statue of Jesus and in 2006 one of these booby traps killed a Colombian soldier.

Amid the 51-year-old guerrilla war, vast tracts of Colombian territory have been sown with land mines. They lie beneath school yards, roads, bean fields and cow pastures. Since 1990, these explosive devices have killed or wounded more than 11,000 Colombians, 40% of whom are civilians. These days, only Afghanistan racks up more annual land mine casualties.

That’s why Colombians cheered the March 7 announcement that the Revolutionary Armed Forces of Colombia, the country’s largest Marxist guerrilla group known as the FARC, will cooperate with the Army to clear its minefields. (The Army has already removed its land mines).

“The proposal for demining is a first step, but a giant step towards making peace,” said Humberto de la Calle, the Colombian government’s chief negotiator at peace talks with the FARC that began in 2012 in Havana, Cuba.

The demining accord is the latest sign that the conflict may at last be winding down. In December, the FARC announced a unilateral ceasefire and later declared that it would no longer recruit children under 17 who account for a large part of its troop strength. In response, President Juan Manuel Santos ordered a temporary halt to highly effective military bombing raids on FARC targets. Many analysts view these moves as a prelude to a government ceasefire and a final peace treaty.

“I do not see the FARC leadership returning back to the Colombian jungles and mountains” to carry on fighting, says Alfonso Cuellar, a columnist for the Bogotá newsweekly Semana. “I am optimistic that we have now crossed the threshold.”

Liliana López is also optimistic. She runs a hotel in Sonsón, a farm town near Christ the King sanctuary. During the worst years of the war, rebels kidnapped López’s mother and killed two of her cousins. Now things have calmed down and her rooms are often full. Still, López says leftover mines are hurting efforts to promote business and tourism. “It’s unsafe for people, for children, for animals,” she says.

Most of the mines were planted by the FARC in the mid-2000s. At the time, the Colombian military was engaged in a massive offensive that cut the size of the rebel army in half to about 7,000 guerrillas. Desperate rebel commanders viewed land mines as a cheap, effective way to bog down advancing soldiers.

But farmers, like Donaldo Gómez, are often the victims. A few years ago Gómez was chopping down weeds in his backyard when his machete struck a land mine. It turned out to be a dud. But his 79-year-old father wasn’t so lucky. In 2003, he died after stepping on a mine that shredded his legs.

The ongoing conflict has prevented most formal demining operations so frustrated peasants improvise. Some throw rocks into their fields or cast lines to try to hook the detonators, as if they were fishing. Others sprinkle salt in the dirt, believing that the mines will rust and fall apart.

“They can’t wait for demining to happen so they try to reclaim their lands using unsafe methods,” says Jason Villamil, a supervisor for The Halo Trust, a British organization that has cleared mine fields in many war-ravaged nations.

Two years ago, Halo began a small demining operation near Sonsón. However, the rugged terrain and rainy weather slows things down. Wearing blue Kevlar vests and helmets with shatterproof visors, the deminers inch along, clipping away vegetation and combing the soil with metal detectors. But the FARC’s rustic mines are often made with PVC tubing or glass jars, and contain almost no metal – making them much harder to locate.

So far, Halo has cleared about 125 mines in this region. But there are thousands more out there. That’s why the plan for the Army and the FARC to cooperate in destroying land mines is so important. The rebels know where many of the mines are buried, says a former FARC guerrilla who now works as an advisor for The HALO Trust.

After nine years fighting with the FARC, he says: “It now feels good to do be doing this for a living because I’m helping to get these mines out of the ground.” 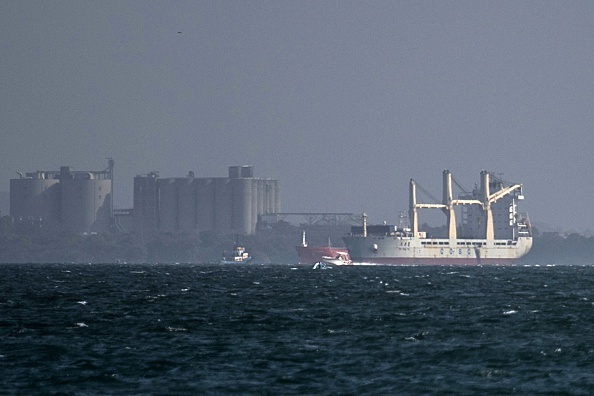 Chinese Ship Detained in Colombia on Suspicion of Weapons Trafficking
Next Up: Editor's Pick