Space: Where America and Russia Are Stuck With Each Other

American astronaut Steve Swanson, left, and cosmonauts Alexander Skvortsov and Oleg Artemyev, are seen as they depart the Cosmonaut Hotel, Tuesday, March 25, 2014, in Baikonur, Kazakhstan, prior to their launch aboard a Soyuz rocket
NASA/Joel Kowsky & Getty
By Jeffrey Kluger

There’s no Crimea in low Earth orbit. That happy fact is one reason that, for now, at least, U.S.-Russian cooperation in space will go on, including a planned launch today from Russia’s Baikonur Cosmodrome, which will ferry two cosmonauts and one astronaut up to the International Space Station (ISS). It’s something of an irony that during the early years of the Cold War, the race to the Moon was the very soul and symbol of the rivalry between the two countries, and now space is the only place America and Russia can stand to be in each other’s company. But it’s not exploratory good-fellowship at work. It’s hard reality—not to mention hard currency.

Start with the currency: Capitalist Russia may be richer than the Soviet Union ever was, but its economy is still a slow, petro-dependent mess. Ever since the last shuttle stood down in the summer of 2011, the U.S. has had no way to get astronauts up to the ISS other than aboard the workhorse Soyuz rocket. Even when the shuttles were flying, our astronauts would sometimes hitch a ride aboard the Soyuz, but seats didn’t come cheap, going for $26 million each in 2006. That fare that jumped to $43 million in 2011 and now that the shuttle program is no more, it’s a tidy $71 million per. When the airlines do it, it’s called dynamic pricing; when the Russians do it, we call it highway robbery. But hey, we always wanted them to try capitalism. Well, this is what it looks like.

For Russia, there’s also international prestige at work. Their space program consists of pretty much the old Soyuz and nothing more—no space stations of their own, no lunar probes, no interplanetary probes. Baikonur itself, which used to be within the Soviet Union, has been part of another country entirely—Kazakhstan—since the Soviet break-up (though as recent event have shown, those post-Soviet borders may be less permanent than one might think). This comes at a time when the U.S. is still the world’s dominant spacefaring nation, China is a rising cosmic power, and even North Korea—Asia’s Toontown—can put a satellite in orbit. If you want to play in the big leagues, you’ve got to have people in space, and the ISS gives Russia some place to send them.

The U.S., meantime, has to tolerate Russia and pay its extortionate ticket prices simply because that’s the only lift around. When you’re hitching a ride to spring break, you’d better be ready to pay for the gas and the Red Bull and put up with whatever’s on the radio. The ISS (despite that International in the moniker) is almost entirely a NASA-built, U.S.-paid-for station, and the hard fact is, Moscow controls our access to it.

That should change soon—even faster now that the political situation is so sour. SpaceX and Orbital Sciences—private American companies both—have already made successful unmanned resupply runs to the ISS and both are also working on upgrading their cargo vehicles to carry people. SpaceX is currently in the lead, though it’s at least a few years away from flying astronauts. NASA is building its own heavy-lift rocket for carrying astronauts beyond low-Earth orbit, but it won’t be ready for anything but test flights until after 2020.

That schedule, of course, could be accelerated considerably if Washington gave NASA the green light and the cash. America’s manned space program went from a standing start in 1961 to the surface of the moon in 1969—eight years from Al Shepard to Tranquility Base. The Soviet Union got us moving then. Perhaps Russia will do the same now. 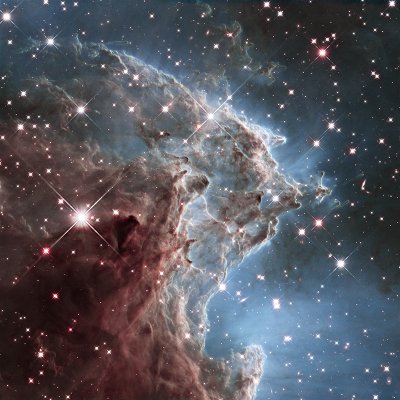 The Hubble Space Telescope observes a grand cosmic nursery
Next Up: Editor's Pick